EHR vendors have officially started canceling their annual user conferences or moving them online, with Cerner receiving coverage in the Kansas City Star. NextGen Healthcare hinted at a move to virtual in their recent earnings call, but I haven’t seen a formal announcement.

I agree that large gatherings, especially those with international attendees, are as Cerner officials noted, “irresponsible and ill-advised.” Epic is still showing their event scheduled for August 24-27 in Verona, with hotel reservations open through June 18. This year’s theme is “The Magnificent Land of Oz,” but I just hope it doesn’t turn into a magnificent viral exposure.

Funds are being granted from the pot spelled out in the CARES Act. The Department of Health and Human Services will distribute $20 million to four telehealth programs for pediatric and maternal care, and two projects focused on increasing the portability of medical licenses across state lines. The grants are being awarded through the Health Resources and Services Administration (HRSA), with two grants of $2.5 million flowing from HRSA’s Federal Office of Rural health Policy to the Federation of State Medical Boards (FSMB) and the Association of State and Provincial Psychology Boards. The FSMB launched the Interstate Medical Licensure Compact initiative back in 2017, attempting to make it easier for physicians to become licensed in multiple states. Those of us whose main licenses are in states that don’t participate are out of luck as far as being helped by the Compact.

Although HHS hopes the grant recipients will “work with professional and state licensing boards and national compacts to develop a streamlined process for telehealth clinicians to obtain multi-state licensure,” it begs the question whether this shouldn’t be for all clinicians and not just those practicing telehealth. I would love to be licensed in multiple states and travel more, but maintaining multiple licenses is a pain and a significant expense. I would love to see medical licensure go national since we have to take standardized national board exams anyway. States can still discipline physicians for improper activities that take place within their boundaries, but let’s free up the licensure pathway.

The remaining $15 million was granted through HRSA’s Maternal and Child Health Bureau, with $6 million going to the American Academy of Pediatrics, $4 million each going to the Association of Maternal and Child Health Programs and the University Of North Carolina-Chapel Hill’s Maternal health Care program, and $1 million going to Family Voices, which is a New-Mexico-based program for families of children with special healthcare needs. The grants are aimed at increasing telehealth services for adolescents, young adults, children with special healthcare needs, and pediatric practices that need to develop telehealth capacity for rural and underserved areas. Other offerings include virtual doula care, remote prenatal care, and behavioral health services.

I’ve spent what seems like a lifetime in bad meetings, many of which are not productive because there are no agendas and no designated scribes. It’s hard to follow up on action items when no one documents them. I was excited to hear about Cisco’s Webex Assistant, which claims to be AI_powered and capable of “everything from automatic note-taking and real-time transcription, to identifying meeting highlights and action items.” I watched their very slick video and have to say I’m intrigued. I’d be interested to hear from anyone who is actually using it. How does it work in real life? Can it handle speakers with different accents? Is it able to parse medical or technical verbiage? Or does it quickly become like Clippy and you just want it gone?

On the flip side, I was on a great call the other night, having been invited to a virtual happy hour with a group of sassy ladies. I’m glad we didn’t have a virtual assistant capturing our conversation because it was wide-ranging, and at least without a transcript, we have plausible deniability. It did get me thinking, though, that Cisco’s product would be even more compelling if you could put it in “snark mode” and have it capture side bar notes such as “Bob’s dog is barking again” and “We can hear the ice cubes clinking in Dave’s glass. Based on the pitch, it’s half empty. Do you think it’s vodka?”

Speaking of slightly stalker-ish software, my clinical employer (from which I am once again furloughed after working a couple of shifts) is offering social medial monitoring as part of its defined benefits plan. The package promises to deliver “actionable alerts when there are any potentially racist, derogatory, vulgar, or inappropriate comments within your social media posts.” Since I know my employer is already monitoring what we post and occasionally asks us to take things down, I’m not terribly interested in giving them or their affiliates any more personal information than they already have. 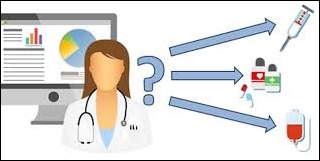 An editorial in JAMA Internal Medicine addresses the topic of “Commercial Influences on Electronic Health Records and Adverse Effects on Clinical Decision Making.” They retell the story of the Practice Fusion opioid prescribing debacle in plain terms that might be news to physicians outside the healthcare IT industry — that the pharmaceutical manufacturer’s marketing team contributed to the design of clinical decision support alerts that promoted opioid prescribing practices that deviated from the standard of care.

The authors call on EHR purchasers to “require vendors to attest that no commercial interests improperly influenced clinical decision support design and that all tools are based on unbiased and clinically appropriate standards.” That might work for out-of-the-box code, but I’ve also seen healthcare organizations and providers themselves manipulate clinical decision support tools, including order sets, to preferentially position services with a higher profit margin for the organization. Somehow we’ve got to get past the place where money is a key driver in the delivery of healthcare. 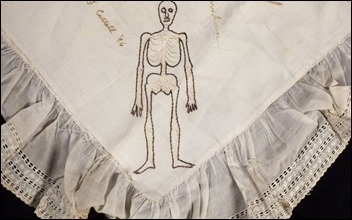 Atlas Obscura is one of my favorite time-wasters, and I’m always intrigued when something medical is mentioned. This entry hit two targets – women in medicine and handicrafts. The pillow sham in question dates to 1896, when a group of graduates of the Woman’s Medical College of Pennsylvania embroidered their signatures along with medical symbols such as a doctor’s bag, a thermometer, and a skeleton. My medical school class was the first at my school that had more women than men, and I am in awe of the women who truly pioneered our path during the 1850s.

For trivia buffs, the Woman’s Medical College of Pennsylvania was the alma mater of “Dr. Quinn, Medicine Woman,” which remains one of my favorite medical TV shows of all time, along with “M*A*S*H,” “Call the Midwife,” “St. Elsewhere,” and “Trapper John, MD.”

What’s on your list of favorite medical movies and TV shows? Leave a comment or email me.