From the Allscripts earnings call, following a Q1 report in which the company fell short of analyst expectations for both revenue and earnings:

MDRX shares closed up 9% Friday, returning the company’s market cap to just over $1 billion. They are down 38% in the past year versus the Nasdaq’s 14% gain. 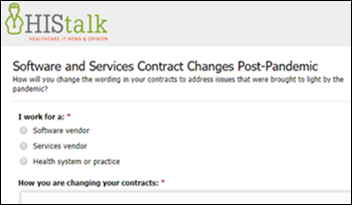 From CPAhole: “Re: contracts. I’m interested in how companies and providers will change their agreements after this pandemic. The typical force majeure clause just doesn’t cut it here.” I’ll run a survey for vendors and customers to describe any changes they’ll make to agreements going forward to address issues that the pandemic has exposed  — like providers being unable to pay their bills, vendors being unable to perform on-site services, or companies protecting themselves in pre-acquisition due diligence. The rarely invoked, usually boilerplated force majeure T&C will undergo new scrutiny and legal tests as pandemic-driven economic issues force vendors and customers into uncharted territory, like HIMSS citing that clause in refusing to issue HIMSS20 exhibitor refunds. 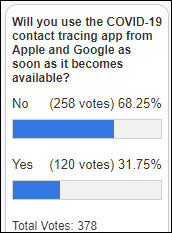 The idea of using tech-powered contact tracing to control the coronavirus takes a hit from last week’s poll. Two-thirds of readers (who are heavily involved in healthcare and technology) say they won’t use the Apple-Google app right away, echoing the likelihood that the US won’t see anywhere near the 60% adoption that is required for effectiveness.

New poll to your right or here: Have you been tested for active COVID-19 infection?

Listening: Michael Kiwanuka, the British singer-songwriter who provides the haunting opening theme to “Big Little Lies,” which we’re watching on Prime Video. It’s the perfect spacey, mysterious intro to a show set on and around the beaches of Monterey, CA. It’s just as connected to the series as the use of Cecelia Krull’s “My Life Is Going On” on “Money Heist.”

Atul Gawande, MD, MPH will resign as CEO of Haven Healthcare and move to a less-operational role as chairman, insiders report. The Amazon – Berkshire – JPMorgan company, which has had minimal healthcare impact since its splashy debut in January 2018, is searching for a new CEO as Gawande’s interests refocus on coronavirus policy and advocacy work. Haven COO Jack Stoddard resigned last year after nine months on the job and was not replaced.

Livongo reports Q1 results: revenue up 115%, EPS -$0.06 vs. -$0.79, beating Wall Street expectations for both. The company said in the earnings call that it has been selected by the Government Employee Health Association that provides medical and dental plans to 2 million employees. LVGO shares are up 42% versus the Nasdaq’s 11% rise since the company’s July 2019 IPO, valuing it a $5 billion. Executive Chairman Glen Tullman owns shares worth $344 million, while CFO Lee Shapiro’s holdings are worth $302 million. 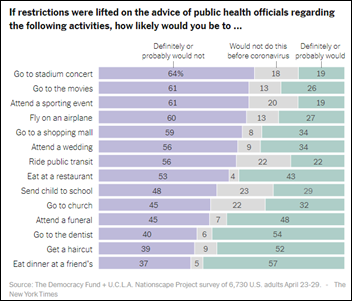 A New York Times report finds that virus-wary Americans had already slowed their spending, traveling, and dining out before lockdown orders were issued, raising the strong possibility that state re-openings won’t restore the pre-pandemic economy as businesses and potential customers remain unconvinced that it’s safe to conduct person-to-person business. 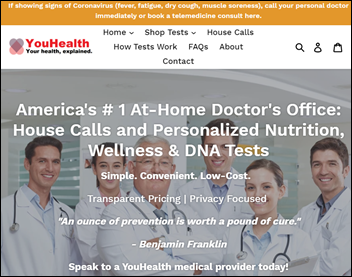 The Department of Justice charges Henry Gindt II with selling stolen COVID-19 test kits directly to patients for up to $200 through his YouHealth website, then failing to provide the test results. Gindt’s LinkedIn says he was a co-founder of President Trump’s Office of American Innovation, where he says, “Key wins included combining the electronic medical records (EMRs) of Department of Defense and VA employees and soldiers.” 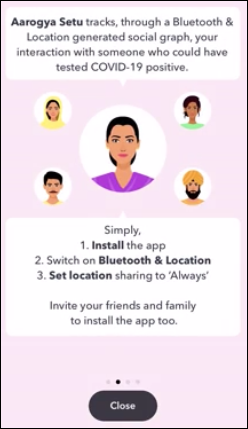 A researcher identifies what he says is a flaw in India’s government-mandated COVID-19 contact tracing app – which uses both GPS and Bluetooth — that allows him to identify the location of all infected users. The government requires all employees and military members to use Aarogya Setu, as well as people who live in containment zones and those who are returning from other countries. The app presents a chatbot-powered symptom checker and travel history questionnaire and health authorities track answers in a database and contact those who might be infected. 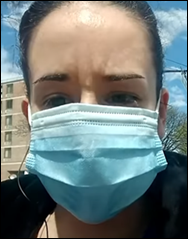 NYC Health + Hospitals investigates ED nurse Lillian Udell, who recorded her co-workers talking about shortages of PPE. The health system says she violated HIPAA even though no patients were shown. Another nurse whose PPE pleas on “60 Minutes” earned the praise of the hospital’s president said of Udell’s case, “I feel like a lot of hospitals are using HIPAA almost under the guise of patient protection and safety, and privacy safety. But really it becomes more apparent to me, at least, that HIPAA is kind of being used to gag people. We’re all experiencing the most difficult working conditions we’ve ever faced. And everybody who is speaking out is doing so to advocate for patients, ultimately. It looks like hospital administrations tend to run to HIPAA for their protection, not so much patient protection.”

Kaiser Health News notes that at least half of the top 10 recipients of HHS’s emergency provider funding have either paid criminal penalties or settled billing fraud charges in the past. Florida Cancer Specialists & Research Institute, which hasn’t started paying its recently imposed $100 million federal penalty for anti-competitive practices, got $67 million in federal bailout money. Experts observe the irony of health systems being paid at rates that are based on their Medicare billing when they were also accused with falsely inflating their Medicare bills through fraud and abuse. Other health systems that are in the top 10 that have paid to settle fraud charges are Dignity Health, Cleveland Clinic, Memorial Hermann, and Mass General. 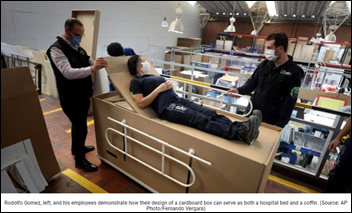 A display company in Colombia offers small hospitals an $85 cardboard patient bed that, if the occupant dies, converts to a casket. 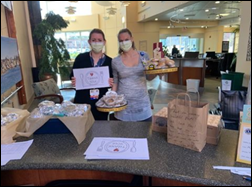