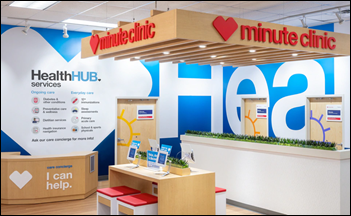 CVS continues its transformation by opening Health Hubs in 13 of its Philadelphia-area pharmacies. The model was piloted in Houston and claims to “put patients at the center of their care” by offering services focused on health and wellness. Nurse practitioners staff the Hubs, along with pharmacists, to offer personalized care.

Although CVS leaders expect this to provide “integrated healthcare,” it remains to be seen how nurse practitioners who may have a limited scope of practice and pharmacists who are already in short supply will be able to effectively coordinate with primary care physicians and subspecialists. If they truly want to focus on controlling costs and delivering effective care, I’d like to see the focus on offering evidence-based treatments and avoiding nebulous “wellness” products, such as aromatherapy offerings. CVS plans to offer the model in 17 states by the first part of 2020. If you’ve had a chance to experience the Health Hub, let me know.

Elizabeth Holmes is in the news again as she represents herself in civil litigation, phoning in for a hearing in Phoenix. Attorneys apparently expect to be paid for their work, and since Holmes hasn’t paid her team in more than a year, her attorneys withdrew from the case. This litigation involves alleged personal injury related to faulty blood testing, with either missed diagnosis or unnecessary treatment as the outcome. Walgreens is a co-defendant in the case, and as the hearing began, Holmes stated that she will rely on the arguments made by her co-defendant’s legal team.

HIMSS is around the corner, and I’m missing Las Vegas. Even though I wouldn’t choose it as a personal travel destination, I much prefer it to Orlando for conferences. The access to restaurants and entertainment is much better in Las Vegas, and frankly, I’m just tired of Orlando. Las Vegas is mixing it up with a change to its marketing tagline, with “What happens here, only happens here” being the latest iteration. Supposedly the marketing agency has spent several years working on the new campaign, which seems like a long time.

I’m always looking for the next cool thing to see at HIMSS, and apparently Epic plans to debut “ambient voice technology” from Nuance at the show. I hope the Epic virtual assistant has a sense of humor like Alexa does, when she chides people who say sassy things to her. Supposedly the assistant, called “Hey Epic,” is being used by 20 organizations. If you’re using it, I’d love to report on your experiences (anonymously and confidentially, of course). Drop me a note if you have information to share. At HIMSS, they’re supposed to debut “conversational capture” along with automatic note creation, so it’s definitely on my booth list.

I’m starting to put together my HIMSS social schedule and have an opening due to one major vendor eliminating its client event this year. I haven’t gotten the backstory on why that happened, but it was always a fun party, with all the executives hanging out with the clients, so it will be sorely missed. I’ve already scheduled some lunches and meetings, so if you’re interested in having the HIStalk team report on your event, send the details our way. We’ll do our best to drop by, anonymously of course.

The Food and Drug Administration is warning healthcare providers and consumers about vulnerabilities in telemetry servers and clinical information stations that monitor patient vital signs. Security flaws can allow tampering with the devices to generate false alarms or silence genuine alarms on patient monitors that are connected to the systems. GE notified clients about the issue back in November, but posted additional information on its website this week. Although the FDA isn’t aware of any adverse patient events, GE is recommending that providers restrict access to the workstations, change default passwords, and isolate the affected devices from the wider hospital network. The interesting tidbit of this story is that the vulnerabilities were reported to GE by a third-party organization (CyberMDX) rather than by a client. It is unclear whether GE engaged them for routine vulnerability testing or how they came to be involved.

Precision medicine is a hot topic, but a recent article shows how difficult it can be to translate those results from the realm of research to the real world of patient care. From a panel discussion at the Precision Medicine World Conference, it appears that although the National Comprehensive Cancer Network offers guidelines on genomic testing, they are not regularly followed outside academic settings. Additionally, physicians and patients struggle to interpret the results of some tests. The results can impact not only the patients, but their potentially at-risk family members. Comparing what happens in community settings to the guidelines, only 8% of non-small-cell lung cancer patients and 40% of colorectal cancer patients received testing according to the guidelines. Panelists call for access to genetic counseling, along with a universal EHR, as potential ways to improve outcomes.

I’m intrigued by a new MyAnalytics feature from Microsoft that purports to give me visibility into my work habits. This week’s focus is on “wellbeing,” which it defines as the ability to “disconnect and recharge” as further quantified by “quiet hours” where I don’t have meetings, chats, or calls outside my working hours as set in Outlook. Apparently it knows that I worked on some documents outside my published work hours. Since this account belongs to a large health enterprise and I’m a contractor, I really don’t have work hours, but it’s fascinating to know that Big Brother is monitoring my work habits. I’ll have to see what the rest of my weekly reports reveal.

From Noteworthy: “Re: another tragedy in California. A vineyard spills 100,000 gallons of red wine. That could have satisfied a lot of thirsty HIMSS attendees.” It’s not only an oenological tragedy but an environmental one, as the wine contaminated the Russian River with the potential to damage water quality along its 110-mile route. The amount of cabernet sauvignon lost would fill eight tanker trucks. Officials note that about 20% of the spill was contained with the vineyard using vacuum trucks and a makeshift dam, but the effort ultimately failed.

What’s your favorite HIMSS beverage? Leave a comment or email me.