From Foundational Confused: “Re: non-profit hospital donations. You’ve said that sending money to them is a terrible use of it. How do you personally differentiate between a foundation doing good versus one just burning money?” I like supporting organizations that truly need the money and will put it to good use for a directly connected social mission. Health systems stretch the definition of non-profit (and certainly that of a charity) with million-dollar executives, vast real estate holdings, and a can’t-miss business model that allows them to charge high prices and stifle competition on the backs of people in need, not to mention that they are so adept at raking in cash that they, themselves donate to other non-profits. My paltry donation would pale to the amount of money they can print via cranking out via high patient charges and collections. I would rather help a smaller, struggling non-profit that doesn’t have the luxury of sticking it to Medicare and insurers, whose mission is in danger of disappearing without outside help and that doesn’t employ mahogany wings full of power-broking suits who spend their day plotting deeper dives into the healthcare cookie jar (I say that while acknowledging the irony that I’ve been part of that particular problem for a long time). My personal donation choices are animal rescue and sanctuary organizations, food banks, Donors Choose, and Salvation Army, where a few hundred dollars can really make a direct difference instead of covering maybe one hour of the HR VP’s time. 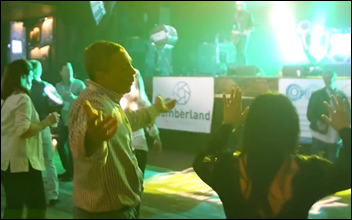 From Party On: “Re: HIStalk reception at HIMSS20. Wondering how to obtain an invite and which evening it will occur.” The tenth and final HIStalkapalooza was at HIMSS17, I’m sorry to say. Maybe we can all schedule a time during HIMSS20 week to simultaneously reminisce by watching the video of that final evening with Party on the Moon and several hundred industry kindred spirits.

Premier is reportedly arranging talks with several potential acquirers in seeking a sale of the company, with reports of its interest sending share price and trading volume up this week. 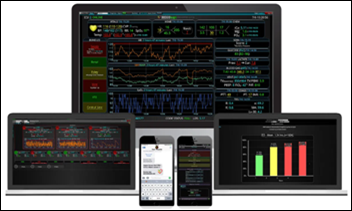 Stephanie Reel, CIO/vice provost for IT at Johns Hopkins University and SVP/CIO of Johns Hopkins Medicine, will retire on July 1, 2020 after a 30-year Hopkins career. She says that she’s channeling Elton John in announcing her “Love Mondays World Tour” and sent me her Thanksgiving letter that outlines her future plans to enjoy family, travel, life in general, and a move from Baltimore after 25 years to Falls Church, VA. Few CIOs have had her tenure and breadth of IT responsibility over one of the country’s highest-ranked health systems as well as its correspondingly highly-ranked university through the impressive growth of both as an unfailingly steady hand on the IT tiller. I’m not saying I “know” her personally, but a couple of interviews and some private conversations about personal issues in which she was generous with her time and offers to assist make her #1 in my book.

John Halamka, MD will join Mayo Clinic (MN) as president of its Mayo Clinic Platform, an initiative he describes as a “portfolio of new digital platform businesses focused on transforming health by leveraging artificial intelligence, the internet of things, and an ecosystem of partners for Mayo Clinic.” Halamka has spent the past 25 years in various positions, including CIO at Beth Israel Deaconess Medical Center in Boston, now part of Beth Israel Lahey Health.

Google co-founders Larry Page and Sergey Brin will step down from their respective roles within parent company Alphabet as part of management streamlining that will see Google CEO Sundar Pichai take on the additional role of Alphabet CEO. 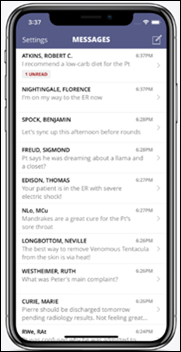 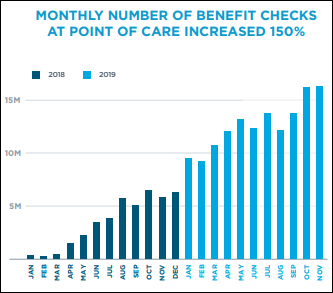 A Surescripts report finds that the use of EHR-integrated prescription price tools more than doubled in 2019, also noting that prescriptions represent 17% of spending on goods and services that are provided directly to patients and are projected to increase 6.3% per year. 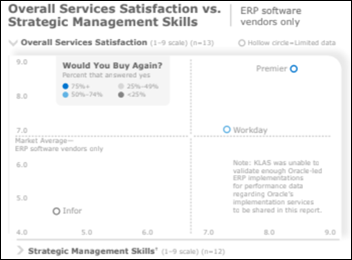 A KLAS report on ERP implementation consulting finds that among software vendors, every Infor consulting services client that was contacted is dissatisfied because the company’s consultants don’t understand the software or how to apply change management. PwC earns high marks from clients; KPMG performs well and Deloitte poorly on Workday and Oracle implementations; and for Infor implementation work, ROI Healthcare Solutions delivers high value while Avaap delivers strong outcomes. 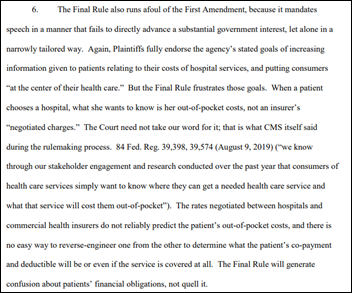 The American Hospital Association and other hospital groups file a lawsuit challenging HHS’s proposed requirement for hospitals to publicly post confidential pricing information. The plaintiffs say that disclosure of negotiated insurer charges would confuse patients about their out-of-pocket costs, adding that the rule is unlawful anyway because it exceeds CMS’s authority.

Physician services firm TeamHealth, which was acquired by investment firm Blackstone for $6.1 billion in early 2017, tells the Senate that it didn’t send surprise, out-of-network ED bills to thousands of patients in 2017 to generate revenue – their real purpose was to pressure insurers into signing more lucrative contracts. It also says that most of the public griping about balance billing comes from patients who don’t understand their coverage and mistake their co-pay, co-insurance, or deductible as a balance billing. The company suggests that Congress require insurers to immediately pay out-of-network providers at 125% the average allowed amount; require them to send the provider a check for the full amount that includes patient responsibility and then let the insurer rather than the provider collect the patient’s portion; cap ED patient cost-sharing at $1,000; and offer arbitration for dispute resolution. 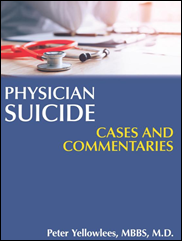 UC Davis will offer an online course titled “The Health and Wellbeing of Medical Providers,” which will be taught by UC Davis Health Chief Wellness Officer Peter Yellowlees, MD, MBBS (yes, he did earn both degrees years apart even though they are basically equivalent). The 20-CME, $800 course begins on February 24. The course text, “Physician Suicide Cases and Commentaries,” was written by the instructor. 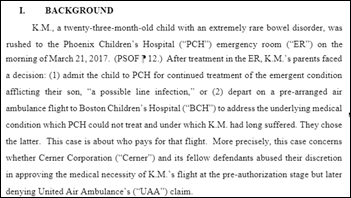 Cerner loses a $600,000 lawsuit that was brought by an air ambulance company after Cerner’s health plan refused to pay for a toddler’s air ambulance transportation after initially authorizing it. 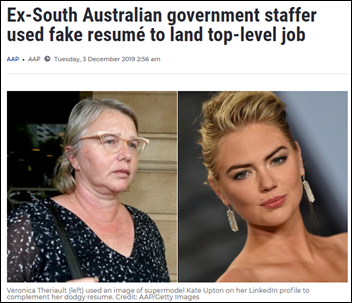 In Australia, a women is sentenced to 25 months in prison for falsifying her application for a high-paying government CIO role. She lied about her education and work experience, gave herself a glowing recommendation in posing by telephone as a former employer, and used a supermodel’s photo as her LinkedIn headshot. Her attorney blames her actions on being “off with the pixies” due to stopping her weight loss drug.