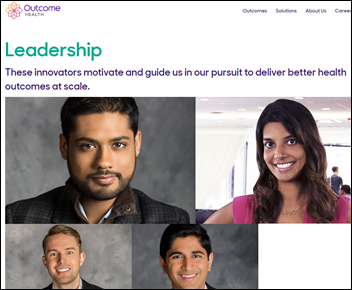 Federal prosecutors charge the two founders and two other executives of waiting room advertising technology vendor Outcome Health with fraud, claiming that the company inflated its revenue over a six-year period to help it raise $1 billion in funding, of which at least $225 million went directly into the pockets of the founders. 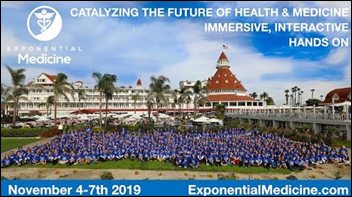 From Dr. Herzenstube: “Re: Exponential Medicine conference earlier this month. I’m wondering if any HIStalk readers went and can comment on whether it’s worth the astronomical price tag?” The Exponential Medicine conference was held early in November at the Hotel del Coronado in San Diego, with a registration fee of $4,750 and “favorable rates” offered to non-profit and government employees. It’s run by TED-aspiring Singularity University, which despite its name and .org web address, is a for-profit company rather than a real university, offering programs to rich executives instead of poor students. The web page is a thicket of buzzwords (“curate,” “reimagining,” “blockchain,” and “recharging” at yoga sessions and dinners under the stars) and speakers ranged from the mildly interesting to the clearly self-promoting, entertaining the junketeers who lived it up far from the prying eyes of their patients who are being bankrupted by their expense-bloated bills. I’m sure everybody had a good time, though.

From Eriksson: “Re: Cerner in Sweden. See this article.” The ComputerSweden article says that Region Skåne has postponed its Cerner implementation because the company has failed to understand the extend of Millennium changes that are needed to support the Swedish Patient Data Act. The region chose to store its data in Cerner’s cloud – unlike another region that is hosting its own system locally – and US cloud data protection is too weak to comply with Swedish law. Cerner has proposed sending patient data to 12 of its business units across nine countries, but the region wants processing of its most sensitive patient information to be performed within Sweden. The impact of the EU’s more stringent approach to privacy is creating interesting challenges for vendors based in the US, where privacy requirements are often contained in negotiated contractual terms rather than in enforced laws. Some of Sweden’s requirements:

From Insider: “Re: KLAS. Changing vendor scores right as we approach final submissions for Best in KLAS. Scores from the question added earlier this year, ‘Does this vendor consistently exceed your expectations?’ will be eliminated from the scoring algorithm, effective today. It will be restored to the algorithm on July 1, 2020 to give all clients who were interviewed within an 18-month window the chance to answer this question before it affects a vendor’s KLAS scores.” Seems reasonable, although you wonder why KLAS walked its decision back and why it didn’t anticipate problems. Timing might suggest that some lesser-performing vendors complained once they saw how their scores would be affected.

In the spirit of Thanksgiving, here’s an anonymized, excerpted version of an email that a reader  — a former big-time CIO and industry long-timer whose name you would recognize unless you’ve been living under a rock — sent to Lorre this week, which touched her (and then me) deeply in putting life into perspective:

I want to say thank you to Mr. H and associates for this really valuable blog. I became disabled a while ago from a head injury that forced me to retire from healthcare, with a long road to recovery. Your blog helps, as it challenges me to remember stuff (my memory is episodic) and to get up to speed in the never-ending drama we call healthcare here in the US.

I’m distracted today by the sharply divisive debate that has been raised by the AP Stylebook’s Twitter – do you “pre-heat” the oven or do you just “heat” it? I would argue that you do neither and rather “set” the oven and wait until it reaches temperature (since you’re heating the food, not the oven), but given the choices, I’m going with B since I also don’t like the terms pre-authorize, pre-arrange, pre-board, pre-medicate, pre-order, pre-pay, pre-wash, and pre-record for the same reason — “pre” doesn’t modify the word, but rather is a lazy shortcut to what should be a procedural instruction (heat oven to 350 degrees, then put in the turkey). I dislike “pre-existing conditions,” but I don’t have a better replacement unless it would be “pre-coverage conditions,” and but even then you might have had coverage, just with a different insurer.

Politico calls out the well-funded effort by healthcare’s profiteers to shut down anything that looks like socialized medicine (such as Medicare for All), including the American Hospital Association, America’s Health Insurance Plans, individual insurance companies, biotech companies, Chambers of Commerce, health systems, and trade associations. Their talking points, which omit the real motivation of preserving the patient-funded golden goose, are that Americans would lose choice (like they have a lot of choice anyway), everybody would be forced into a “one size fits all” system, and Americans would pay more and wait longer for worse care. The AMA has pulled out of the group, with the remaining members publicly accusing it of caving in to the liberal left. Healthcare companies spent $568 million lobbying the 535 members of Congress in 2018 alone, more than any other industry, and their bucks seem to be working since nobody is doing much to upend the healthcare cash register.

Google Health posts a video describing the EHR search project it is doing with Ascension. It contains a mock-up of the combined information dashboard, which to my eyes looks little different from the standard tools provided by Epic, Cerner, and other EHR vendors, with the biggest differentiator that it combines information from multiple EHRs for those ever-expanding big health systems that are in perpetual replacement mode. The search function could be useful depending on how much intelligence powers it beyond simple text string scanning. The doctor who’s narrating is Alvin Rajkomar, MD, who is coming up on three years with Google, but also continuing his practice as a UCSF hospital medicine attending. 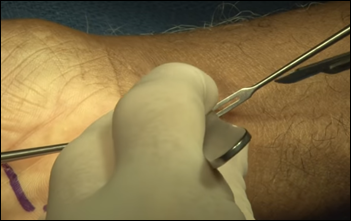 CNBC reports that medical students and residents are teaching themselves to perform surgical procedures by watching unvetted YouTube videos. The article cites a study of 68,000 videos that show how to perform a fracture procedure, of which only 16 met even the most barebones criteria, such as identifying the on-camera person who was doing the teaching. UCSF’s Atul Butte made a good point on Twitter about potential oversight, however – textbooks aren’t regulated and at some point you have to trust your doctor for choosing appropriate learning material. After all, the surgeon who would have taught them in person could have been incompetent.

A study finds that US life expectancy, unlike that of most wealthy countries, has declined for three straight years after 60 years of increasing longevity, with key contributors being midlife drug overdoses, suicides, and organ system diseases. I suppose the glass half full side of the argument is that this is an indictment of our society, not our hospitals, and even the authors dismiss our dysfunctional health system as a cause and instead point to lack of social and support systems, poor education, and lack of living wages, all of which lead to “deaths of despair.” The largest number of excess deaths occurred in Pennsylvania, Ohio, Kentucky, Indiana, and Florida. 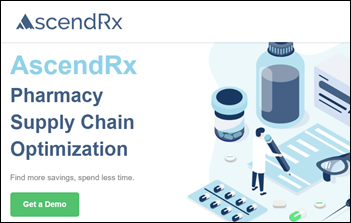 Medical University of South Carolina says drug purchasing software that was developed by one of its IT network engineers is saving it millions by looking for the best price in the supply chain at any given moment. It has spun the company off as AscendRx, with the former IT employee Jonathan Yantis serving as CEO. I would tell you more, but the company’s Squarespace website returns a “Website Expired” error. 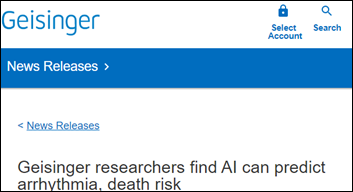 Geisinger says its researchers can predict arrhythmia and death using AI analysis of ECG data, but our HIStalk AI expert Alexander Scarlat, MD provides a critique, which should always be employed before believing any attention-seeking AI headline since it’s never as straightforward as it sounds: 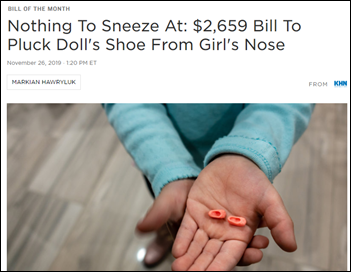 This is the best “excessive hospital charges” story ever. A three-year-old girl sticks a shoe from her Polly Pocket doll in each nostril. Her mother was able to remove one of them with tweezers, but the urgent care was unable to extract the second one and advised taking her to a Dignity Health hospital’s ED. Mom says the doctor there removed it within one second, having had ample practice with slippery Tic Tacs. She was billed $2,659 ($1,732 for the hospital, $927 for the doctor) and her family is stuck paying the full amount because of her high-deductible insurance plan. The hospital declined to provide the methodology behind its price, but scolded Mom in an emailed response to a media inquiry that she should have understood her plan better and gone to urgent care. Medicare would have paid the hospital $101, which you could argue is either a defense or indictment of why they charged her more. By the way, Dignity’s CEO made $10.3 million last year, the CIO made $2.3 million, and 27 executives exceeded $1 million in compensation.