The Investor’s Chair Returns to HLTH: The Good, The Bad, and the Kind of Weird

Loyal readers might recall I attended the inaugural HLTH Conference last year and, as I wrote here, came away pleasantly surprised. I eagerly returned to see how its second edition would play out.

The questions bubbling through my mind on the flight were: Is it really, as its website claims, “the largest and most important conference for health innovation?” Can it really cope with “6,000+ attendees and 6,000+ 1:1 Meetings?” And once again, do we really need another conference?

Our esteemed Mr. HIStalk told me when I e-mailed from on site that he was “slightly surprised that HLTH rebounded after its disastrously ill-informed decision to immediately follow HIMSS in Las Vegas.” With all due respect, I disagree with that assessment. As I wrote last year, HLTH follows the formula of its founders’ previous and very successful conferences, Money2020 and ShopTalk. Part of that formula, I believe, is making it easy for people to come and party together.

Don’t get me wrong, I have no great love of Vegas except when comparing it to Orlando, but it’s easy to get to, relatively affordable, and perhaps most importantly, exceptionally easy to navigate, with lots of venues near the convention center to drink, dine, and debauch. If it ain’t broke, they won’t be fixing it.

HLTH already announced Caesar’s Palace for next year (rather than Boston, as had been previously announced). I don’t view Vegas as a misstep, but exceedingly on-brand. For HLTH, not for actual health – I get more secondhand smoke there then the rest of my year combined. 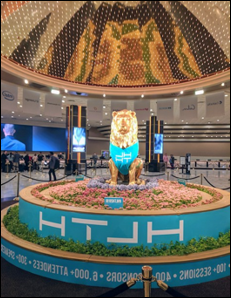 If nothing else, HLTH thrives on branding, and in doing so, creates for the most part a great user experience. I arrived at the MGM Grand and was greeted by its famous lion, this time dressed for the occasion! I checked in and was handed a Livongo-branded key. HLTH is in many way, a perfect conference for Livongo to be a top sponsor – interesting, yet slightly over-promotional. LVGO is the lowest market cap company sponsor, and why UPMC as a not-for-profit health system sponsored at the top level is another interesting question. 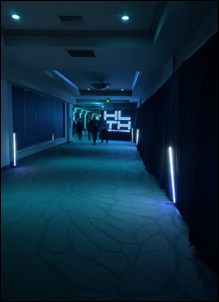 I opted to arrive after Sunday’s sessions and accompanying party and so began my day on Monday, walking through a dark tunnel and new age music to emerge at the light at the end of the tunnel ,which was of course HLTH. Perhaps a bit dramatic, and I honestly don’t know if this was supposed to represent birth (long, womblike corridor) or even death, but it definitely was … kind of odd, at least to me. Someone later said app company and sponsor Calm was responsible, but absent any branding, it just seemed rather outré. 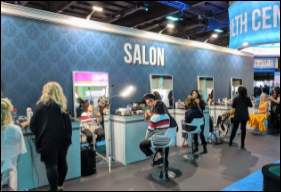 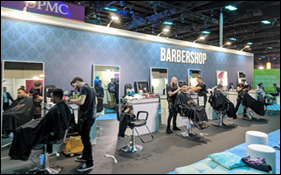 Speaking of kind of odd, this was the first time I’d seen hair-cutting options in an exhibit hall! Perhaps I’m old school, but I get my hair cut before conferences. Both men’s and women’s sides were occupied most times I walked by. Someone told me a presenter mentioned them on Sunday, pointing out that for poorer communities, barber shops and salons were key places to impact social determinants of health (SDOH was, of course, a big theme at HLTH), but given that I saw no obvious branding nor could the haircutter I asked tell me who sponsored, I’ll have to take their word for it.

Reports on content were more varied than last year. One attendee described them as, “more like TED Talks than actionable ideas.” Another observed more commercials from the podiums as opposed to accurate portrayals of what the companies are actually accomplishing.

In talking to a mid-level marketing professional of an exhibiting company, he said he would definitely exhibit again next year, but the attendees weren’t his true target market like those who attend smaller, benefits-focused events. Rather it was “vendors talking to vendors,” albeit 70% vendors as opposed to the 90% he had feared it might be.

That said, much of the target market here is folks who serve vendors (bankers, investors, and consultants) rather than folks who actually purchase goods and services from vendors. If you’re looking for the former, though, this is a great place to find them. 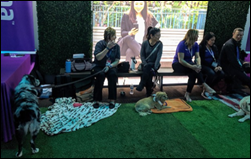 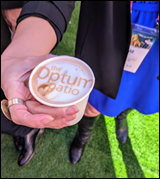 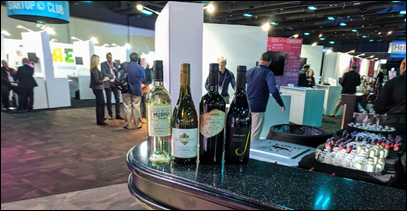 More of the good. The exhibit hall wasn’t the overwhelming boat show that HIMSS has become. Booths were smaller and it was possible to have a conversation. As with last year, there were also meeting pods on site outside the exhibit hall for those that sponsored them, of course. Optum had a fabulous outdoor patio area with conversation spaces, fresh squeezed orange juice, and a coffee truck with branded foam.

When it came time for the reception, this Sonoma-dwelling correspondent was actually quite pleased with the quality of the wines on offer. Finding all this networking and disruption all too stressful? Aetna’s booth had actual certified emotional support dogs to pet and cuddle. I tell you, people just don’t realize how hard we all work to make healthcare accessible! 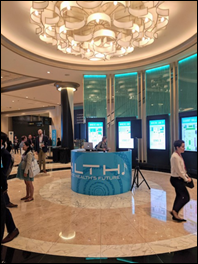 Some of the bad. Elements were a bit too contrived, self-impressed, and vaguely, as another few attendees commented, millennial. For example, one hopes people are actually there to work, and networking definitely counts as working. That means, in my opinion at least, that a DJ blaring is not a value-add. This unfortunate music trend persisted throughout. The full conference sessions had intro music that I could feel in my chest and fillings, and worse still, at the very end of HLTH was the reception for Women in HLTH. It’s an important event with unfortunate timing – you’re really important, but also dead last after the majority of attendees have cleared out.

After the final panel, it was time for a brief networking reception, and again there was music playing throughout and clearly above background level. News flash – we’re here to connect and learn and excess music does not help! (#getoffmylawn)

More importantly, beyond the company commercials from the speakers, there was an element of self-congratulatory behavior that I found somewhat off-putting. John Moore of Chilmark Research, an industry analyst I admire greatly, commented in his excellent blog post that the best talk was Mark Cuban’s, in which he told people that they “weren’t truly disrupting their business.”

I think that’s a real problem with healthcare today and HLTH is just a more glaring symptom. With all due respect, while healthcare is in dire need of disruptive change, disruption for its own sake is hard, and in fact, dangerous. I’ve spent the bulk of my career observing healthcare IT and have learned the hard way that the challenge is adoption, not disruption. And even adoption is hard.

An article on Stat News last April said it more eloquently than I can: “The most glaring deficiencies don’t stem from a lack of technology or creativity or innovation. Many shortcomings could be solved by adopting widely recognized best practices and committing to a handful of mundane, lifesaving processes. Think surgical checklists, timely removal of central venous catheters, and adoption of safe birth practices.” But not only are those ideas not disruptive, they’re unlikely to raise venture dollars any time soon. 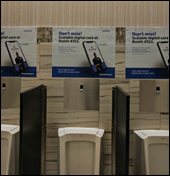 More of the weird: Even more startling than the long dark corridor or the haircut opportunities, I personally thought using toilets as branding sites was kind of bizarre! “Don’t Miss,” heh heh, yeah, not so much. There were similar signs on stalls and over sinks, but this was a bit too much (and I like puns as much or more than the next blogger.

The bottom line: once again I ask, what is the future of “The Future of Healthcare?”

As I observed last year, from an attendee perspective, HLTH was incredibly well organized. Helpful staffers abounded, there were plenty of places to convene along with a plethora of phone charging banks (sponsored, of course), and a definite “who’s who” vibe going on. More than one attendee “bemoaned” the fact that this was likely becoming another “must attend” event like the JP Morgan Healthcare Conference (JPMorgan).

To put it another way, HIMSS is Macy’s (at best), JPMorgan is Mall of America for healthcare (pharma, biotech, devices, services, HCIT, and more), and HLTH is more like Nordstrom’s. As an aside, Health Evolution Summit is kind of like a pricy boutique on 5th or Michigan Avenue.

The bottom line on having multiple conferences is that I don’t think that the hotels and restaurants of the City of San Francisco need fear attendance loss to Vegas, rather that people might have a few more brief “meet and greets” at HLTH, allowing for more substantive meetings nine or 10 short weeks later. Recall that only a small percentage of those who “go to” JPM actually attend the conference itself; rather they hang out in coffee shops and bars and meet with other folks who come in for the exact same reason.

Overall, I admire both the organizers and their investors. We didn’t know we needed this conference until they created it,  kind of like mobile data and iPads. HLTH more than met my expectations and I’m glad I went. The conference was well attended and had a good range of professionals from all sectors, younger in many ways than HIMSS or JPM, which is a nice contrast. It won’t replace other industry conferences, but it will augment.

That said, a common complaint I heard was that it was less intimate than last year. I heard a rumor of over 10,000 expected next year, and maintaining user experience and a degree of intimacy in the face of that kind of growth will be a real challenge. As another conference organizer has observed, everyone wants intimacy, but everyone also wants to be able to attend, and I don’t know how to reconcile those two goals.

On the other hand, I haven’t successfully sold two earlier conferences for astronomical sums, so they clearly know things about this topic that I do not. Will it be like other short lived events like MS-HUG (remember when it had its own conference?) or TEPR (which I’d frankly forgotten until reading about it in John’s post’s comments), or will it become the newest pilgrimage that FOMO (and fun) requires people to show up for? I look forward to 2020 back in Vegas to see how it evolves.

Ben Rooks has now attended every HLTH, 25 HIMSS, 10 HESs, and JPMorgans as far back as its H&Q Days. He’s also been proud to write this column for HIStalk for over a decade, albeit not often enough, so feel free to e-mail him questions or ideas for future installments. He also really enjoys his day job at ST Advisors.