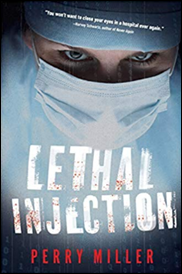 A reader correctly predicted that I would like “Lethal Injection,” which he accurately described as an “informatics murder mystery” that came out in June 2019. That reader is a former colleague of the author and recognized in his book subtle references to the hospital and anesthesiology department in which they worked.

Author Perry Miller, MD, PhD is an anesthesia professor emeritus at Yale School of Medicine and founder and previous director of the Yale Center for Medical Informatics and its biomedical informatics research training program. He earned his medical degree at University of Miami , an MS at Cal Berkeley in electrical engineering and computer science, and a PhD in computer science from MIT.

It is remarkable that the book is Miller’s first foray into writing anything except research papers. The book is fast paced, flows perfectly, and contains few of the common flaws that often cause me to put a book down for good when the literary awkwardness distracts me from the story.

The book leads off with a flurry of action in which the CEO of academic health system Boston Central Hospital dies while undergoing cardiac surgery at Laurel Hill Community Hospital, which Boston Central is taking over.The anesthesiologist in the CEO’s surgery case is the wife of the protagonist, ED doc Gideon Lowell (the author has a lot of fun with his first name, which isn’t entirely random as he explains in the appendix). She is immediately targeted as a suspect when investigators find that a syringe that was labeled as vecuronium actually contained something else that killed the patient when she injected it. Lowell launches his own investigation, partly because of his patient safety background, but mostly because he wants to prove that his wife wasn’t responsible.

A good page-turning crime mystery starts by introducing several suspects with various motives, then keeps you guessing at who did it until the climactic end. Miller does a great job in weaving a tale of who might have wanted to see the CEO dead. Laurel Hill employees resent having Boston Central know-it-alls running around in preparation for the takeover. Partners in Laurel Hill’s contracted anesthesiology company stand to lose hundreds of thousands of dollars per year via lower academic salaries. Also present are the usual hospital soap opera issues of romantic entanglement, bullying, and doctor back-biting, not to mention hospital greed in performing questionable but lucrative surgeries. In other words, it is realistic.

Miller adds some fun IT flourishes that are vital to the story – spoofed hospital emails, intentional disclosure of EHR patient information, medical records tampering, and the fact that Laurel Hill was ripe for takeover because a botched billing system implementation caused revenue problems (that part of the book isn’t described believably, but it’s not crucial to the story). Then we meet an old friend of Lowell who is a cybersecurity expert who offers to help, a somewhat clueless risk management lawyer, a medical group programmer, a quality assurance manager, anesthesiologists whose character flaws range from laziness to hostility, and an investigative reporter who starts probing into Laurel Hill’s clinical problems.

This book flows really well, contains fun hospital insider knowledge, and probably scares laypeople who will wonder whether hospitals really are greedy and whether doctors could be so vain, insecure, and hostile to employees and to each other. Reading it is a pleasure, not a chore.

A few changes could have made the book better:

“Lethal Injection” grabs the reader’s attention in the first couple of paragraphs and doesn’t let it go until the end, demanding furiously fast reading to see how the story unfolds instead of easy savoring of carefully crafted details and back-stories. I can’t imagine that it’s easy for any author to create such a book, much less a first-time author. It’s quick-hit entertainment that won’t leave you thinking about the characters afterward, quoting new facts you learned, or pondering its hidden meaning or the meaning of life.

Perry Miller is an excellent writer and I’m awaiting his next work.

The Kindle version of “Lethal Injection” was a steal at $0.99. It would be the perfect read for traveling health IT folks who need something engrossing to read on planes or in hotel rooms, knowing that they can pick up where they left off easily if interrupted.