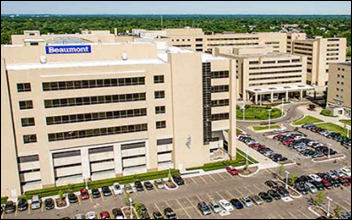 The Detroit business paper covers this year’s layoffs by Beaumont Health, the most significant of which involved IT and revenue cycle employees.

Those employees who were let go probably won’t appreciate executive comments that all healthcare systems “are reorganizing their operational platforms” and that while 175 people lost their jobs this year, 4,235 were hired.

The health system is spending tons of money on the acquisition of Summa Health, hospital construction, and the opening of 30 urgent care centers.

Beaumont Health’s most recent year’s tax filings show a loss of $3.9 million on revenue of $4.4 billion. The CEO was paid $5.6 million, while the departed CIO made $1.3 million.

From Google Pyle: “Re: Google Health. LinkedIn has people listed as being on its advisory board. I thought it Google Health was dead.” I’m not sure what Google Health even means now that the failed personal health record of that name was retired in 2011 and much the company’s healthcare projects placed under Verily. It may be that “Google – Health Advisory Board “ was the intention rather than “Google Health – Advisory Board.” I emailed a Google press contact hoping to clarify what Google Health is these days and who serves on its advisory board, if it still exists. I’m not holding my breath for a response. I don’t get too excited about advisory boards (as opposed to actual boards of directors) since companies often choose high-profile people just to pick their brains and maybe try to sell them something instead of relying on them to provide actual sound advice in return for compensation.

From AngryMD: “Re: Epic. Rebrands its anesthesia product ‘Flo’ and its infection control product ‘Bugsy.’ Can you stop wasting our time with these inane name changes and work on improving the software we’re spending millions on?” I’m a fan of Epic’s product names, which like the company’s campus, are clever, whimsical, and integral to the culture you’re paying for as a customer whether you like it or not. Judy Faulkner still picks the product names herself as far as I know, so I doubt any developers were harmed in the making of this movie. I don’t hear many complaints about Epic lagging on support responsiveness or development timelines, but I’m always interested in the physician user perspective. What would you say the company’s top priorities should be?

In an unrelated note, I just discovered that Epic has some great-sounding cafeteria recipes on its site, including a chocolate espresso mousse that is similar to the five-minute Bailey’s Irish Cream pots de crème that is my go-to dessert when I’m cooking.

From Sue Schadenfreude: “Re: Meditech. As you noted, newly named Meditech President Michelle O’Connor has only ever worked at Meditech, and unlike most of the company’s execs who have only undergrad degrees but several from MIT, hers is from a state college. Hoda Sayed-Friel has been moved off to the side to start a professional services division. Always interesting things happening there.” Meditech is starting to hand off to the next generation of executive leadership (O’Connor is second-youngest of all directors and officers at 52), although its youngest board member is 65. This might serve as a preview of how Epic’s next generation will be installed since the companies are similar. Meditech values tenure, with its most recent annual report listing these executives and their start date (imagine still being the rookie suit after nearly 30 years with the company):

From Cohesive Summary: “Re: AI in medicine. Why do technologists persist, decade after decade, in focusing on diagnosis rather than solving problems that people actually want help on? What springs to mind is finding ways that billing could be at least partially automated.” Startups, investors, and consumers grossly overestimate the incidence of misdiagnosis, maybe because it’s always been an easy programmer’s target to match up a set of symptoms with possible diagnoses even when the result changes nothing. They could probably save 100,000 times more lives by tackling problems that directly influence outcomes, although that’s a much fuzzier area than a computer-generated a-ha moment of dramatically announcing some weird but correct diagnosis. Precision medicine might be a good compromise, but even that isn’t likely to move the public health needle much. Perhaps the biggest reason for missing the point is that technologists are mostly young, can’t fathom death or disability, and have the money to bribe their way around healthcare’s velvet rope, so they may be oblivious to the concept of public health and the societal cost our inferior version of it creates. I also speculate that those same companies are overly focused on population health and patient engagement as the nail their technology hammer can easily pound, failing to understand that even cleverly designed and customized automated messages aren’t likely to improve the outcomes of those among us with the greatest healthcare needs. The idea that patients always do fine once properly diagnosed is dangerously naive, as is trusting providers to first do no harm even with the best of intentions. Also naive is the idea that companies and healthcare organizations will value the consumer’s interest over their own.

I belatedly realized that I omitted the most obvious option in last week’s poll – leaving the patient data-selling situation as-is. Otherwise, respondents most often chose requiring the patient’s explicit permission, paying them, or not allowing their information to be sold at all.

New poll to your right or here: how much healthcare innovation will result from Cerner’s partnership with Amazon Web Services? Click the Comments link after voting to explain yourself.

A chance radio encounter with Deep Purple’s magnificent 1972 “Machine Head” deep track “Pictures of Home” led me to mount a Spotify exploration of their contemporaries, which sent me to the catalog of Iron Butterfly. They put out quite a bit of awful, unfocused dreck after their label rushed them into non-psychedelic follow-ups to “In-A-Gadda-Da-Vida,” but some gems shine through and their influence on future metal and hard rock bands is obvious. Fun fact: guitarist and former child prodigy violinist Erik Braunn – part of the classic 1968 Butterfly lineup along with Doug Ingle, Ron Bushy, and Lee Dorman – was only 17 when he played on “In-A-Gadda-Da-Vida” and concerns about his age cost the band their chance to land Jeff Beck and Neil Young as members. Dorman later co-founded another band I like, Captain Beyond, which is still around albeit carrying only a trace of its DNA with drummer Bobby Caldwell as the only original member. Iron Butterfly keyboardist and vocalist Ingle, in my mind the band’s key member, is long retired at 73, but is still on the preferred side of the dirt.

I just realized today that Microsoft Windows has properly faded into the background of my daily routine, finally outgrowing its maddening stage as an exuberant puppy that chews shoes and pees on the floor into a contented companion that never lets me down. I can’t recall the last something about Windows frustrated me.

I was thinking today that the most successful technologies either (a) help you do something you want to do, such as stream movies or play games; or (b) make it easier to do something you’re required to do, such as fill out tax forms or prepare presentations. Most apps that fall under the “digital health” category do neither.

Here’s a look at how the recent health IT IPOs are doing:

Security firm ExtraHop warns that an unnamed medical device management product – intended to protect privacy over hospital WiFi – was actually phoning home to its vendor in connecting to its cloud storage system, which the security firm says is a strict HIPAA violation. 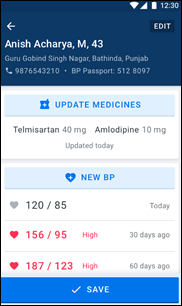 I saw a tweet about Simple, an open source Android app and web dashboard for providers to manage blood pressure measurements and meds, created by the philanthropically supported Resolve to Save Lives.

Vendors might want to take a look at this developer productivity booster, an AI-powered auto-complete add-in that supports 22 programming languages.