Book Review: The 10 Principles of a Love-Based Culture 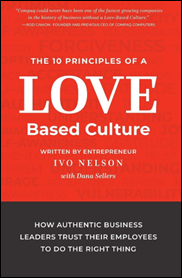 Industry long-timers Ivo Nelson and Dana Sellers hit a couple of massive health IT consulting company home runs. They created Healthlink and Encore Health Resources and then sold them to large companies in 2005 and 2014, respectively. Those brands have disappeared, existing only as a fond memory for the former employees who ended up working for companies (IBM an Quintiles as the original acquirers) whose corporate culture was considerably different than that of the “love-based” companies that are described in this book.

The title of this book will likely limit sales volume. It sounds pretty hokey, like those self-help books written by self-proclaimed gurus that can’t deliver on the title’s promise. I cringed every time I read “love” in the book because it doesn’t seem to fit what the book is actually saying. My observations:

The book’s subtitle is better even though it’s no more actionable: “How authentic business leaders trust their employees to do the right thing.”

A lot of health IT books are poorly produced. Authors use a vanity publisher or ghost writer, don’t hire a skilled editor, skip performing research in favor of just spitting out folksy non-wisdom, or scrimp on the physical production of the book. The result is embarrassing, or at least should be — a lazy way to check a resume box in hopes of finding a better job or adding “author” to join the questionable “speaker” or “thought leader” on business cards.

This isn’t one of those books. It is well written, edited well, and designed and printed professionally. It’s a real book, in other words. It isn’t super long at just over 200 pages in the hardcover edition, but it has good, easy-to read stories and examples.

I’m struggling to understand the intended and desired outcomes of this book. Ivo and Dana created two consulting companies that grew like crazy. Starting from scratch allowed them to hand-pick their co-workers and to intentionally create and maintain the culture they wanted.

Most of the book’s ideas don’t seem to fit well with larger organizations: companies whose culture isn’t easily changed (which I suspect is nearly all of them); those organizations that sell products rather than services or to consumers instead of to other businesses; and for employees who aren’t in a position to change culture.

I’m picturing the average reader wishing that they could have worked for Healthlink before IBM screwed it up or that they could quit their jobs and find the rare employer that embraces even some of the 10 principles. The biggest takeaway for many readers might be that their employer is not a great place to work.

Healthlink is the example given through the book. Ivo sold that off to IBM in 2005, so a critic might question whether what he and Dana learned there 15 and more years ago is applicable and relevant now. They did it again with the more recently formed Encore, however, so that’s a plus even though it was still in the go-go industry years that have cooled off considerably since.

The book mentions that Healthlink spawned at least 15 CEOs who carried on with a love-based culture. Hearing their stories would have been enlightening. What kind of companies are involved? What cultures existed, if any? Which Healthlink principles did they find useful and which did they skip? Were any of them involved with larger companies and thus on the hook for delivering quarterly results and changing a culture at large scale? Did they apply what they had learned at Healthlink to a turnaround situation? What kind of personalities did they have and how did that affect their leadership style?

Ivo and Dana say in the book that Healthlink’s culture wasn’t necessarily designed up front – it happened on the fly as a by-product of the team they assembled. I’m not so sure that a CEO would read this book and suddenly vow to make personal and corporate changes that would make their company look like Healthlink, especially if they didn’t create the company in the first place. Nor am I sure that I would expect great things from a CEO who had to learn concepts such as empathy and employee satisfaction from reading this book.

In short, would any of theses ideas actually work if Ivo and Dana weren’t involved? I’m not so sure. They give themselves too little credit in the book. Consulting is a people business, Ivo and Dana have a long industry track record and a Rolodex full of contacts to earn services business, and they are obviously outstanding entrepreneurs.

Ivo says that the opposite of a love-based culture is a fear-based culture. That’s the type of employer that nearly all of us know. The book provides a checklist to determine whether your workplace is fear-based, which I can assure you is both enlightening and depressing. Your boss thinks they are smarter than everyone else, people are promoted and paid illogically, everybody is afraid to speak up, and corporate backstabbers play a zero-sum game in trying to diminish everybody else to improve their own standing.

The challenge is, what do you do having read the book? Send a copy to the CEO and hope for the best? Demand that the CEO change the culture? Find a new job working for a company whose culture is love-based? You’ve read this book and are thus enlightened — then what? I worry that readers will be able to recognize a fear-based culture while simultaneously realizing that it is unlikely to change.

What Would Have Made This Book Better?

I interviewed Ivo as he and Dana were getting Encore Health Resources off the ground. It’s one of my favorite interviews because Ivo is honest, reflective, and likeable (we would all love to have Ivo or Dana as our mentors, no doubt). Just about everything he said was worth considering and remembering, but this stuck with me most:

I’m perfectly happy with having an expectation that says we’re going to hire really good people and we’re going to do great work for our clients and the growth is going to be whatever the market has to give us. If this is a 30, 40, or 50-consultant company in five years and we’ve got 100% referenceability and we’re considered the place to work in the industry and every time I talk to a consultant they tell me how much they love working for Encore, I consider that to be a grand slam home run.

If it’s 500 people and we’re not providing great services to clients and we’ve got people quitting because they hate working for Encore but we’re making a ton of money, I’ll consider the company a huge failure. Dana and I, we really just want to build a really good company that clients can be proud that we’re working for them and our consultants can be proud to say that they work for Encore …

Having been acquired and watched other similar companies get acquired, too, I think it’s extremely difficult to take a people company like a consulting firm and have cultures meshed with a technology company that’s more asset-based …

This is nothing more than me doing what I love to do. If it leaves a legacy, I think that’s OK, but I’m not sure what you really get out of that. When I’m hopefully up in my 80s or 90s and I pass away, the people that are going to come to my funeral are going to be my family. It’s not going to be clients. It’s going to be people that are close to me personally in my personal life, my kids and my sisters and a handful of friends probably that I have. That’s a legacy.

I asked Ivo several questions about company culture, starting a company, and consulting vs. other businesses. It’s worth a read to get to know him better. His philosophy is simple, although I think his ability to strategize, execute, and sell is always understated and he is disarmingly unaffected in person.

I would have enjoyed reading a company history of Healthlink or autobiographies of Ivo and Dana and this book contains some of those elements. Still, I found myself wishing for a broader range of stories that weren’t necessarily chosen to back the questionable argument that the 10 specific principles can be easily implemented to guarantee business success. I don’t think it’s nearly that straightforward.

You now know the 10 principles. You know that the book contains a lot of Healthlink anecdotes. You understand that Ivo and Dana have created some great businesses in somewhat unconventional ways. You therefore have enough information to decide whether you are likely to get $15 worth of useful ideas or entertainment from “The 10 Principles of a Love-Based Culture.” My guess is that you probably will, even if you aren’t convinced that a company can just flip the switch on a nice, round number of love-based principles and find Healthlink-like success. It’s a fun read that contains enough information to be useful to nearly everyone in business.

Ivo and Dana need to write more books. Cover topics that distill a lot of practical knowledge that CEOs need. Write anonymized stories about mentoring CEOs and observing their boards and executive teams in action. Find a large company with a fear-based culture, help the CEO turn it into a love-based culture, and describe the process and results. This book proves without a doubt that Ivo and Dana have a lot of good information and are highly capable of presenting it well.