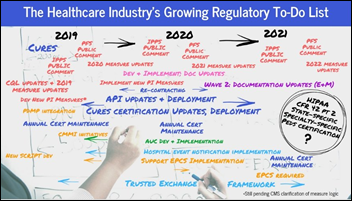 The Health Innovation Alliance this week said the rule is too vague and contains too many loopholes, recommending that ONC and CMS “go back to the drawing board.”

More than half of poll respondents say vendor and hospital burnout in health IT is caused by excessive workload and time pressure rather than organizational, management, and compensation issues. Furydelabongo says that work overload could be a symptom of having incompetent or overly ambitious managers, while Drex cites the nearly universal absence of good IT governance in hospitals that encourages employees work at whatever tasks they believe are important or that executives complain the loudest about.

New poll to your right or here: What method did you use the last time you communicated directly with a doctor who was providing care to you? I’m looking for your most recent exchange, the final one in your most recent encounter.

Listening: new from NF (Nate Feuerstein), a 28-year-old, Michigan-based, Eminem-influenced rapper whose lyrics are emotional but commendably free of profanity (a change he made in 2010, saying that he’s Christian even though his music is not) and misogyny. His vocal rhythms immediately embed themselves in your head even if the lyrics don’t. The link is for “Let You Down,” which is not only a dramatic video, but also a powerful song about the strained relationship between a disappointed father and his son who has bitterly decided that their superficial relationship is over.

SailPoint earns a US patent for its application of AI/ML to identify peers among system users to detect those whose access profile is unusual enough to warrant review for potential security concerns.

Eric Topol notes the nearly identical, relentless price increases for competing best-selling injectable arthritis drugs Humira and Enbrel, which generated a combined $28 billion in 2018 sales. Today’s price is more than double that of 2012, with cash-paying patients paying more than $5,000 per month even with the best coupon offered by GoodRx. The cost is much less in the UK, which doesn’t allow endless drug company patent filings and lawsuits that block competition for biologic drugs.

CDC reports that the number of US measles cases has broken the 25-year-old record even though we’re only halfway through the year. Measles is classified as “eliminated” in the US, but that achievement is at risk for the first time in a generation. 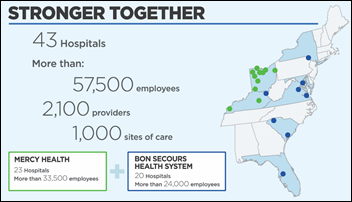 I’m fascinated that Cincinnati-based Bon Secours Mercy Health will sell its majority stake of an RCM company it bought for $60 million in 2016 for $1.2 billion. The Catholic health system, former in September 2018 with the merger of Mercy Health and Bon Secours Health System, had just announced its merger with Ireland’s largest healthcare provider, a five-hospital system in Dublin, with intentions I don’t quite understand (unless they’re using Ireland’s favorable tax status to benefit their for-profit ventures).