AliveCor extends its ECG lead (no pun intended) over Apple with KardiaMobile 6L, which offers a six-lead ECG and expanded detection of arrhythmias including atrial fibrillation, bradycardia, and tachycardia.

The $150 consumer device has earned FDA clearance, works on both Apple and Android devices, and will reach the market in June.

From Unconjoined Twin: “Re: Medi-Span. Hit by malware. We can’t do our monthly medical loads to Epic.” Verified, although I missed this when it first came up a week ago. Netherlands-based Wolters Kluwer released a statement Monday saying that it has restored most systems – which include CCH cloud-based tax systems and other applications in addition to healthcare — after it took them offline after discovering “the installation of malware.” Discussion on Reddit says the company’s website was down, along with its Internet access, email, and phones, with one person indicating that two of their employees received emails from a Wolters Kluwer email address that contained malicious links. A Krebs on Security report says file directories that are used to store new versions of its software were found to be writable by anonymous users, at least one of whom apparently uploaded suspicious files.

I’m increasingly annoyed by big health systems that suddenly claim they’re passionate about empathy, post-discharge care coordination, patient engagement, innovation, social determinants of health, and patient experience. Why now? They could have done those things at any time and didn’t. They were fat and happy until threatened by disruption and possible payment changes that threaten their massive bottom lines, so now they are suddenly the self-proclaimed experts and advocates. At least they are providing a good reminder that health systems do only what someone pays them to do, which isn’t necessarily the right thing. Maybe we need a tech innovation that dispenses dollar bills every time a doctor washes their hands or doesn’t prescribe an unnecessary antibiotic. 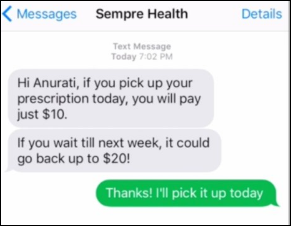 Business Insider looks at startup Sempre Health, which texts patients to offer them cash savings if they fill their new prescription quickly. The discounts are funded by drug companies as an alternative to drug coupon programs. Co-founder and CEO Anurati Mathur was a data scientist at Propeller Health and before that at Practice Fusion.

Collective Medical enhances its platform to enhance collaboration among physical and behavioral providers by adding a consent feature that complies with CFR 42 Part 2. The combined efforts of a physician group and community providers in using the system reduced 911 calls by 44%, EMS transport by 47%, ED visits by 36%, and hospital admissions by 42%.

Storage array vendor Infinidat, whose systems use disk-based storage with memory caching, creates a software-defined flash array called Epic Compatibility Mode that it hopes will allow it to earn Epic certification since Epic does not allow disk-based storage for performance reasons. 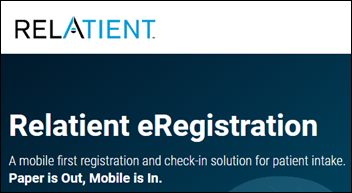 A medical laboratory sales rep receives a 50-month prison sentence for Medicare fraud after he used a sham non-profit group to convince seniors living in low-income housing to submit to genetic testing. He recruited two healthcare providers via Craigslist to provide phony documentation, netting the three co-conspirators $100,000 in commissions from two clinical labs.

A doctor who followed the suggestion of a conference speaker on social media to Google herself is shocked to find 100 negative reviews and comments that had been left on Vitals, Healthgrades, and Google, with none of the reviewers being actual patients but rather anti-vaccine activists who targeted her because of a social media comment she made in support of a colleague who was undergoing vaccine-related cyberbullying. None of the three sites removed the ratings until she got her lawyer involved. I notice that Healthgrades has removed the fake reviews, but the nut jobs have now just thumbs-downed them, while WebMD still has nearly all one-star reviews. A pediatric practice that posted a video recommending the HPV vaccine had its webpage as well as outside ratings websites flooded with 10,000 negative reviews and comments, while the Facebook of an internist who simply mentioned that his office had received its flu vaccine shipment was bombarded with hundreds of comments accusing him of poisoning children. We live in a shaky society when people can muster up so much ignorance and anger over a flu shot.

Well said. It’s not the job of a business to tell customers how to reconfigure their lives for the convenience of the business. The “problem” isn’t that of patients. 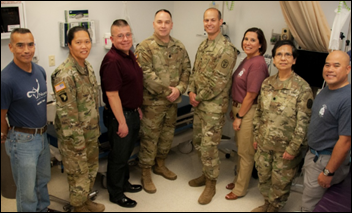 The Department of Defense profiles eight senior Army nurses who worked together early in their careers at William Beaumont Army Medical Center. Among them is WBAMC CIO/CMIO Lt. Col. Rich Clark (fourth from left in the photo above), who says, “Even though I work in IT, being a nurse helps bridge the gap between the physicians and IT. We look at IT from a clinical perspective now, to support the clinicians. I love coming to work every day, no day is ever the same. For us it feels like yesterday that we were in the operating room and medical ward. It’s not just the camaraderie, but it’s the mission, too. We’re taking care of America’s sons and daughters. It’s not about the money, it’s about the role and the impact that you can make.”