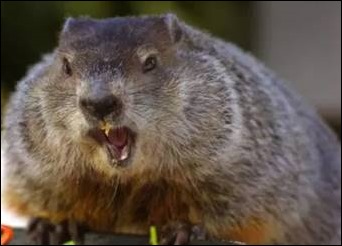 As much as we complain about our technology, there are days when I’m glad to have it. This week was one of those, when I was confronted with multiple patients who had been exposed to wild animals and I had to quickly determine whether rabies exposure was a risk in our area.

Barely a decade ago, this question would have required a fair bit of research and possibly a phone call to the county health department. Although we determined that being scratched by a squirrel wasn’t considered a risk factor because the incidence of rabies in the squirrel population in our area is relatively low, apparently the largest reservoir in our area is the woodchuck. I always thought they were a slow animal that doesn’t do much, but apparently when they are rabid, they will chase people. I’ll be on the lookout for any deranged woodchucks on my upcoming outdoor adventures.

It’s also fantastic to have data from the Centers for Disease Control at our fingertips – where we are in the current influenza season (almost done!), how many people have died this year (fewer than 55,000 compared to last year’s 80,000), and what the current recommendations are for our patients who are traveling to various parts of the world.

When I work with physicians who complain about having to use computers in the exam room, I challenge them to think of ways that computers are beneficial and how they might learn to better use the computer as part of the patient visit rather than fight it. Even the most reluctant physician can usually think of a handful of positives.

Some of the concerns I hear from physicians are part of a larger issue with organizational dynamics. I was pleased to see a recent editorial in the Journal of the American Medical Association addressing the need to build trust as part of relationships between clinicians and healthcare organizations. The authors note that although many books cover this in the business world, there is little addressing how it impacts clinician relationships with their employers or sponsoring organizations. They note that we have likely arrived at this place of mutual distrust due to the size of many healthcare organizations and the insertion of management layers between frontline clinicians and senior leadership.

Often changes that are being driven by payers or the market result in hostility towards organizational leaders. I see this often in the EHR trenches, as providers fail to fully understand the role of government mandates and payment incentives / penalties in driving EHR use.

The authors also cite poor communication as a key reason for lack of trust. I agree wholeheartedly with that assertion. I still see organizations that have fractured communication pathways. This may result in chain-of-command communications that reach clinicians at different speeds and sometimes not at all, or inconsistency in the messaging.

During some of my interim CMIO engagements, I’ve seen meetings canceled with no explanation, which leads to feelings of uncertainty and a lot of time spent by invitees in trying to figure out why it was canceled or whether policy has changed. It’s unfortunate because a simple explanation with the meeting cancellation would have created a lot of goodwill – “canceled due to schedule conflict, will be rescheduled” would go a long way to silence what I’ve seen turn into full-blown organizational conspiracy theories.

They note other drivers of distrust, such as “poorly conceived or implemented electronic health records, competing interests, and misaligned incentives” that add to the confusion. Other factors include a perceived lack of clinician input, overly rapid changes to processes or metrics, administrative burden, and inadequate support staff. They also note that clinicians struggle to buy in when standardized care processes are discussed along with other changes that might negatively impact clinician autonomy.

I agree with the authors that it is easy to violate trust and extremely challenging to rebuild it. They call on organizations to engage “leaders who are visible, available, and responsive and who know how to develop and foster positive relationships.” Having worked with several boorish leaders over the last several years, I’d also suggest that leaders be educated on their constituents and how they will perceive anecdotal stories that the leaders might throw out.

I worked with one CEO who constantly talked about his ski trips, his sailboat, and his house in Jackson Hole. Let’s just say that didn’t resonate with primary care physicians who were driving 10-year old Hondas. Nor did the story about the year he took off work to coach his son’s baseball team. Some background research on what made that particular group of physicians tick or what their economic status was might have been helpful and would have saved everyone a bit of angst.

I enjoyed the section that mentioned that “marketing slogans are no substitute for a clearly articulated purpose that is consistently and continually reinforced through action and policy.” One well-known health system had a campaign around “world’s best medicine made better.” What does that mean, exactly? What is the goal? How do frontline physicians play a role?

The authors note that although trust is a two-way street, “organizational leaders are best positioned to take the first step in establishing trust. Clinicians are unlikely to shift from suspicion and disengagement to being fully trusting unless they experience leaders who are trustworthy, but also must act in ways that engender trust.”

I was surprised that there weren’t more comments on the article, only one that identified lack of departmental meetings as a driver of distrust since face-to-face interactions were reduced. We used to have quarterly medical staff meetings at our hospital that were a big deal, with a catered sit-down dinner. Big issues were discussed and the majority of the medical staff made a point to be there. However, as costs were cut, those dinner meetings gave way to lunch meetings, which disenfranchised those of us who didn’t practice on the hospital campus. Those were in turn canceled due to “poor participation” and what used to be a vibrant discussion was reduced to the occasional email blast telling us about the hospital’s priorities.

I’m interested to hear what readers think about the state of trust in healthcare organizations. What is your organization doing well? What could use improvement? Leave a comment or email me. And watch out for rabid woodchucks.