It’s time for a trip through the reader mailbag. I apologize that I’m not able to respond to emails as often as I’d like, but sometimes it’s hard to manage not only a full-time job but my HIStalk gig and the volunteer work I do. I love hearing from readers and I feel like I’ve really gotten to know a handful of them even though we’ve never met or spoken. I’m always impressed by the thoughtful comments that people send my way.

Props to Epic’s MyChart team, who reached out to me in response to last week’s Curbside Consult detailing my experiences with Share Everywhere. They are concerned that it seems to not be working as designed and offered to troubleshoot it for me. I don’t want to risk de-anonymizing myself by revealing the institution, but they did have some good questions to help me further explain what I’m seeing so they can take a look.

I also asked them to help me understand how patients are supposed to report issues since the hospital hasn’t seemed interested in the past at hearing about technical problems I was having with the billing side of MyChart. I would be interested in hearing from readers at other Big Health Systems on how they handle patient concerns about their patient-facing systems, whether Epic or not. It might make for a good post.

A reader sent some comments on my experiences with Share Everywhere vs. MyChart, further illustrating the issues with client-configurable features.

Like many tools made available by Epic, the healthcare organization makes choices and configuration decisions regarding MyChart, Care Everywhere, Share Everywhere, and Lucy. At our organization, problems, allergies, medications, test results and immunizations are all displayed with date information at the summary level as well as at the visit or encounter level. I had not looked at Share Everywhere for some time and was surprised that we do not display provider office notes in the Share Everywhere view. We do make office notes available to our patients, however. We need to explore whether this is an Epic limitation or a configuration option that we have not enabled. New functionality that we are almost ready to enable is sharing radiology images across the Care Everywhere network. Again, Epic provides the capability, we are responsible for configuring and enabling as is every other Epic customer that has chosen to participate in Care Everywhere. We also must choose to make incoming images available to our caregivers, just as other organization will need to decide if they choose to accept and make available images.

No props for the handful of emails I found in my box from people asking if I’m interested in guest posts from the people they represent or asking how they can contribute to HIStalk. It’s immediately obvious when I see those that they’ve never actually read the site or they would know about Readers Write.

Props to the couple of people who reached out to wish me a happy Doctors Day. Although it’s celebrated on March 30 in the US, other days are used in other countries. For example, Iran commemorates it on Avicenna’s  birthday, at least according to Wikipedia. In the US, it recognizes the anniversary of the introduction of general anesthesia using ether in 1842. I’m truly glad we don’t have do bite-on sticks after a slug of whiskey and that we now have less-flammable options.

However, I’m giving negative props to the American Academy of Family Physicians, whose celebratory email offered a discount on AAFP products and conferences, but only for the day. Most physicians I know have AAFP communications routed to their work email addresses and it was a Saturday, so I wonder how many takers they had. I would think they’d have a better handle on how busy their members are and consider offering the discount for at least a couple of days to allow people to take advantage of it.

One of my favorite correspondents sent some thoughts on interoperability and mental health and substance abuse data. They also sent their comments around my mention of the Duke whistleblower settlement:

As to whistleblowing, I was much more idealistic in my youth and pointed out issues to people in authority at my institution that I thought were problematic (generally related to serious patient safety issues, occasionally compliance issues).  Suffice it to say, these minor attempts at whistleblowing never went well for me and never resulted in any significant changes either. I’ve been tempted to “drop a dime” on my hospital to Joint Commission or the department of health, but they always seem to eke through CMS visits with immediate jeopardy in the balance, so the likelihood of any action on a higher scale seems minimal.  It is clear that hospital and departmental leadership can be vindictive to people who throw shade on them despite touting a “just culture.” Without an airtight case, which is virtually impossible to get, whistleblowing seems like more trouble than it’s worth. For every person who gets a big cash payout for whistleblowing, I’m sure there are many more well-intentioned people who will struggle to find another job as a result of their efforts.  For these reasons I’m much more circumspect in my old age and focus on flying under the radar and not making waves.

I’ve had that experience as well, being branded as “frequently dissatisfied” in an evaluation by one member of my residency’s faculty because I used to bring suggestions for improving the program or making things better for the learning environment. I learned quickly that they didn’t see feedback as a gift and that any suggestion would be received as a criticism. Needless to say, when I was selected to be chief resident, my first order of business was to implement the majority of things I had been asking for since I was an intern. Rumor has it that the “New Intern Handbook” we created that year is still in circulation, providing information that no one tells you in medical school, such as how to pronounce a patient dead when you get that call in the middle of the night.

On the topic of EHRs being responsible for the downfall of the patient-physician relationship:

Not too long ago, our group surveyed members and only one person made any remarks about the computer and that was “the EMR sucks.” Everyone else mentioned low salaries, poor communication from leadership, deteriorations in workplace safety and increased staff injuries, excessive emphasis on RVUs, and lack of respect for clinicians by leadership. I really don’t believe EHRs are the root of all evil.

I didn’t have to worry about anonymizing the comment, since those are the same issues I heard at the last meeting I attended of my hospital’s emergency medicine attending physicians.

I’m going far into the wayback machine on this one, but I posted in February about my flashback on the Addressograph machine. Apparently extinct technology is a hot topic:

The addressograph brought back memories! One of my first tasks in healthcare was to write program for the machine that produced those cards. We reprinted those cards every other day for inpatients because the numbers and letters would wear out. Later when I was in management I worked to replace them with stickers. The ward clerks did not want to give up their addressograph machines!

Addressographs were definitely a lot of fun! (Though the smell wasn’t quite as good as freshly printed mimeograph,) They were also very practical in terms of quickly getting an index card with the key patient info at the top that could be used to keep signouts much more efficiently than our current electronic physician handoff page. A saved index card was also like gold when the patient bounced back, unlike the current physician handoff that gets deleted at discharge.

I had forgotten about those signout pages. For those of you who are not on the provider side, when the resident physicians leave for the day, they sign out to the on-call team, which is responsible for covering patients they may never have met. In the olden days, we would meet with the on-call resident before we left the hospital. We would pull those sheets from our white coat pockets and give a brief rundown on the patients we had been caring for. The sheets might have included med lists, labs, problem lists, and other tidbits of information that would help the on-call team know what to do if an issue came up with the patient. Some of us even got fancy and created templates for our sheets to ensure we wouldn’t forget important information. The size limitation forced you to be concise and only focus on the most important information, which is probably becoming a lost skill from the voluminous charting we have in the EHR.

Another reader waxed poetically about dial up modems:

I also found there was something satisfying about hearing the sounds that meant your modem had connected and the old acoustically coupled dialups (where your phone receiver went into the rubber connector) were very amazing at the time.  It definitely beat standing in line at the computer center with a giant stack of keypunched cards (praying that you didn’t drop them and have to put them back in the right sequence.) 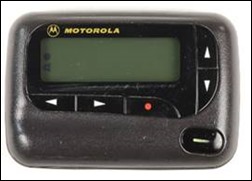 The “antique” technology that had the most mentions isn’t antique at all since it’s still in use at many hospitals — the beeper:

My favorite old technology has to be the old versions of beepers. When I was an intern, beepers just beeped. Nothing else. You called the paging operator and they gave you your message. These beepers had two advantages: you could cross your arms in a boring lecture and surreptitiously turn them off and back on again, which would make them beep. Then you could quickly escape to go outside to the hall phone and address your “page.”

The Motorola Adviser was my workhorse pager during residency, and according to one reader:

It has been granted eternal life. We still have them (and fax machines). Everyone has been saying for years that we should switch to cell phone “paging,” but there are cell phone dead zones and the beepers have much better coverage.

I’m closing up the mailbag for now. Keep those virtual cards and letters coming!