Big Data continues to be a buzzword and I enjoy hearing about novel applications. The Journal of the American Medical Informatics Association recently published an article covering a system that uses online Yelp restaurant reviews to identify foodborne illness. The system is currently in use by the New York City Department of Health and Mental Hygiene to monitor for foodborne illness complaints. It classifies review based on whether they indicate illness, and if so, whether multiple people are involved. It has identified 10 outbreaks and over 8,500 complaints.

Missouri is the only state in the US that doesn’t have a Prescription Drug Monitoring Program, and Governor Mike Parson has indicated he’d like to sign legislation that is “long overdue.” Parson, a cattle farmer by background, came into office following the resignation of the former governor following a scandal. He’s keenly aware that the state is the only one without it, although friends practicing in the state tell me that St. Louis County launched its own database that aggregates data for a large portion of the state. Maybe they can harness the existing system rather than re-create the wheel.

My state’s PDMP has helped me in the clinic more times than I can count, so I feel for those who don’t have access to the tool. Missouri also recently approved marijuana for medical use. When I called my former classmate to ask her about the PDMP situation, she noted that her office received 20 phone calls about it the day after the election. Good luck to those of you in the Show-Me State.

Speaking of controlled substances, a US Food and Drug Administration panel recommended this week that physicians who prescribe opioid drugs should also prescribe the overdose reversal drug naloxone. This would lend itself nicely to order set and clinical decision support functionality, although there’s quite a bit of debate as to its necessity and the amount it would add to overall healthcare spending.

There’s also debate about patients getting naloxone added to their pharmacy profiles since that data can be used for other purposes, such as life insurance underwriting. NPR recently reported on a nurse who was denied coverage because she carries the drug as a healthcare provider who is willing and able to use it should she come across a patient experiencing an overdose. The issue highlights the dilemmas faced by many of us in healthcare, where even the best-intentioned ideas can have numerous downstream consequences.

Users, beware: SplashData has published its annual list of the 100 worst passwords of the year, based on five million leaked passwords found on the internet. The worst offenders continue to include “123456” and “password.” Other new entries on the list include “donald” (which debuted at number 23 and may be inspired by our Commander in Chief), “sunshine,” “princess,” “charlie,” and “!@#$%^&*.” The old standbys of “admin,” “welcome,” and “iloveyou” remained on the list, although I’ve never been enamored of my computer or my job enough to consider the latter option.

Dr. Jayne’s inbox has been flooded with announcements from various companies who plan to participate in the JP Morgan Healthcare Conference in San Francisco. There are usually some interesting keynotes at the conference, whose attendees are clients of JP Morgan. It looks like there are several hundred presenters from startups to the usual big players. Another round of press releases will follow the actual conference, including transcripts and sometimes recordings of the presentations, so I have that to look forward to. I’d be interested to hear from anyone who has attended including what they thought of it and if they learned anything that they couldn’t glean otherwise.

A shout-out to Jenn over at HIStalk Practice and her coverage of medical-themed holiday decorations at her local hospital. If you’re not including HIStalk Practice in your regular news roundup, you’re missing out. 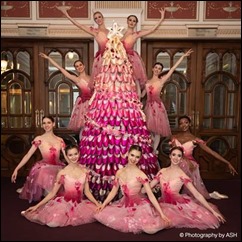 Workplace-themed trees aren’t unique to healthcare, such as this one made of used pointe shoes at the English National Ballet.

Jenn also clued me in to the rise of private equity funding in the medical apparel space, with recent funding of scrub manufacturer Jaanuu. The company has raised $25 million to date. The Nordstrom family also participated in the recent funding round. Although making scrubs and lab wear more fashionable is a goal, they’re also working to use odor-eliminating, water-repellent, and antimicrobial-treated fabrics to increase functionality. Company founder Sethi Young notes that medical professionals “need a ‘uniform’ that’s not uniform at all – no one style, fit, or fabric is going to be what you need to do your best each day, every day.”

It seems to me that perhaps there’s a disconnect between the company’s vision and the realities of work within a hospital, medical office, or other clinical setting. Workers don’t necessarily get to choose what they’re going to do each day, but rather need clothing that can handle anything that’s thrown at them in an often-unpredictable environment. I don’t wake up envisioning, “I’m going to have to suture a lot of lacerations today, better wear the stain-fighting pants in case I drip Betadine on myself” or wanting to be glammed-up by my scrubs. The initial thought that there’s a disconnect was reinforced when I read of their desire to become a “lifestyle brand.”

I’m going to stick with my sub-$40 lab coats and the durable scrubs that I know I can just about boil. I’ve been wearing scrubs for the better part of two decades and have had hospital-issued ones, personally-purchased ones, high-performance designs, extra-cheap designs, and one double-breasted scrub top I had to wear during a transplant team trip that made me think I was in a sci fi movie. I guess I’ve been lucky that I never felt that they had a “negative psychological impact” while I went about doing my job.

The only problem I’ve ever witnessed with ill-fitting scrubs was during an emergency C-section, when the pregnant obstetrician had her overly large scrubs pulled up above her belly. When she ran down the hall, they slid down, almost making her trip. Since they were hospital-issued, OR-mandated scrubs, it’s not like she could have strolled in wearing fashion maternity scrubs.