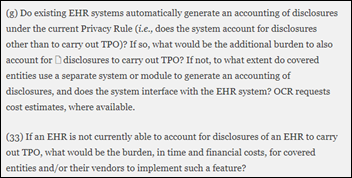 HHS OCR issues an RFI for help in identifying aspects of HIPAA’s privacy and security regulations that may be impeding value-based care and care coordination.

OCR is also looking at how long it takes for patients to get copies of their medical information, whether the currently allowed 60 days is too long, and whether covered entities should be required to give patients copies of their electronically stored information faster.

Also in the RFI is an important clue about OCR thought process – they want to know if providers are refusing to share PHI for treatment purposes or are requiring requesting providers to fill out request forms that go beyond HIPAA.

The long document is mandatory reading for those who follow HIPAA requirements and information sharing.

From Med4295831: “Re: Greenway Health. Sent an email this week to all customers recommending that they file a MIPS hardship exemption for 2018 because Prime Suite’s Promoting Interoperability measures were calculated incorrectly.” Unverified, but the reader sent the email he or she says they received.

From Grand Delusion: “Re: PokitDok. One of several HIStalk sponsors being acquired. Thoughts?” We’re seeing the usual industry consolidation, but it does seem that my sponsors are often involved, for which I can offer these potential reasons: 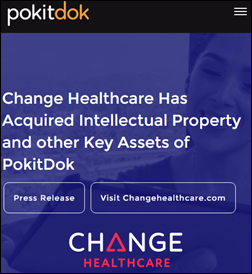 Change Healthcare acquires “intellectual property and other key assets” of health IT API and blockchain vendor PokitDok,  which Change will use to launch its API and Services Marketplace.

Canada-based health IT vendor Premier Health will acquire Cloud Practice, which offers an EHR based on an open source product developed by McMaster University, for up to $5 million, most of it in tiny-capitalization shares whose price has swung wildly between $0.04 and $0.85 in the past year. 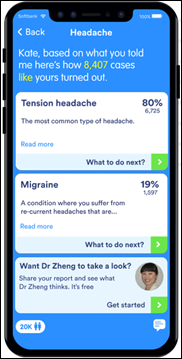 K Health, which offers a free AI-powered, questionnaire-driven app for consumers that uses a “People Like Me” history database, raises $25 million in a Series B funding round, increasing its total to $38 million. The company’s business plan apparently involves eventually selling its service to employers and placing referrals to paying doctors. The Israel-based company, formerly known as Kang Health, obtained its treatment history database from an HMO in Israel, which is likely a limitation for the US market.

Providence St. Joseph Health hires B. J. Moore (Microsoft) as CIO. Moore — whose background includes cloud, AI, and enterprise commerce – will report to the health system’s CFO, who also came from Microsoft. It’s an interesting choice for the country’s third-largest health system given that Moore has no advanced degree, no healthcare experience, and a deeply technical work history. It’s also odd that he’s reporting to the CFO, who also had no previous healthcare experience. I don’t know how EVP/CIO Janice Newell fits in – she’s still on the leadership page, but wasn’t mentioned in the announcement.

Netsmart will work with Kindred Healthcare to develop a clinical platform for long-term, acute care hospitals, rehab, and care management.

Senator Lamar Alexander (R-TN), who is active in federal health IT initiatives in his roles of chairman of the Senate’s HELP committee and author of the 21st Century Cures Act, will not seek reelection in 2020 after serving three terms.

Teladoc Health EVP/COO/CFO Mark Hirschhorn resigns following publicity and lawsuits over his romantic affair with a since-resigned Teladoc employee to whom he gave stock tips. The company had previously stood by its decision to discipline Hirschhorn with a one-year suspension of share vesting. TDOC shares dropped 6 percent after Monday’s announcement but regained ground Tuesday, having increased 35 percent in the past year vs. the Nasdaq’s 2.4 percent loss.

This tweet by a palliative care doctor drew interesting Twitter responses as she decried negation of “hundreds of years of our communication as healers” for not being allowed by compliance to write “history of” in the HPI (history of present illness). Some reactions:

A judge rules that the former CEO of St. Mary’s Hospital (FL) can sue CNN for libel over a report by Anderson Cooper in which the hospital’s pediatric surgery mortality rate was claimed to be running triple the national average. David Carbone, MHA says CNN compared the hospital’s 12.5 percent mortality rate for open heart surgery to a national average for all surgeries and didn’t risk-adjust the data. The hospital closed its pediatric cardiothoracic surgery program two months later amid public backlash, triggering CEO Cardone’s resignation. CNN argued that its report didn’t mention Carbone by name and that disagreeing with the method of comparing mortality rates doesn’t support a claim of intentional defamation. 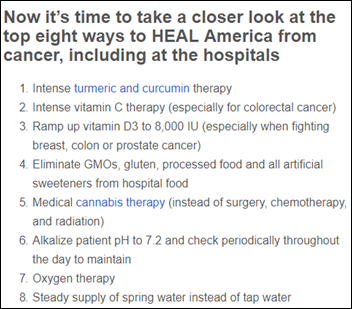 A cardiologist’s New York Times opinion piece called “Dr. Google is a Liar” says that fake medical news spread by social media and search engines (as in the above example, which features a video by the hilariously phony Dr. Leonard Coldwell) threatens our lives, making these observations:

Weird News Andy titles this story “Socks Appeal.” A man who sniffs his socks every evening after work when changing clothes develops a severe respiratory fungal infection from breathing in spores.