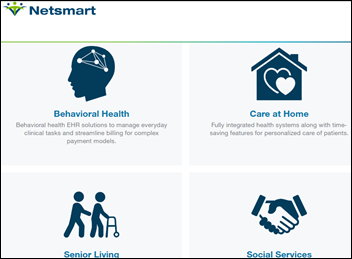 Allscripts will sell its majority share of Netsmart for $525 million, earmarking the proceeds for paying down debt, investing in specific growth areas, and repurchasing shares.

Allscripts acquired its 51 percent stake in Netsmart in March 2016 by contributing $70 million in cash and its Homecare business, partnering with private equity firm GI Partners to invest a total of $950 million in Netsmart.

The Allscripts ownership share will be purchased by its former co-investor GI Partners and private equity firm TA Associates, with the deal expected to close by the end of the year.

MDRX shares rose 4 percent Monday on the news, tempered by a Leerink analyst’s question of why Allscripts would sell out after touting Netsmart’s growth as its original reason for investing in it. The analyst also noted that Allscripts recently blamed its weak bookings on management’s distraction with the Netsmart business.

Netsmart will operate as an investor-backed independent entity. Netsmart CEO Mike Valentine says the company’s growth will accelerate as an independent company, hinting that Netsmart may pursue acquisitions as  it focuses on homecare growth.

From Tennessee Tuxedo: “Re: HIStalk. A recent Washington, DC meeting included a technical expert panel discussing whether market forces could influence EHR vendors to change their pricing structure for access to their APIs. One vendor rep said, ‘It does when it shows up on HIStalk.’ I call it being HIStalked. Keep up the great work.” Thanks. I’m happy to be turned into a verb that suggests shining a light on arguably questionable practices.

From Amatriciana: “Re: DonorsChoose. I’d like to make a donation again this year when the matching funs are the highest, I really appreciate the extra matching you got last year.” I’ve exhausted the matching money from my anonymous vendor executive, but other DonorsChoose matching opportunities abound – the last round of donations were matched 5x and even 10x by foundations. Instructions:

From Dirk Squarejaw: “Re: Dr. Jayne. She cited a story from CNN. Fake news!” I’m not sure if this is a tongue-in-cheek comment, but I’m not entirely opposed to calling CNN “fake news” (although I prefer “dumbed-down entertainment posing as news that intentionally keeps people agitated and thus coming back.”) CNN and other news outlets have found that factual and nuanced reporting of complex world events doesn’t draw the profitable eyeballs of the intellectually lazy who want sensationalistic stories (including the medical ones), news “celebrities” who blast out opinions that pander to a targeted demographic, and shallow entertainment posing as current events (The Onion satirized it brilliantly back in 2013). However, you can’t blame CNN – they provide the supply of crap that our fellow citizens demand, at least in those rare occasions in which they tire of watching funny YouTube videos, posting nearly indecipherable Facebook rants, and entertaining themselves by using filters on their selfies or selecting lame GIFs as reactions to avoid the intellectual marathon of stringing actual words together. Compare CNN’s choice of top stories to that of the far more responsible American edition of BBC News. Pathetic news reporting reflects rather than causes our increasingly unsustainable culture, which resembles an overweight, angry, and socially outcast teenager who locks themselves in their room surrounded by videogames, drugs, and junk food until something sets them off from self-indulgence to violence.

From Significant Mother: “Re: smartphones. What’s your take on Apple’s high-end models not selling well?” Beyond fanboy status, phones have become a commodity in performing equally well for making calls (a minor use case for most people), texting, running apps, or browsing the web. It’s a mature market in which vendors add questionably useful features and tweak form factors as a differentiator and incumbents are threatened by lower-cost competitors. The only battleground remaining is over the all-important camera, and while Apple has improved in that area at least in terms of pixel wars that matter little for online photo posting, Google Pixel’s Night Sight (AI-powered low-light performance) is the only newsworthy development.

From Fax Me a Simile: “Re: NHS’s fax machine ban. We should do the same here!” You are assuming (incorrectly, I suspect) that providers would be thereby forced to adopt more modern interoperability technologies even though our hospitals aren’t government-run as in the fax-axing England. Most likely they would simply go back the pre-fax standard of mailing photocopies or asking patients to hand-deliver documents. You would also be removing the only form of interoperability that is universal, that costs next to nothing, that never goes down, and that has rarely spilled PHI. Mandate other forms of interoperability (instead of just banning a particular one) if you feel the need to intervene against market forces, but note that providers aren’t paid to share patient data and are rarely punished for refusing to do so, so you’ll just screw patients in trying to force cooler but harder, more expensive technology on providers who aren’t the major beneficiary.

Here’s the recording of last week’s CitiusTech webinar, “Make the Most of Azure DevOps in Healthcare.”

Zen Healthcare IT announces its expanded HIE capability based on its work with Arizona’s Health Current HIE. 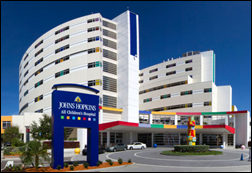 Johns Hopkins All Children’s Hospital (FL) parts ways with its president, cardiovascular chief, chief of staff, and surgery department chair following  a newspaper’s report that its Heart Institute mortality tripled between 2015 and 2017 even as employees warned management about the work of specific surgeons. At least 11 children died in the 18 months after the internal warnings. This is yet another reminder that (a) we would be hosed without investigative journalism; and (b) a hospital’s fancy buildings, brand name, and self-stroking advertising aren’t necessarily indicative that they aren’t screwed up internally in a way that may harm patients. US News & World Report must be embarrassed to have named All Children’s to its “Best Children’s Hospitals” for cardiology and heart surgery for 2018-2019 and Hopkins should be equally embarrassed for taking over All Children’s six years ago with a promise to elevate its heart surgery program as one of the country’s best and instead made it the highest-mortality hospital in Florida.

Black Book finds that non-profit health systems of greater than 1,000 beds are happy with their EHR choice even after suffering through blown budgets and lost revenue, but 88 percent of mid-sized regional systems regret their implementation due to hidden costs, unexpected consulting fees, lost revenue, patient frustration, and clinician burnout. Black Book speculates that those hospitals focused too much on choosing the right functionality and getting the implementation done efficiently while failing to address workflows, usability, and interoperability. Other findings:

A small study finds that providing hospital inpatients with tablets that are set up to access a patient portal didn’t improve patient activation, although patients did sometimes use the portal to look up information.

I missed this from a few months back. An expert says that while consumer DNA tests aren’t very useful, any company that can figure out how to make whole-genome sequencing free or cheap can become the Google of that field in providing the “sweet Texas crude” that is needed for clinical treatment and research. He notes that tests such as those offered by Ancestry.com and 23andMe lure customers into donating “an intensely personal, incredibly valuable asset” instead of being paid when their data is sold or used to create new drugs or other products. He adds,

The bigger a genomic network becomes, the more likely it is that correlations previously impossible to detect will be uncovered, and the more people and groups will sign on to mine the information for gold … Genomic marketplaces are already attracting partners interested in paying for access to your DNA sequences and related information, with your consent … But the marketplace will really thrive when 2G DNA companies eventually tap into the wellspring of dollars that today supports the Web: advertising. Genomic networks could become the richest source of detailed, opted-in data ever collected for targeted advertising. As more gene-linked products and services appear, these marketplaces should diversify beyond health and medicine, and the revenues flowing through them should explode. And you’ll get your cut. 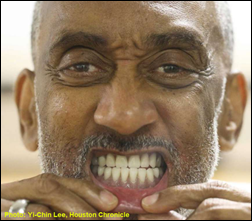 Brilliant: Texas prisons will begin 3D printing of dentures for inmates, restoring functionality at a cost of just $50 per set and addressing complaints that many US prisons are so financially strapped to provided medical care that dentures are rarely provided and only in cases of medical necessity (the inability to chew doesn’t count). The photo above is of an inmate’s 3D-printed dentures, which are remarkably lifelike. Good job, Texas. 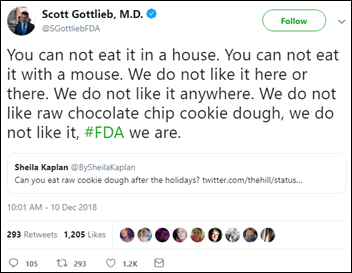 Dr. Gottlieb channels Dr. Suess in a tweet that is as amusing as it is timely. 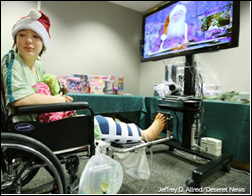 A woman dies of hypernatremia after attempting a “soy sauce colon cleanse,” an Internet fad that involves drinking a quart of soy sauce over two hours. 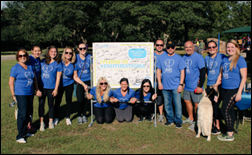