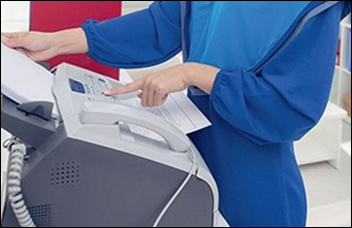 In England, Health Secretary Matt Hancock bans NHS from buying new fax machines and insists that they be phased out by March 31, 2020.

The Royal College of Surgeons agrees, estimating that NHS still has 8,000 fax machines in service.

Here we hospital people thought we were being cutting edge by moving to multifunction devices that at least bundled faxing with printing and scanning. On the other hand, if a business case exists for using something other than fax, they would already be gone.

From Digital Debonair: “Re: paging systems. A Texas hospital found that Epic-issued consult pages were not being delivered if the message size exceeded character limits – 280 characters for pagers, 160 for mobile phones. The hospital limited Epic’s ‘reason for consult’ field to 100 characters and added an alert to the intended recipient’s mobile device when the limit is exceeded. Once again, technology’s unintended consequences bring us to the least common denominator instead of fixing the problem by breaking the message into segments or getting the communications vendors to increase their character limits. It’s fascinating that each hospital has to discover and solve this problem on their own. Sigh … we have so many miles to go.” Unverified, but the hospital’s email warning to the medical staff was attached. I verified that Sprint and Verizon have 160-character limits, while ATT breaks messages into multiple 160-character segments automatically. SMS stands for “short message service,” so perhaps the real problem is that hospitals try to use that service for something for which it was not intended (not short, in other words) regardless of the convenience of doing so. There’s also the question of whether PHI should be sent over SMS instead of via an encrypted messaging app that could also provide a larger character limit.

From Wan Complexion: “Re: Most Wired. You didn’t list the winners.” I don’t see the point, even as someone who has run IT in organizations that won. We should judge health systems on outcomes, cost, and consumer focus, not on using tools that should drive those results (but usually don’t). I ate at a McDonald’s and it was still awful despite (or perhaps because of) an enviable arsenal of enterprise-wide technology. By “Most Wired” standards, I should have loved it. 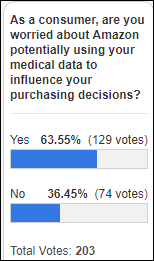 Poll respondents fear that Amazon will use the medical data they can get to influence their buying habits, although to be honest I’d trust Amazon a ton more than Google or Facebook since Amazon’s business model involves moving merchandise, not serving up ads that clearly were chosen using information those companies really shouldn’t have.

New poll to your right or here: should hospitals be prohibited from using fax machines? Vote and then click the poll’s “comments” link to explain.

I’m questioning those frantically gesticulating TV weather people who this weekend are milking camera time with what they call a “winter storm,” “winter weather,” and of course the inevitable “wintry mix.” It’s not winter until December 21, although I recognize that the less-hysterical “fall storm” won’t keep hunkered-down eyeballs glued to the TV commercials and the result isn’t any different regardless of what the calendar says.

Allscripts shares hit a 52-week low last week, having shed 34 percent in the past three months. Anonymous posters on TheLayoff.com claim that around 80 percent of the 1,700 McKesson EIS people who joined Allscripts with the acquisition 14 months ago are no longer there.

IBM sells off several software lines to an India-based company, among them Lotus Notes/Domino, which should elicit hope from IBM’ers who have been stuck on that unpopular platform while the rest of the world moved on. Maybe they’ll replace it with GroupWise.

Medication reminder technology vendor MyMeds issues a press release whose headline appears to be intentionally misleading, dutifully picked up by some crappy health IT sites as a “partnership” between the company and Mayo Clinic. Plowing through the fluff reveals the actual development – the app will offer users Mayo Clinic’s drug information (for which I assume the company is paying). Any resemblance to “teaming up” appears to be coincidental.

InterSystems releases a cloud-hosted version of its TrackCare EHR for hospitals in the UAE and Middle East, licensed in a pay-per-usage model.

Hill-Rom’s newest hospital bed will include FDA-approved sensors for monitoring heart and respiratory rates, checking vital signs 100 times per minute and alerting nurses of abnormalities. The price was not announced, but the company’s traditional bed is among the most expensive with a list price of $20,000.

These provider-reported updates are supplied by Definitive Healthcare, which offers a free trial of its powerful intelligence on hospitals, physicians, and healthcare providers. ) 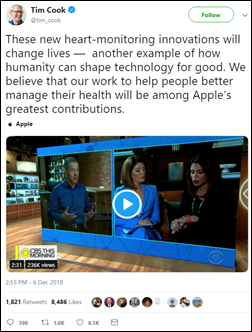 Here’s an interesting tweet from Apple CEO Tim Cook. I’m not sure the silver bullet for people managing their health lives inside of an IPhone, but I’m sure a citation-desperate academic will compare life expectancy of IOS and Android users vs. a control group of non-cell users.

An article by Penn’s Wharton School weighs in on Amazon’s announcement that it will mine unstructured patient data using AI and machine learning in its Comprehend Medical program, saying the service could:

A ProPublica report finds that journal articles written by physician researchers often don’t disclose the money they’re paid by drug and medical device companies as required, with the medical journals doing little checking of their own. Among them is the dean of Yale’s medical school, the president-elect of the American Society of Clinical Oncology, and the president of clinical operations at Sarah Cannon Research Institute. The reports didn’t have to dig all that deeply – they simply looked up compensation as reported to CMS’s Open Payments Database and compared that to the disclosures section of published articles.

Weird News Andy says this patient hacked up a lung, kinda. A patient coughs up what looks like a bright red, leafless tree, which turned out to be a six-inch-wide blood clot formed in his right bronchial tree (and now you can see how apt that name is). I’ll spare you the photo just in case you’re eating  breakfast since it’s both fascinating and disturbing.