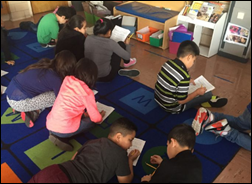 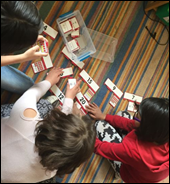 Readers funded the DonorsChoose teacher grant request of Ms. S in Colorado, who asked for a “huge box of math tools and games” (actually 17 items in total) for her elementary school class. She reports, “Thank you so much for sending us such amazing math games. I can honestly say that kids are loving math more than ever. They loved the dice game you sent us called Math Chase. One kid rolls one large dice and then proceeds to roll five other colored dice. They have to use the five other dice to make the number on the large dice. They can use addition, subtraction, multiplication, or division and it requires so much critical thinking. It has been so great to see kids apply the skills we have been learning. Now they can’t wait for math class because they know it will be fun!”

Wired magazine notes that Stanford has enrolled a huge umber of study patients whose heartbeat will be monitored from their Apple Watch, but questions whether screening huge numbers of people who don’t have symptoms will result in better care instead of misdiagnosis, unnecessary testing, and overtreatment. It also notes that Apple will release EKG and irregular rhythm features to the general public before the study is finished.

Brigham Health uses text-based patient engagement for colonoscopy patients, reminding those who are scheduled for the procedure to complete their prep correctly. The no-show rate has dropped from six percent to four percent, while the number of poorly prepped patients has decreased from 11.5 percent to 3.8 percent.

Female medical students taking Canada’s licensing exam complain about #tampongate, their term for the test’s requirement that feminine hygiene products be declared and inspected upon entry.

CNN notes the irony that while the man charged with killing 11 people at a Pittsburgh synagogue was screaming “I want to kill all the Jews” in the ambulance and ED, the nurse treating him and the hospital president who stopped by to check on him were both Jewish. Allegheny General Hospital President Jeffrey Cohen, MD — who is a member of the Tree of Life synagogue where the shooting occurred — said, “We don’t ask questions about who they are. We don’t ask questions about their insurance status or whether they can pay. To us, they’re patients.” He added a comment about the alleged shooter: “The gentleman didn’t appear to be a member of the Mensa society. He listens to the noise, he hears the noise, the noise was telling him his people were being slaughtered. He thought it was time to rise up and do something. He’s completely confused.”