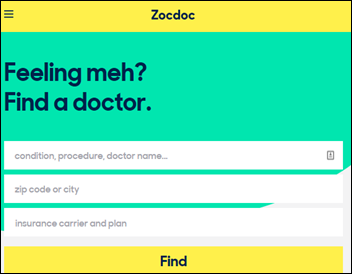 Doctor appointment booking service Zocdoc postpones its announced pricing changes after practices complain about being charged for each booked appointment instead of paying just an annual fee.

A dermatologist says his $3,600 per-doctor annual cost would jump 700 percent and might run afoul of Stark restrictions since the practice would then be paying a per-referral charge.

Zocdoc is valued at $2 billion in having raised $145 million in four funding rounds, with investors that include Amazon’s Jeff Bezos and Salesforce’s Marc Benioff (although the proposed pricing is sort of anti-Amazon Prime in focusing on per-item charges instead of a blanket fee).

The company claims that reducing the annual fee and adding a per-appointment fee of $35 to $100 (depending on specialty) will lower the provider cost of entry and leave most of its practices paying the same or less. 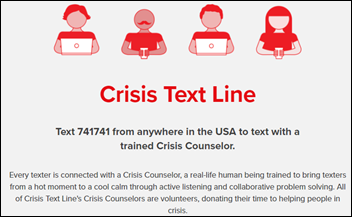 From Generic Competitor: “Re: Crisis Text Line. Heard about it on TED Talks and thought you would be interested.” The non-profit Crisis Text Line offers free, 24×7, text message support from trained volunteers to “help move from a hot moment to a cool moment.” The organization supports its mission via for-profit, software-powered subsidiary Loris.ai, which teaches companies how to communicate with empathy and cultural competency using insights derived from applying data analysis to Crisis Text Line’s dozens of millions of text-based interactions.

From Monetary Exigency: “Re: medical bankruptcy. If we want to live in any sort of insurance system (and they do work in other countries) then there has to be a real imperative to have insurance. Just like car insurance. You have a lot to lose if you don’t have it. My suggestion, though, would be to allow people to be sued into medical bankruptcy, but only at the then-current Medicaid rate for those exact services. Uninsured patients are being charged against a fee schedule that no reasonable payer would ever pay against. Health systems chase the patients down to bankruptcy and still post beautiful ‘charity care’ numbers on their mission page on their website.” I like that idea, although I’m still a fan of forcing providers to charge everybody the same price to eliminate the secret contracts, cost shifting, and the absurd situation where the cash-paying customer pays more than anyone else.

Listening: new from the 43-year-old, Canada-born R&B singer-songwriter Tamia. I was only vaguely aware of her and thus learned two interesting factoids: (a) she’s married to former NBA player and Atlanta Hawks co-owner Grant Hill; and (b) she has well-controlled multiple sclerosis. Requiring insulin for this somewhat sugary mix, I injected myself with new music from Sweden-based melodic metalcore band Amaranthe, which to my ear sounds like Adderall-fueled Abba jamming with Nightwish. 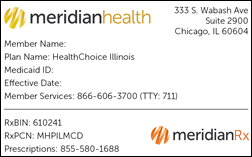 Epic-focused consulting firm Bluetree Network moves to a 15,000-square-foot office in Madison, WI as it expands headcount to an eventual 450 and annual revenue to $55 million. The company will also add a managed services center to help front-line provider employees. 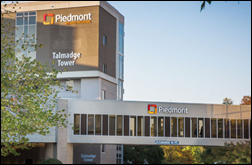 A CommonWell blog post says it’s on track to release connectivity to Carequality by the end of summer following its testing with customers of Cerner and Greenway Health in which 4,000 documents have been exchanged. 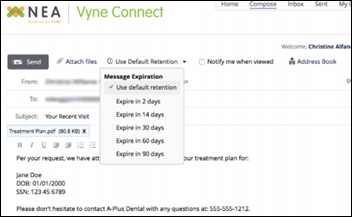 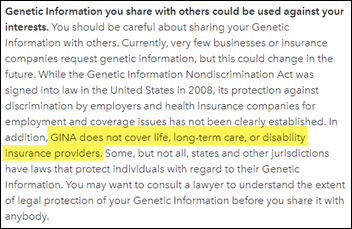 Interesting: consumers who get a genetic test from companies like Ancestry and 23andMe must disclose that fact when applying for long-term care insurance, and companies can then use the information to decide whether to issue a policy and how much to charge for it. The federal Genetic Information Nondiscrimination Act applies only to health insurers, not those who sell policies for long-term care, life, or disability.

Singapore is studying the use of virtual browsers after hackers penetrated SingHealth and compromised the information of 1.5 million patients. A virtual browser, offered by Citrix and other companies, runs remotely, is isolated from the local computer and network, stores no information on the user device, and clears itself when the session is terminated.

Fast Company profiles Savvy, a patient-owned data cooperative which invites patients to contribute their medical information, which is then made available to providers who are interested in performing research surveys, testing, or focus groups. Patients pay $34 to join, then share in the company’s profit from fees charged to practitioners 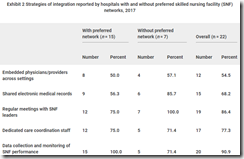 The US Preventive Services Task Force finds insufficient evidence to assess the usefulness of screening symptom-free adults over 65 for atrial fibrillation to get them started on stroke-preventing anticoagulant therapy, possibly throwing shade on the remotely monitored app and patch vendors that portray such mass screening as a great medical advance compared to traditional methods.

In Japan, Tokyo Medical University apologizes for modifying its medical school application software to subtract points from the test scores of women, a change it made in 2006 in response to having too many qualified female applicants, which raised its concern that they would leave the workforce and cause a doctor shortage. 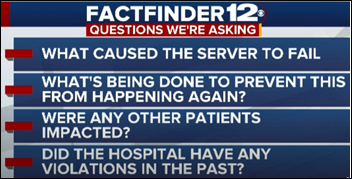 A woman whose 18-year-old diabetic daughter was turned away from the hospital ED because “our server’s down – IT’s working on it” complains to the local TV station and the board and attorney of South Central Kansas Medical Center (KS) about her resulting three-day ICU stay at another hospital. The daughter says, “I work at the local donut shop, and when we have computers go down, we write everything down and we put it in the computer later. We always have a backup plan for something. The fact that the hospital didn’t have a backup plan is kind of frustrating.”