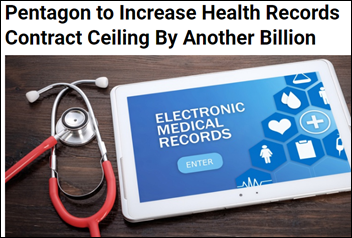 The Department of Defense will increase its EHR contract ceiling by $1.1 billion in expanding MHS Genesis to cover implementation of Cerner by the Coast Guard. The extra cost will also cover items included in the VA’s contract that were not present in the DoD’s agreement, according to Defense Healthcare Management Systems Program Executive Officer Stacy Cummings.

The DoD’s original contract ceiling with lead contractor Leidos was valued at $4.3 billion and a total of $9 billion if all options were exercised. 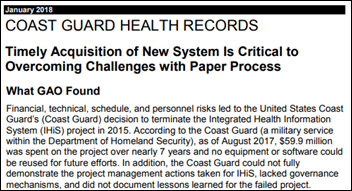 The Coast Guard gave up on its attempt to implement Epic in 2015 after running $46 million over budget with no sites live. A GAO investigation blamed poor project management, insufficient governance, inadequate project documentation, lack of testing, and internal staff turnover. The Coast Guard began searching for an alternative to Epic in February 2016, reverting to paper and, according to the GAO, endangering members with convoluted processes.

Cummings said the Pentagon will publish a second evaluation report by the end of the year, following a scathing internal review from May that concluded that MHS Genesis “is neither operationally effective or operationally suitable” and not capable of managing care delivery.

The DoD also announced that the next four MHS Genesis rollout locations will be Naval Air Station Lemoore, Travis Air Force Base, US Army Health Clinic Presidio of Monterey, and Mountain Home Air Force Base.

From FlyOnTheWall: “Re: Allscripts. The company’s investor page proudly boasts in a press release from last year that Rothman Ortho selected Allscripts PM to replace its ‘legacy system.’ Was not that system Allscripts Vision? Nice to see Allscripts getting into the rip-and-replace frenzy of Allscripts solutions, even though they did an RnR of one of their own products.” Unverified, but I believe Rothman was using the old Vision product of Medic / Misys, acquired by Allscripts in 2008. If that’s indeed the case, then I would categorize the announcement as misleading since it’s just swapping one Allscripts product for another, not a brag-worthy displacement of a competitor’s system. 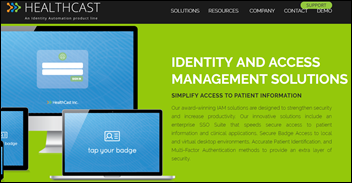 Former employees of the shuttered CareSync describe the company’s final days to the Hardee County (FL) Board of County Commissioners, saying they were pressured to keep patients of its chronic care management business on the telephone line for at least 20 minutes to qualify them for their monthly Medicare billing. CareSync co-founder and State Rep. Jamie Grant — who served as senior solutions architect and was cleared of ethics violations after charges that he funded the company’s startup by misusing Hardee County development grants – says he hasn’t ruled out suing unnamed parties. Co-founder Travis Bond, who employees said was removed by the board because of poor financial management, says he does not plan to pursue litigation.

Cerner has added half of the 600 Kansas City-based employees it needs for an expansion of its RevWorks and ITWorks outsourcing businesses.

DirectTrust hires Scott Stuewe (DataFile Technologies) as president and CEO. He worked for Cerner for 20 years through December 2016. 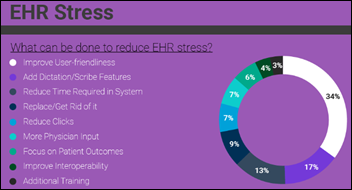 A Reaction Data survey of 250 physicians finds that EHRs, regulatory compliance, and internal bureaucracy contribute most to their burnout, with patients named as the problem only 2 percent of the time. The top wished-for EHR improvements are improved user friendliness, additional dictation or scribe capabilities, and reduced time required.

A Black Book survey finds that two-thirds of hospitals are reconsidering whether the ED information system supplied by their EHR vendor can handle efficient ED workflows and meet consumer expectations, with outsourced ED doctors being the least satisfied due to EHR training gaps, excessive clicking, and difficulty in obtaining outside patient data. ED doctors who were forced to move from a best-of-breed EDIS to an EHR’s ED module say their new system hurts their productivity (90 percent), impedes patient workflows (75 percent), and contributes to medical staff burnout (90 percent). CIOs are mostly at odds with those beliefs, favoring a single source EHR solution. The top-rated best-of-breed EDIS vendor is T-System, followed by Optum Picis and Wellsoft. Cerner, Meditech, and Allscripts were also highly rated by users. The most-desired features of both types of EDIS in order are better mobile deployment, interoperability, and patient satisfaction tools.

The Senate confirms Robert Wilkie as VA secretary in a 86-9 vote. 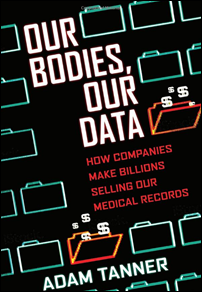 A Kaiser Health News report recommends that consumers pay cash for alcohol and cigarettes while bragging about gym memberships on social media since insurers and other groups are using personal information from credit cards and other sources to create individual profiles that are then sold to companies. Buyers include drug manufacturers – which might want to buy a list of men over 50 who are experiencing erectile dysfunction – and insurers that may use the profile to predict lifespan or medication adherence. Even employers can use the information to check for a job candidate’s potential work-affecting and expensive chronic illnesses before hiring them. The article quotes Harvard fellow Adam Tanner, who wrote “Our Bodies, Our Date: How Companies Make Billions Selling Our Medical Records.” 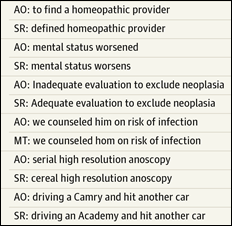 A small JAMA-published study finds that back-end speech recognition (specifically Nuance’s former EScription product) has a 7 percent error rate when creating dictated notes (operative notes, office notes, and discharge summaries), with some of those errors such as “grown mass” instead of “groin mass” remaining on the chart for weeks or sometimes indefinitely as clinicians either don’t review them promptly or sign them without double checking. The authors recommend that speech recognition errors be submitted for calculating error rates and for creating automated error detection systems.

Banner Health posts a job for CEO of its Tucson campuses just after its corporate VP/CIO announced plans to leave and the local paper published documents from a state investigation into problems with patient care, provider satisfaction, and billing from its Epic-to-Cerner conversion at the former University of Arizona Health Network hospitals in Tucson.

Google’s Nest home automation division is approaching eldercare facilities to use its products for monitoring the wellbeing of residents. 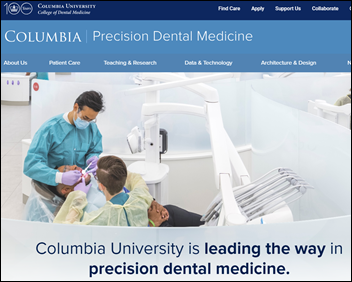 Columbia University’s new Center for Precision Dental Medicine offers RFID tracking of patients and equipment, biofeedback-measured stress levels for quantifying pain, video recording of procedures, and all-digital dental chairs whose six instruments are RFID-enabled for tracking usage and sterilization. They hope to use the resulting data not only to make patients more comfortable, but to analyze provider technique to identify best practices. They also hope to to integrate their systems with EHRs to remove the silos between professions.