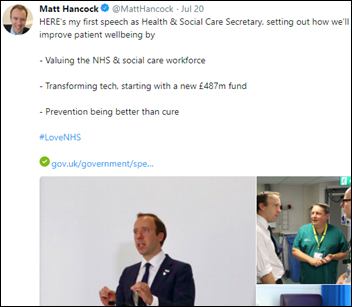 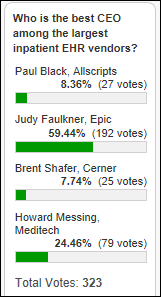 Poll respondents say Epic has the best CEO. HISJunkie says Meditech hasn’t grown, Brent Shafer is too new to judge, and Allscripts is a mess. Tripp Tart voted for Judy Faulkner in admiring her for keeping the company free of shareholder influence. Former Community CIO votes for Howard Messing since he also kept Wall Street out of the picture and is creating company growth again, while Epic’s growth is mostly due to its hospital customers acquiring more facilities.

New poll to your right or here: would you be OK with insurance companies using your harvested social, financial, and lifestyle data to approve and price your medical coverage?

Publicly traded rural hospital operator LifePoint Health is considering selling itself to a private equity firm for up to $6 billion, with the report sending LifePoint’s shares up 40 percent. LifePoint Health also operates 15 hospitals in partnership with Duke University Health System under the Duke LifePoint Healthcare brand.

LabCorp is close to fully restoring its systems after they went offline in a July 13 ransomware attack. The company’s security team detected the Remote Desktop Protocol attack and stopped it within 50 minutes, but by then, the SamSam ransomware had impacted 7,000 Windows-based systems and 1,900 servers. SamSam took Allscripts down earlier this year, reportedly also using RDP as its vector. 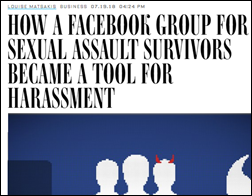 Members of a private Facebook group for sexual assault survivors find themselves trolled by new users who threaten to post the intimate details they had shared under their real names. The group was apparently created by an anonymous administrator who either had duped the members or whose account was hacked. The report by “Wired” notes a Facebook flaw that allowed this to happen – groups can be created by “pages” that aren’t tied to an individual’s profile, the same way Russian propagandists used the platform before the 2016 elections to keep themselves anonymous. I was going to play around with some Facebook group stuff but decided instead to try Microsoft Teams now that the company is offering a free tier and no longer requires members to use Office 365. 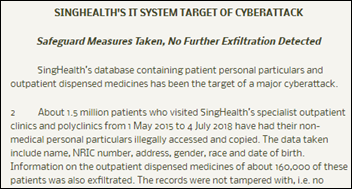 Singapore says hackers stole the information of one-fourth of its population, 1.5 million people, in an attack involving its SingHealth clinics. The hackers specifically targeted the information of the prime minister in the cyberattack that lasted from June 27, 2018 until it was discovered on July 4. They breached a specific PC and then elevated its account privileges to access the database. 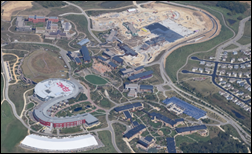 Epic’s campus is free of cranes for the first time in two decades as the company’s frenetic construction projects wind down, having expanded the campus to handle employee headcount that tripled to 10,000. Epic says that it may another set of buildings next year. 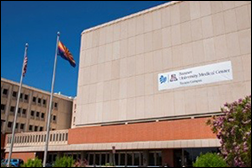 AP Stylebook neatly summarizes how publications should use the results of political polls, offering rules that also apply to healthcare IT:

An interesting study finds that telling students to “find your passion” for a career is bad advice since most passions are grown from experience, not discovered. The danger of the “do what you love” argument is that it encourages people to give up too easily and move on to something else if they don’t receive immediate gratification. 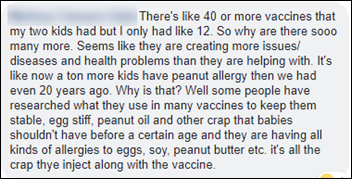 This is where science and public health meet the reality of people who don’t value them or who think they are driven by conspiracies. The parents of 57,000 Texas public school students decline to have them vaccinated in the 2017-2018 school year for non-medical reasons. In a significant jump, some counties saw a 9 percent opt-out rate and nearly half of the parents of students at one Austin private school opted out of giving them vaccinations under the repeatedly scientifically disproven belief that vaccines cause autism and other diseases, with “vaccine choice” being viewed by some as resistance against overly intrusive government. Supporters of Texans for Vaccine Choice are mobilizing political activities, protesting with signs that say “The State Does Not Own My Children” and promoting “informed consent” in publishing anecdotal stories in which parents claim that the medical problems of their children were caused by vaccinations. Obviously their choice affects everyone as vaccines work for entire populations only when enough people receive them to create “herd immunity.”

A CNBC report notes that a roadblock to digital health company success is that apps always end up recommending that users see their doctors, which people don’t like doing and often can’t afford. That leaves apps as “a funnel or a stopgap rather than a revolution.” A cardiology fellow and digital health founder says, “All the things done well by digital health — they’re simple, fun, visual, with great user experience — are still missing from most clinical visits, so it remains pretty unpleasant to be a patient. To me, this gap gets closed by bringing the clinical experience up to the same standards as our digital health solutions.” That is pretty brilliant insight – imagine frictionlessly summoning a ride on Uber and then having a 2004 Pontiac Aztek show up an hour late with the meter already at $40 and the lost driver refusing to use the GPS.

Google, Facebook, Microsoft, and Twitter launch an open source Data Transfer Project that allows people to transfer their data from one online service to another (the technical overview is here). Healthcare wasn’t mentioned specifically, but it would be pretty cool if EHR vendors provided a similar capability in allowing patients who are seeing a new doctor to initiate their own transfer of data to the new doctor’s EHR, although questions would then arise about the lack of synchronization capability afterward.