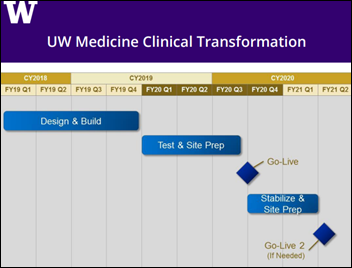 A reader-forwarded committee meeting agenda from University of Washington Medicine dated July 12 indicates that the health system will move to a single EHR in a 30-month, $180 million project.

The health system is using Cerner inpatient at University of Washington Medical Center and Harborview Medical Center, Cerner Soarian at Northwest Hospital, and Epic for ambulatory.

The document doesn’t say which system UW Medicine has chosen, but all of the peer group hospitals mentioned in another document I found online use Epic.

From Ricardo Researcher: “Re: my journal article. I was hoping you might mention this one on HIStalk.” I’m increasingly frustrated by articles that exist only behind a paywall, which of course is the ridiculous default for peer-reviewed journals that make a fortune by selling access to articles they didn’t themselves write, describing important research work that they didn’t themselves perform, and funded in many cases by taxpayers who aren’t allowed to look at it. It does no good to proudly tweet out links when non-subscribers don’t have access. I usually won’t mention those articles unless the author emails me a copy since I don’t trust someone else’s summary, especially if they don’t have relevant medical or technical background. 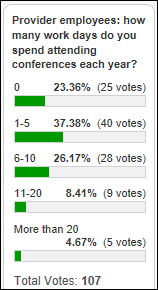 New poll to your right or here, repeating one I did two years ago to see what’s changed since: have you participated in a virtual visit in the past year? Click the poll’s “comments” link after voting to explain why or why not.

Every year I offer a “Summer Doldrums” deal on newly signed sponsorships and webinars to overcome the seasonally-induced vendor siesta that makes me question whether I have slipped into irrelevance. Contact Lorre. Extra points for naming the summer movie depicted above.

The week of July 4 is traditionally one of the slowest for real news and having the holiday fall on a Wednesday encouraged a week-long work slowdown. You will likely not resent the idea of having less to read knowing that while I wrote less, I still covered everything important.

A Politico article notes that never-ending government healthcare changes and resulting uncertainty, especially those driven by the Affordable Care Act, have been a boon for consultants, observing that, “American healthcare has no shortage of saviors. Some have brilliant insights that save lives and trim costs; others mainly generate invoices … Half of Twitter seems to consist of consultants. (The other half is developing health apps, which themselves spawn niche consultants.) They offer marketing, communication and wellness strategies; practice transformation; team-based-care building, revenue maximizing, behavioral health integration, pharmaceutical price-calibrating, and YouTube channels.”

The White House suspends the Affordable Care Act’s risk adjustment payments, which without further action will drive more insurers from the market and increase premiums. The payments to insurance companies, worth billions of dollars per year, discourage them from cherry-picking the healthiest and thus lowest-risk people as customers. CMS cites a recent New Mexico ruling in which a court found that the payment methodology is flawed in favor of large insurers, with the founder of a small, non-profit New Mexico insurer saying the decision will increase competition and reduce prices despite the commonly held perception that it’s just one more way for the Trump administration to sabotage the ACA. 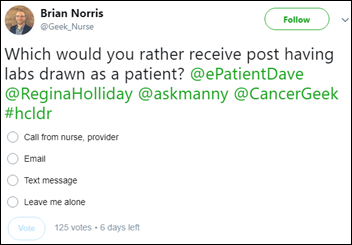 Informatics nurse and analytics guy Brian Norris is looking for responses to this poll. My choice would probably be email since (a) I don’t like getting voice calls, and (b) text messages are harder to manage, although I would also worry that the email would end up in my spam folder as is often the case these days. 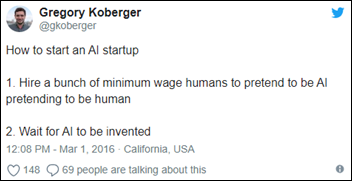 Companies trying to attract investors by claiming their systems use artificial intelligence sometimes instead are sometimes using a “pseudo-AI, fake it until you make it” approach where humans are actually doing the work behind the scenes, or as an expert calls it, “prototyping the AI with human beings.” Examples:

In Australia, a hospital’s handwashing compliance rate drops from 94 percent to 30 percent after it replaces human auditors with an expensive, sink-installed automated surveillance system.

The parents of two unrelated 11-year-old Florida boys struggle to straighten out an insurance company identity mix-up, caused by the boys having the same full name, date of birth, and birth county. Their Social Security numbers are also one digit apart. The insurance company paid claims without questioning why an unrelated child would be covered on a family insurance plan. The parents worry about which child’s medical record would be displayed in an emergency, but are at least happy that both families are reasonable since “we have the most sensitive information about each other’s children.”