Amazon is leaping into the world of healthcare with its acquisition of PillPack online pharmacy. This should have retailers and drug suppliers looking closely at their business models. Investors are already questioning the impact, with Walgreens and CVS shares each dropping 8 percent.

Amazon is paying $1B for the Boston-based company, expected to close in the second half of the calendar year. Retail prescriptions are a $300B business in the US, with CVS and Walgreens having large pieces of the pie. PillPack is licensed to deliver mail-order pharmacy services in all 50 states and also has connections to pharmacy benefit managers such as Express Scripts and CVS. It provides pre-packaged drugs to patients and automates tasks involved in the prescription refill process.

I put my physician hat on to think about its potential impact to the industry, and one concern is patient safety. With the different packaging, patients on complex medical regimens may need to change how they handle their meds and will want to watch carefully if they are transferring pills to home tracking boxes. Physicians will need to be aware of this new supplier and whether specific orders are needed for medications, for example the often-added instruction to put meds in an easy-open container or to label in a foreign language. Still, competition is generally good in most industries, so we’ll see where this goes.

I work with a number of clients that need help in translating their vendors’ communications about clinical quality measures into instructions that their internal teams can follow. The content and readability from different vendors varies, and there are definitely some superstars out there who hand-hold their clients through the entire process. There are also companies that provide vague instructions and don’t even include workflows, leaving clients to guess at where the need to document certain data elements.

There’s always some uncertainty with CQMs early in the calendar year, as vendors are responding to federal and other requirements that may be issued or modified in October, November, or December with the expectation that they be fully built and available in EHRs and quality management tools on January 1. That’s a tall order to fill for many vendors, and clients are typically twitchy, so I’m going to offer some free consulting advice. If your vendor hasn’t shipped the measures yet and you can’t run reports, you can still launch quality improvement projects to your organization. Create awareness, deliver training, and make sure your users understand and incorporate any workflow changes. Then, you’re already down the change management pathway, and when reports become available, you’re ready to go for continuous improvement. I see a lot of clients that try to use the lag between January 1 and the vendor’s delivery of reports as an excuse for not doing their part. 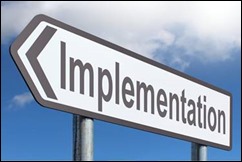 I write a lot about the physician space and what providers are thinking, but I had a chance to meet up with one of my friends who is on a major vendor’s implementation team. He always has good stories and our catch-up over cocktails did not disappoint. Early in my informatics career, I had to serve as a part-time implementation person because our hospital didn’t see the need to pay for a full-time clinician to do clinical informatics. I deployed small practices, doing everything from project management to re-routing cables under desks so we could streamline the check-in area. I was yelled at by physicians for no reason (other than they were angry about even having to think about touching a computer) and made friends with office managers who hoped that I could be a “physician whisperer” and get difficult providers in line. It gave me a new respect for the team that does implementations full time and the challenges they face.

My friend just worked with a practice that was recently acquired by a hospital system. Apparently his managing partners were much more keen on the alliance than he was, so he spent the first hour of their training time railing on the decision to join the hospital and his need for autonomy and to be able to do things the way he thinks is best for his practice and his patients. The hospital is enabling physician autonomy by providing then the option to simply dictate notes using voice recognition technology or to use scribes, as an alternative to template-driven documentation.

However, when the first patient of the day came in with a chief complaint of “my mother-in-law says I have dark circles under my eyes,” he demanded to know which template he should use in the system to complete the note, refusing to dictate the note on this uncommon reason for a physician visit, and stating that if he was going to have to use the system, it better be able to support him. I don’t know what to tell people about that situation other than to chalk it up to an end user who is reactive and illogical due to the stresses he is under. All we can do with people like that is to try to support them, try to show them different ways to document, and to hope they understand that the EHR is not going away.

He also shared the story of an “emergency go-live” that he was summoned to recently. Apparently a large provider network was adding an incremental physician in a new office and forgot to arrange for provider training and go-live support (the staff was being moved from other locations and already had knowledge of the system.) I sympathized with his road warrior tales as he tried to book a ticket with a few days notice and the client was refusing to approve it due to the high cost, leading to an impasse with the client and a delay in the go-live to when the ticket was more affordable. Clearly having a contracted physician idle in the office was a better ROI than buying the ticket.

He also does a fair amount of support for his company’s sales team and had a good story about a lead for a 200-doctor group that came in three days prior to the end of the quarter, but which his sales team actually thought they could close before the deadline. Of course it’s possible if the practice doesn’t want to ensure stakeholder buy-in or doesn’t want to fully understand what they’re getting into. At this point in the healthcare IT game, neither would surprise me.