DoD doctors and software technicians tell Politico that the Cerner rollout at four pilot sites is plagued with system bugs, inadequately trained users, and login times of up to 10 minutes. Problems reported by those interviewed and in a previous internal DoD assessment of the pilot project include:

DoD officials acknowledged the problems in a hastily arranged conference call, but say the rollout will continue as scheduled. As it should – the laundry list Politico ran is from just a handful of users and , other than the last two items, you could copy and paste it into any EHR implementation project that’s just a few months in.

Singapore decides to use two EHR vendors instead of make a single-vendor selection, initially causing Allscripts shares to drop to the point that the company files an SEC 8-K form indicating that while it didn’t get the single-vendor bid, at least its existing Sunrise business in Singapore isn’t at risk.

From Not So Scientific: “Re: KLAS. I just pulled ten of our last deals and seven of them stated that they looked at KLAS as part of their decision-making process. They are no Consumer Reports — wish there was a different option.” I suppose there’s a second question – did they look at KLAS reports just to validate their choice, or did it actually change their minds?

From Jemima: “Re: women. Al the acutely ill ‘patients’ in the Masimo beds are women, heavily made up. I guess men don’t end up in the hospital?” I wanted to interview one of those ladies to see what it’s like lying in a bed all day, trying to look sick with people staring at you. The job description must include “strong bladder.”

From Emily Peters: “Re: women. My worst encounter was when a HIMSS attendee asked if we had ‘any executives at the booth, or just women?” a few years ago. ARG. A younger colleague of mine posted photos of putting on a fake diamond ring to ward off creeps this year. Some things never change at HIMSS, it seems.” Next conference I’m arming an attractive female attendee with a hidden audio recorder to capture inappropriate comments for memorializing on HIStalk. I’m actually not joking about that. I don’t think we males understand what it’s like to receive unwanted attention or to be demeaned individually or collectively, intentionally or otherwise.

From Come Again?: “Re: women. Cerner CFO Marc Naughton during the HIMSS investor briefing, and on International Women’s Day, no less: ‘Instead of teacup rides and ‘It’s A Small World’ soundtrack at Disney, Vegas has crack and hookers. So basically the same. Speaking of hookers, I heard this morning that this year at HIMSS represents the first time ever that investment bankers have outnumbered prostitutes in the city, and that’s pretty amazing. Actually, I should probably apologize for comparing bankers to prostitutes. After all, that’s really unfair to the prostitutes.” Unverified. Although to be fair, some prostitutes are male, so to assume otherwise from his comments is in itself ironically sexist. 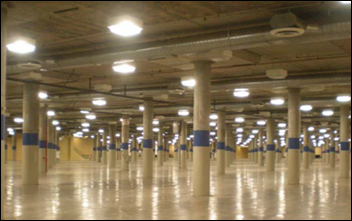 The past several days have led me to detest the Sands Expo, which opened nearly 30 years ago (eons in Las Vegas implosion years) as an overflow space for the Las Vegas Convention Center. It feels outdated and I suspect it was not designed to hold a mega-booth exhibit the size of HIMSS, although it hosts larger conventions. The odd layout (especially the upstairs / downstairs) means full-paying exhibitors get fewer visitors than they should, it’s almost impossible to orient yourself to even leave the hall, and the too-few concession offerings are pathetically poor. I also found the restrooms inside the hall to be small and primitive and I’m not a fan of the congested hallways outside the hall and throughout the complex. About the only positive is the attached hotels that replaced the old Sands Hotel in 1999. Orlando is light years better and so were the convention centers in HIMSS-abandoned cities like New Orleans and Chicago. Las Vegas has always been my least-favorite city in the world and the convention center holds a similar spot in my heart.

Despite the choice of venue, kudos to HIMSS for developing and running a hugely complicated conference while making it look easy. I realized as I wrote my convention center critique that I have nothing bad to say about the event itself. I can’t even imagine the work required years before the first attendee shows up.

The announced registration through Thursday (since the HIMSS link for Friday’s numbers doesn’t work) was 43,857, up 4 percent from HIMSS17 but about the same as HIMSS15. 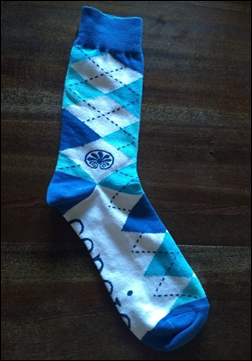 My favorite giveaway this week: cool socks. Thanks, Geneia. I may steal the idea for next year.

Lorre is still offering her “Cellar Dweller Special” for our Hall G neighbors who want to sign up as a new sponsor. A year online is better than three days in the basement. 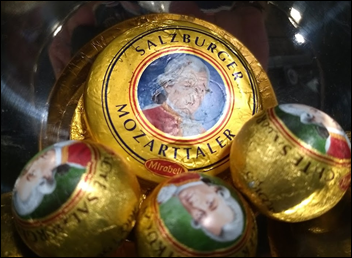 It was cool to see software groups from Bavaria, Austria, and Israel down in Hall G. These candies were so pretty that I didn’t take one – it would have felt like defiling and art display. 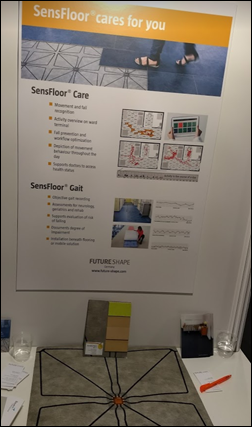 Germany-based Future-Shape makes a capacitance-powered sub-flooring that turns any room into a touchscreen-like tracking system that can detect falls, issue warnings for unusual movement (like someone who’s been in a hospital bathroom for a long time), and track movement for workflow redesign. 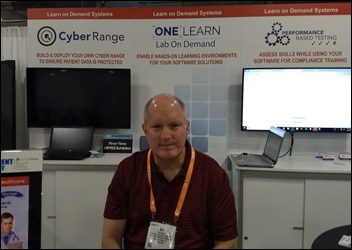 Learn on Demand Systems helps vendors set up large-scale training and testing environments for their software, with options for cloud-based demonstrations and labs that can be used anywhere (proof is their 24-hour training activity hotspot video). They also offer cybersecurity training. 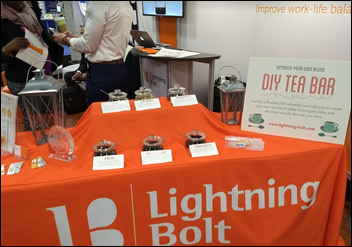 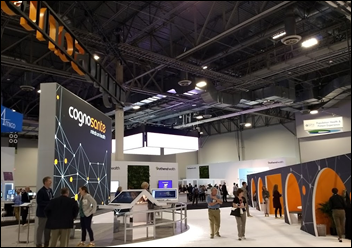 I like this booth design – the layout and lighting were well done. 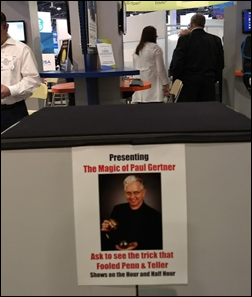 This magician does an amazing vanishing act. 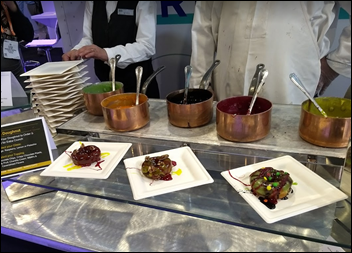 I was shocked that vendors were still offering refreshments on Thursday, the last (and shortened) exhibit hall day. The best item of the whole week was the doughnut bar of InterSystems, where you choose a doughnut type, pick which warm sauces you want, pick a fruit glaze if you want, and then decide what toppings would best round it out. My personal doughnut chef recommended a chocolate cake doughnut with warm dark chocolate sauce, large candied pecans, hunks of real bacon, and whipped cream, when he then garnished nicely. It was as fabulous as it looks. 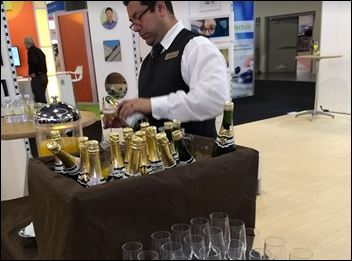 What goes great with a doughnut? A mimosa. 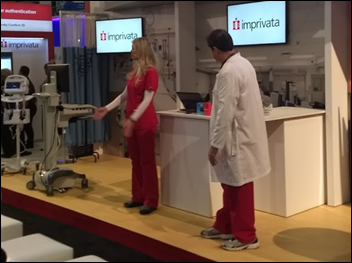 What is it about these people that screams, “I’m not really a clinician?” 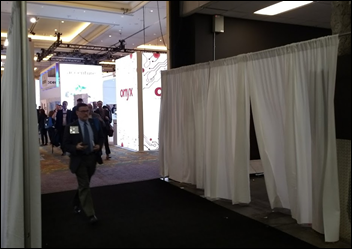 Walking through this ugly passageway between the halls is like car washes that finish up with a hurricane-like blast of drying air, except this particular blast was icy cold. 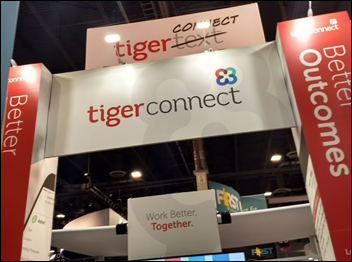 TigerText has renamed itself to make sure people understand that they move all kinds of data around, not just text.

Dell EMC’s booth was so large that they offered audio tours like you see at museums. I sat through their theater presentation, which was spectacularly uninteresting. 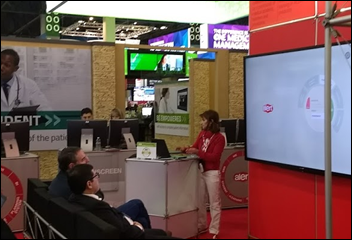 Alert Medical was global before it was HIMSS-cool, showing up every year in their red-and-white suits even though I don’t think they’ve ever sold a US customer and maybe aren’t even trying. This demo was being done in another language. 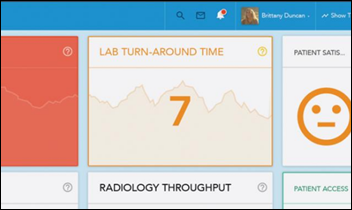 I got a demo of ClearSense, which offers a “Mission Control for Healthcare” dashboard that has a lot of smarts and good UI in presenting an intelligent view of just about every type of data you can throw at it. A user from Meharry Medical College said they’re doing cool things with it, with their next step being to create a data science institute.

That’s the HIMSS18 wrap-up unless I think of something else. It’s back to the usual Monday Morning Update next week. Let me know what you thought of the conference and any life-altering takeaways it provided. It’s back to Orlando February 10-15, 2019.