No matter how comfy of shoes I pack, my feet are always tired by my last day at HIMSS and I find myself questioning why I come every year. I was able to go to some good sessions, earn some hard-to-find continuing education credit for the Clinical Informatics board certification, and learn about some up and coming vendors and potentially disruptive products that I’d like to see succeed. Today was a good reminder though that healthcare IT is full of people who really care, people who have passion, and people who are trying to have some fun along the way.

I started my day cruising some booths with Dr. Lyle Berkowitz, getting his thoughts about various technologies and where he sees things going in the next few years. Some of us work in relative isolation and it’s good to know that what we perceive as trends are being seen by others, and that we’re sharing the same struggles. We ran into some folks he knew at WiserCare, which is working to engage patients around various clinical issues including end-of-life conversations. They deliver education to make those critical conversations more productive or to encourage their occurrence when they’re not happening. Having families engage in these discussions is something I’m passionate about, so I’m always excited to see someone working to improve the process. 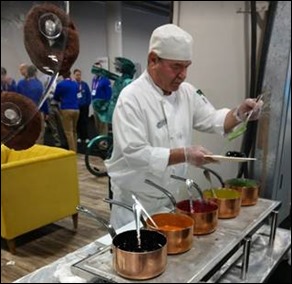 From there, we made our way to the Newwave Telecom & Technologies booth which delighted us in several ways. First, there was the donut bar, where you could select a dip or drizzle for your donut, followed by toppings including whipped cream, chocolate chips, M&Ms, pecans, bacon, and more.

I thought I heard Lyle yell “Bingo,” but it was only in my head, when we saw their buzzword wall. 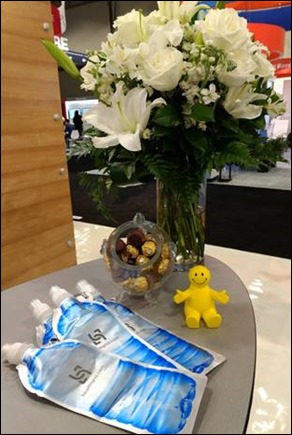 He had a busy schedule, so we headed our separate ways. I talked to some folks at HealthGrid about their mobile patient engagement platform. They’re doing some work to help organizations that might have multiple patient portals as they work to give their patients a more seamless experience. Their booth was clean and well-organized and I liked their floral display. 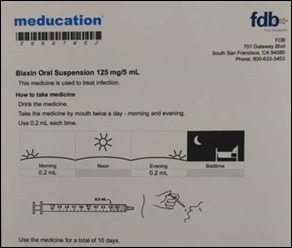 I spent a little time with First Databank learning about what they’re doing with device management and solutions to make clinical alerts more relevant. I was most taken by their Meducation offering, which gives patients instructions on taking their medications in a clear and easy-to-understand way. It’s available in 24 languages and anyone who has had to explain how to measure medication in a syringe should appreciate the clear, dose-specific pictures that show up on the print-out.

I ran into several engaging booth staffers today. On the main floor, Dave at the RFIDeas booth caught my eye with his cowboy hat and spent some time showing me solutions from their partner SerialIO. They offer a variety of RFID, NFC, and barcode scanners and sensors at good price points. On the lower floor, Mark at the Epson booth showed me some scanners I was interested in for our ever-expanding practice. We really only scan insurance cards and IDs anymore, and they’ve got some small footprint options that I didn’t know about. 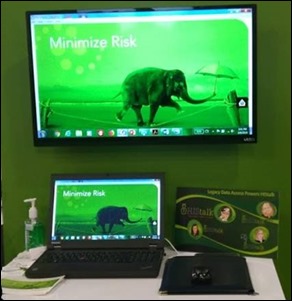 Crowds were significantly thinner today and I was able to hit the Venetian food court at 12:15 and actually find a seat. I visited several sponsors. Legacy Data Access had a nice green theme to match our signs. Patient Keeper and Agfa also had their signs prominently displayed. 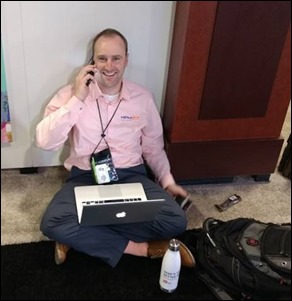 Many vendors come to HIMSS but don’t have booths. I ran into this guy in his mobile office behind the Epic booth. He offered me a spot on his cushy carpet while I checked email and we had a Judy Faulkner sighting. 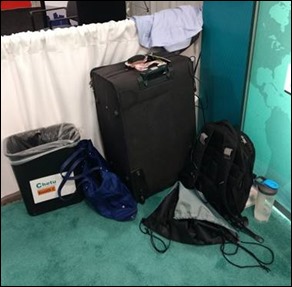 This booth was empty of people but full of luggage, including someone’s shirt hanging over the pipe-and-drape to the empty booth next door. A closer look revealed the HIMSS18 Exhibitor Move-Out Bulletin in the trash can. I didn’t read it, but I’m sure it had instructions about how to depart gracefully. Several booths had trash on the tables, empty bottles, and were in general disarray. 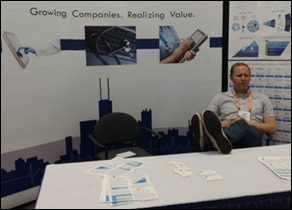 Leaving your booth unattended is not only a waste of money but also a potential business liability. Beware of sketchy characters who might decide to make themselves at home and confuse potential customers. 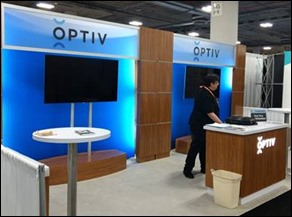 I had been looking for the Optiv booth since the opening reception, when I came across it and found it interesting because there was nothing about the booth that said what the company did. I couldn’t find it in the directory, and since they were a first-time exhibitor, I wanted to see what they were all about. By 1:15 today, they had everything packed up, the screens turned off, and the remaining booth staffer was more interested in packing then chatting. 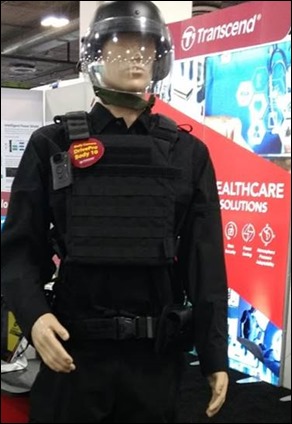 Transcend had the latest fashion for hospital security personnel. We wandered around looking for the Uber Health booth, but all the reps were busy assisting other customers. 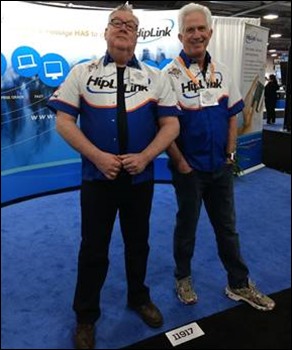 We had a good chat with these guys at HipLink, who always look great in their racing shirts. One was rocking some great tennis shoes and they shared their secrets of how to stand just on the edge of the more-padded booth carpet to give your feet a break. I’ve written about them for several years – they’re always engaging and have a variety of solutions including messaging and business continuity. They cross industries to utilities, transportation, and a host of others. We talked about the vibe in Hall G and one commented that it was “Trade Show, Old School.” We laughed about show swag: pens that don’t write, flashlights that are dead by the time you get them home, and all sorts of squishy stress relief items. Someone had abandoned a squishy tree in their booth and it was hiding behind their desk display. Note the lack of cell phones, lack of clutter, and total focus on the aisle. These guys are pros. 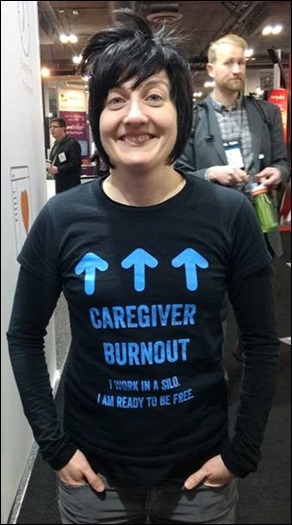 These folks from CosmoKnows became frustrated with lack of communication between different care venues and were tired of waiting for vendors to solve their problems, so they started their own company. Their enthusiasm was contagious, for sure. 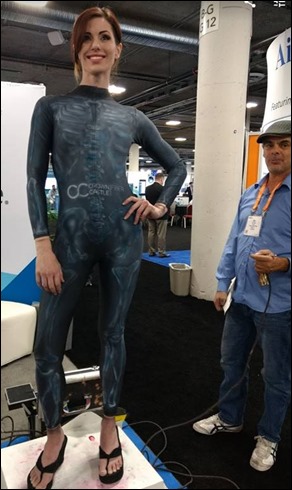 The body-painting weirdness continued today, this time with an airbrushed skeletal system. 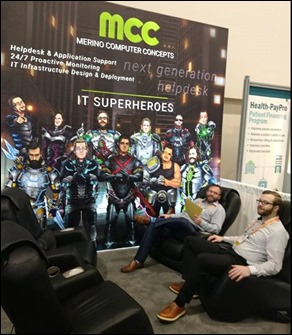 The “First Time Exhibitor Stylin’ and Profilin’ Award” goes to Merino Computer concepts. It was late in the day and they were in massage chairs, but they were engaging. If you look carefully, you can see the booth staff represented in their IT Superheroes montage.

I was puzzled by these InstaMed bottle openers.

By the end of the Booth Crawl, I was dragging. Jellyfish Health saved the day when they offered me a cold Diet Coke. It was nearly 3 p.m. but the booth staff was still fresh and eager to talk even when the booth teams around them were starting to bail. 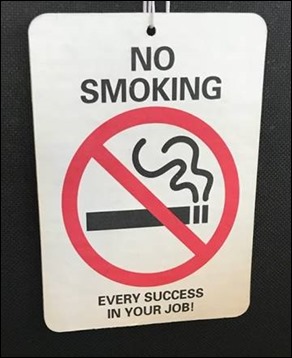 It was then time to head to the airport. Due to the traffic, I had plenty of time to catch up on email and texts. My favorite HIMSS BFF sent me this picture from his Uber. To all of our readers, whether you attended HIMSS in person or vicariously through our posts, we wish you “every success in your job.” Another HIMSS is in the books and we’ll see you next year in Orlando!