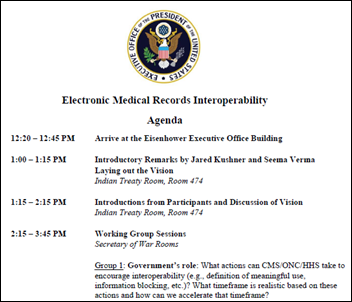 The White House’s Office of American Innovation will host a half-day meeting Tuesday on EHR interoperability, led by Jared Kushner and CMS Administrator Seema Verma. Thanks to the reader who forwarded the agenda, which did not include a list of invitees. Working groups will address four topics:

Fairly few male readers are worried that incidents in their past could result in new claims of sexual harassment. HarassedMan was pursued by a male superior and urges employers to provide clear training, policies, and enforcement procedures. HISJunkie wonders whatever happened to innocent until proven guilty and also suggests that a man who is terminating a female employee for cause think carefully about the situation.

New poll to your right or here, continuing last week’s poll: women, what kind of sexual harassment have you experienced? I found my inquiry limited by the format of a poll, so perhaps I’ll follow up with a survey to answer questions such as: 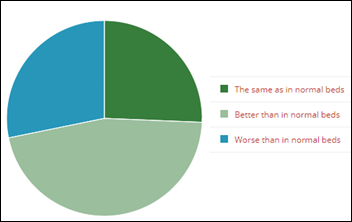 Three dozen clinician respondents are mixed on whether hospital VIP patients have better clinical outcomes. Nearly half say yes, while around one-fourth each say the outcomes are the same or worse as in the cheap seats. I was appalled at my first hospital job in learning that my for-profit employer – whose outcomes were universally terrible, as you would expect when bean counters oversee all the clinical decisions of a badly educated medical staff recruited for obedience and volume rather than quality –cleared an entire hallway to house the hypochondriac mother of our very profitable eye surgeon. Our profit-obsessed executives convened emergency department head meetings to make sure everybody figuratively genuflected to meet her every need (I got stuck running out to get the kind of wine she preferred since our nutritional services people could barely open cans and heat up food service frozen entrees) and made rare appearances in patient care areas only because she was propped up back there like a queen. At least working for a for-profit hospital shortened the path to my disillusionment with hospitals and maybe humanity in general.

Listening: new from Bully, Nashville-based grunge rockers who sound like Hole mixed with the Breeders. The tiny female singer, who has a rather chirpy conversational voice but can really belt it out cathartically when singing, looks quite a bit like Lucy in the original “Twin Peaks.” 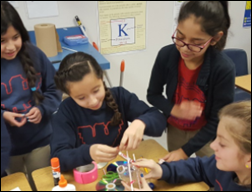 Friend at Impact generously donated $1,000 to my DonorsChoose project, asking that I focus on elementary school STEM materials (which I’m quite happy to do since I usually seek those out). I applied a dollar-for-dollar match from my anonymous vendor executive plus other matching (the $1,000 donation ended up fully funding a stunning $8,200 worth of grants) for these projects in schools whose students are almost all from low-income households: 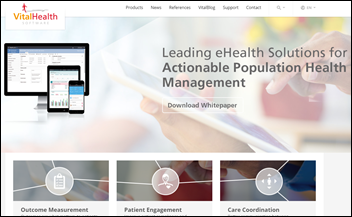 The urge to merge reaches manic levels as Ascension and Providence St. Joseph Health are reportedly talking about combining to create a 191-hospital system with $45 billion in annual revenue, eclipsing last week’s signed agreement between Dignity Health and Catholic Health Initiatives that set the short-lived annual revenue record of $28 billion. Ascension is a Cerner shop, while Providence St. Joseph Health – formed in a July 2016 merger — uses Epic, Meditech, and Allscripts. 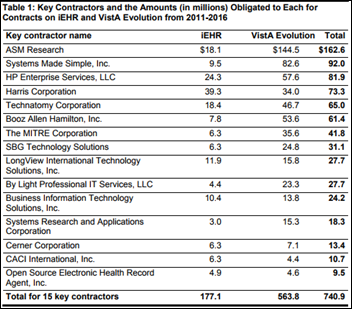 A GAO report finds that the VA spent $1.1 billion on four failed efforts to modernize VistA – HealtheVet, iEHR, VistA Evolution, and EHRM. GAO also notes that the VA has requested $4.1 billion for IT in 2018. Among the 15 key VA contractors on the failed projects was Cerner, who will sell the VA its VistA replacement system. An interesting tidbit from the report is that two of the VA’s systems are over 50 years old, both of them COBOL-based mainframe systems.

UNC Health Care (NC) notifies 24,000 patients that their PHI was contained on an unencrypted laptop stolen from a dermatology practice it had acquired in 2015. The health system pledges in the announcement to do a better job of reviewing the security of practices it acquires. 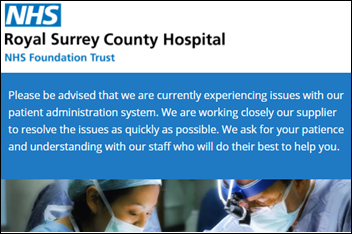 In England, Royal Surrey County Hospital goes back to paper scheduling after an upgrade to its Allscripts system fails. I think they are using the Oasis Medical Solutions PAS, acquired by Allscripts in mid-2014. 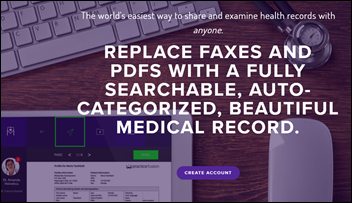 I ran across Medsender, a company I hadn’t heard of that promises to end 100 percent of medical record faxing or else there’s no cost to the customer. The company claims the product can be installed in 60 seconds and works with any EHR. Founder/CEO Zain Qayyum developed the product in 2014 while attending Marist College full time. 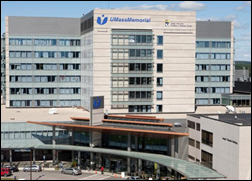 The operating income of UMass Memorial Health Care (MA) declined 74 percent in the fiscal year that ended September 30, with executives noting a modest increase in insurer payments, its $200 million in capital projects, and a $700 million Epic implementation that has taken doctors away from their revenue-generating clinic work as they build the system.