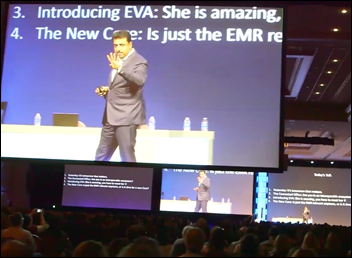 EClinicalWorks says at its annual user conference in Grapevine, TX that it had Q3 revenue of $130 million. The company notes that its EHR is the second-most widely used in the US. 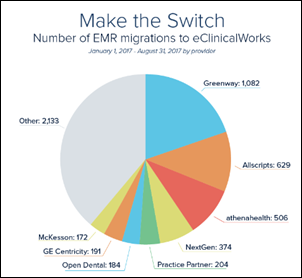 ECW’s migration statistics for 2017 to date show that the EHRs it most often replaces are those of Greenway (by far), Allscripts, and Athenahealth. 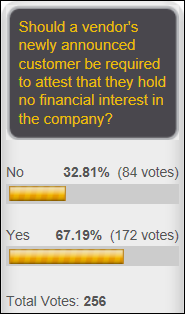 Two-thirds of poll respondents think customers that are featured in a vendor’s product sale announcement should be required to indicate whether they hold a financial interest in that vendor. The “required” part of that assertion is the problem, of course, since the obvious remaining issue is, “Required by whom?” Still, the idea that a provider’s purchase of a product wasn’t made using purely objective criteria is troubling to some since the announcement may influence others, especially in health IT-land where “I’ll have what he’s having” purchasing behavior is not uncommon.

New poll to your right or here: who among the rumored candidates would you like to see appointed HHS secretary? I can’t say I’m enthused about any of them except at least they aren’t Tom Price. 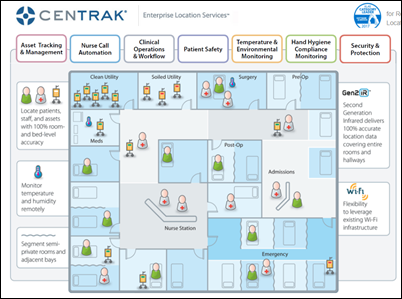 Welcome to new HIStalk Gold Sponsor CenTrak. The Newtown, PA-based company’s real-time location system has been installed in 850 healthcare facilities, with its Clinical Grade-Visibility providing certainty-based location accuracy; rapid location and condition updates; easy installation without requiring patient rooms to be closed; and an open location platform that can be integrated with EHRs, nurse call, and other systems. Its app is available for both iOS and Android devices. CenTrak is KLAS’s 2017 Category Leader for Real-Time Location Systems, receiving the highest performance score among ranked RTLS vendors. The company offers a free Enterprise Location Services Handbook and an RTLS RFP template. Thanks to CenTrak for supporting HIStalk.

I found this video describing how CenTrak is used at Our Lady of Lourdes Regional Medical Center (LA).

Thanks to the following companies that have recently supported HIStalk. Click a logo for more information.

Listening: the amazing alt-acoustic Jamestown Story, which I’ve mentioned before since it’s a project of independent singer-songwriter Dane Schmidt, whose dad Mark is a consultant with Navin, Haffty & Associates. Mark reports that his other son Jordan is one of the top songwriters in country music and has three songs on the charts right now. I’m also listening to former Porcupine Tree singer and guitarist Steven Wilson, justifiably recommended by a reader who also suggests Wilson’s older work with the tragically underappreciated Porcupine Tree as a “modern Pink Floyd.” I’m tracking Porcupine Tree while I’m writing HIStalk today and it is stunningly perfect, even in live recordings. Video from Wilson’s live 2013 performance gives me prog chills, to the point that I just now bought tickets for his US tour that starts in April, where I’ll be silently thanking the reader who showed great insight in recommending Wilson’s music.

October 19 (Thursday) noon ET. “Understanding Enterprise Health Clouds with Forrester:  What can they do for you, and how do you choose the right one?” Sponsored by: Salesforce. Presenters: Joshua Newman, MD, chief medical officer, Salesforce; Kate McCarthy, senior analyst, Forrester. McCarthy will demystify industry solutions while offering insights from her recent Forrester report on enterprise health clouds. Newman and customers from leading healthcare organizations will share insights on how they drive efficiencies, manage patient and member journeys, and connect the entire healthcare ecosystem on the Salesforce platform.

October 26 (Thursday) 2:00 ET. “Is your EHR limiting your success in value-based care?” Sponsored by: Philips Wellcentive. Presenters: Lindsey Bates, market director of compliance, Philips Wellcentive; Greg Fulton, industry and public policy lead, Philips Wellcentive. No single technology solution will solve every problem, so ensuring you select the ones most aligned to meet your strategic goals can be the difference between thriving or merely surviving. From quality reporting to analytics to measures building, developing a comprehensive healthcare strategy that will support your journey in population health and value-base care programs is the foundation of success. Join Philips Wellcentive for our upcoming interactive webinar, where we’ll help you evolve ahead of the industry, setting the right strategic goals and getting the most out of your technology solutions. 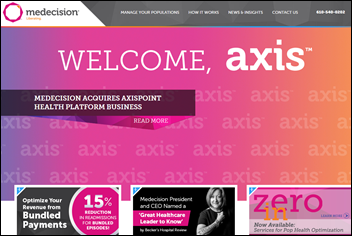 A fascinating profile of the richest man in Florida — an immigrant from Hungary who made his many billions from the electronic stock brokerage he created — contains his deceptively simple business strategy: “My strategy has always been to try to focus in on a product or service where you can create a dollar of value for 20 cents and sell it for 40 cents. The only way to do that is to use technology that has not been used before in producing that product or service. If I can create that dollar, then I’m already ahead 20 cents of earnings, and I’m going to keep way way way ahead.” Thomas Peterffy said when he introduced hand-held computers to Wall Street trading floors in the 1980s, “I think the way a CEO runs his company is a reflection of his background. Business is a collection of processes, and my job is to automate those processes so that they can be done with the greatest amount of efficiency.” Some other quotes that may be applicable to healthcare IT:

Health Catalyst promotes Patrick Nelli to CFO. He replaces Dan Strong who, unlike his replacement, has experience taking companies public. 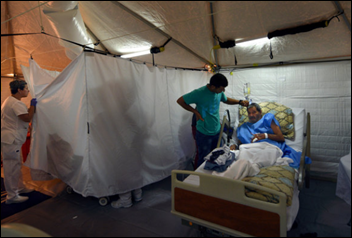 NPR covers the three-fourths of Puerto Rico hospitals that are still running on emergency power and no air conditioning. An Arecibo hospital’s cardiac unit registered 112 degrees, requiring patients to be moved by HHS’s Disaster Medical Assistance Team to air-conditioned tents. 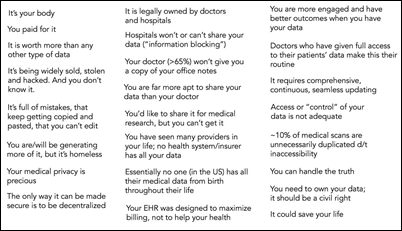 Eric Topol, MD posted this about patients owning their data. 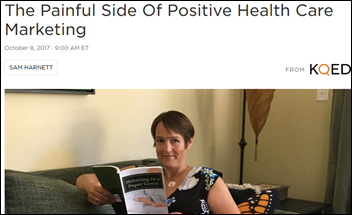 A terminal cancer patient expresses frustration with feel-good healthcare marketing that spreads false hope of miraculous recoveries with endless pink ribbons and catchwords like “thrive” and “smile out,” with the implication that people like herself who are dying maybe just aren’t being positive enough. Experts say that hospitals market themselves against their competitors by tugging at emotions, while drug companies are prohibited by FDA from running “this is where miracles happen” type messages that aren’t backed by rigorous studies or outcomes results. 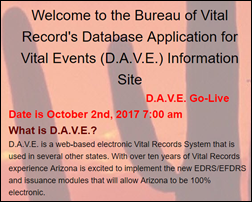 Arizona funeral homes are left unable to bury their customers due to problems with the state’s new death certificate processing system that went live October 2. Bodies can’t be buried or cremated until doctors have acknowledged the cause of death and many doctors didn’t sign up for the new system, requiring some funeral homes to go back to paper. 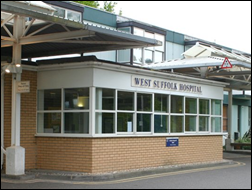 In England, West Suffolk Hospital stops using discharge letters after doctors complain that they contain errors in medication doses, a problem the hospital blames on a Cerner software bug. One doctor says a patient collapsed after following the incorrect dose listed in the letter. 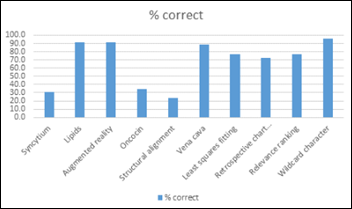 Congratulations to the 10 people (out of 252) who scored a perfect 100 percent in Dean Sittig’s informatics terminology quiz. The mean score was 68 percent, with the most-missed terms being “structural alignment” and “syncytium.” Biomedical informatics professor Dean just published “Clinical Informatics Literacy: 5,000 Concepts That Every Informatician Should Know.”

Bizarre in mass hysteria, sad current events sort of way, especially if you thought you were the only one sick of the fall “pumpkin everywhere” craze. A Baltimore high school is evacuated, dozens of students are triaged by Hazmat teams, and five students and adults are hospitalized for breathing problems after reports of a strange smell. Firefighters discovered the cause in a classroom – someone had plugged in a pumpkin spice air freshener. 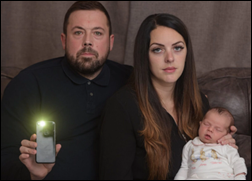 In England, a hospital’s power goes off during electrical system testing, leaving the delivery suite in darkness just as midwives are cutting the new mom’s umbilical cord. Her mother whips out her smartphone and turns on its light to allow the delivery to be completed. The new mom reports, “There was just no dignity because I had people pointing their phones at me. It was so surreal. I was thinking, what is my mum doing? Is she filming this?”