Above is the one-year share price chart of NH (blue, down 71 percent) vs. the Nasdaq (green, up 19 percent).

CEO Patrick Soon-Shiong said in the earnings call that acquisitions had swelled NantHealth’s payroll to 1,000 employees. He says synergies, a refocusing on artificial intelligence and decision support products, and transferring some employees to Allscripts as part of its purchase of NantHealth’s patient-provider portal product will enable the 30 percent headcount reduction.

Soon-Shiong says the FusionFx product that Allscripts is buying is non-core business because the company can exchange clinical documents without its interoperability component and that “this middleware that actually talks to EMRs was merely a tool and not really core and was better in the hands of an organization with hundreds of salespeople calling on customers during EMR implementations.”

NantHealth’s FusionFx was part of its July 2015 acquisition of Harris Healthcare Solutions, which had previously acquired the former CareFx in early 2011 for $155 million in cash. That offering included HIE, patient and provider messaging, and single sign-on.

From Ciro Cumulus: “Re: the question of whether Epic is a cloud-based system. Based on your criteria, I would say yes.” CC provided this review of Epic’s offering:

Poll respondents are not really sure who will benefit most from Allscripts acquiring Mckesson’s EIS business, but the customers of both companies top the list. New poll to your right or here: what kind of term is “cloud-based?” 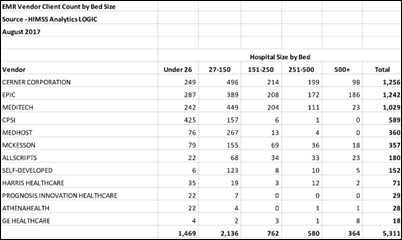 Blain Newton, EVP of HIMSS Analytics, was kind to answer my question about hospital count by bed size in providing the worksheet above. The information should dispel the notion that the inpatient EHR market is a wide-open race with many participants. My takeaways:

It’s a slow news time every year from early August through Labor Day. After that, everybody puts their nose back to the grindstone, conferences gear back up, and a flurry of work kicks in that lasts until Thanksgiving. Until then, the news is mostly an occasional big announcement (like acquisitions and quarterly earnings reports) and a product sale every now and then.

This week’s question, which isn’t really work related but interesting to me personally since all work and no play makes Mr. H a dull boy:  which musical group or performer is the best you have ever seen in a live, in-person performance?

August 17 (Thursday) 2:00 ET. “Repeal and Replace McKesson’s EIS.” Sponsored by HIStalk. Presenters: Frank Poggio, CEO, The Kelzon Group; Vince Ciotti, principal, HIS Professionals. The brutally honest and cynically funny Frank and Vince will analyze the Allscripts acquisition of McKesson’s EIS business. They will predict what it means for EIS’s 500+ customers, review what other vendors those customers might consider, describe lessons learned from previous industry acquisitions, and predict how the acquisition will affect the overall health IT market. Their 2014 webinar on Cerner’s acquisition of Siemens Health Services has generated over 8,000 YouTube views.

Nordic expands its Madison, WI office, adding space for another 60 employees. The company says the new space won’t last long as it rapidly expands beyond its 800 employees and 2016 revenue of $180 million. 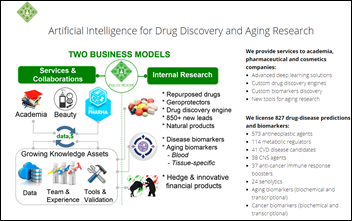 Technology company The Bitfury Group and Baltimore-based AI startup Insilico Medicine will work together to develop blockchain applications for healthcare.

HIMSS Analytics expands its Logic health IT market intelligence platform with international data, increasing its coverage to 380,000 facilities in 47 countries, including 100 percent of US hospitals.

In India, the head of a state-run medical college is suspended after the deaths of 60 children in the past week – at least 30 of them on Thursday and Friday alone — that local newspapers claim were due to the hospital’s oxygen vendor cutting off the hospital’s supply after it accumulated $90,000 worth of unpaid bills. The administrator says he repeatedly warned the state that the hospital didn’t have the money to pay the overdue oxygen bills but was ignored. Witnesses say doctors handed out manual resuscitator bags to family members asked them to pump it themselves as many of them watched their children die needlessly.

In Ireland, Mater Hospital’s storage-area network fails, forcing the hospital – which is among the country’s busiest – to divert ambulances and cancel appointments.

Here’s Vince’s final HIS-tory installment on Cerner, closing out a nice look back on the company’s history.