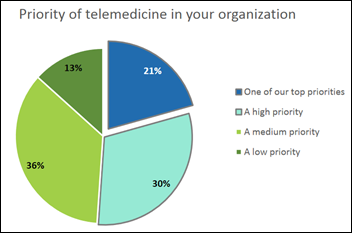 A recent survey conducted by Reach Health on the status of telemedicine initiatives at healthcare organizations identified that these programs are evolving from specialty offerings to mainstream services.

Survey participants represented a broad mix of healthcare organizations. More than half of the 436 respondents were from teaching hospitals or systems, with just over a quarter from non-teaching hospitals or systems and slightly over 10 percent from physician practices. Around a third (31 percent) of the organizations have revenues of $1 billion or greater, 21 percent have revenues between $50 million and $1 billion, with just under half (48 percent) at the low end of the scale with under $50M in revenues.

The overall priority of the telemedicine program at an organization, as ranked among other provider priorities, had a strong correlation with success. Telemedicine programs with a dedicated program coordinator or manager are also 20 percent more likely to be highly successful.

Over half of participants indicated their telemedicine platform was primarily purchased or licensed from a vendor. In general, larger organizations are more likely than smaller organizations to build systems internally. However, the survey results indicated that the mix of build vs.buy is highly consistent across the spectrum of organizational sizes.

Over the past three years that the survey has been conducted, there is a clear transition toward enterprise level programs instead of departmental initiatives. A key driver is improving ROI with several primary motivators, including improving patient satisfaction, keeping patients within the health system, securing reimbursement, enhancing the reputation of the organization, and increasing provider and staff productivity.

Activity has increased across the board and for all settings. However, active E-visit programs grew by 40 percent in 2017 and general practice initiatives also showed strong growth. Maturity levels of programs vary. Service lines requiring access to specialists, especially those in increasingly short supply, are maturing more rapidly than the more generalized service lines. Over 70 percent of the survey participants operate telemedicine programs within the boundaries of a single state.