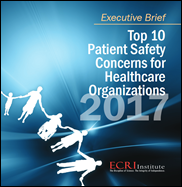 From Greek Goddess: “Re: Epic. As you’ve shared, its non-marketing department has done a good job of making operating margin and revenue growth part of the industry narrative, claiming causation with Epic’s EHR. You’ve been a voice of reason here, along with Wall Street and others – stating the obvious that the tide has risen for the entire industry under more reimbursed care under ACA and Medicaid coverage. The proposed Republican plan will cause 14 million people to lose coverage next year per the CBO. It will be interesting to see what Epic’s non-marketing department does to pin those falling margins on the competitors if that happens.” Perhaps Epic’s snazzy charts will show that their clients enjoyed less-dramatically reduced margins than those of their competitors. It’s meaningless anyway since, as is nearly always the case in healthcare, correlation is easy to observe but causation is nearly impossible to prove.

From RIF’ed Me a New One: “Re: Aetna. Several friends were let go yesterday and were told it was because of the failed Humana acquisition. I’m wondering if anyone else was affected?” I assume that if HIStalk readers are reporting it, it probably affected Aetna’s Medicity or iTriage groups. Anonymous reports on TheLayoff.com suggest that both Aetna and Humana have been paring headcount since the federal government turned the hose on their mating ritual.

From Slammed CIO: “Re: HIMSS17 unsolicited follow-ups. Vendors are contacting me claiming that I visited their booth at HIMSS17, ones I didn’t talk to then and have no need to talk with now. Has something changed at HIMSS? I’m curious if other attendees are having this experience.” I’ve received only a handful of emails, and while I don’t recall having visited the booths of a couple of the companies that sent them, I might well have allowed them to scan my badge so I could get a snack or lip balm or something.

From Julian Assuage: “Re: anonymous communications. How can I send you something with full anonymity?” My rumor report form is anonymous other than it captures your IP address, which is inherent in the form tool I use (although I don’t look at the IP address anyway). You could use Guerrilla Mail, which offers both disposable email addresses and the ability to send anonymous email without registering or paying. Either method supports adding attachments if you are inclined to provide supporting evidence.

From Pellegrino: “Re: Elaine Remmlinger of ECG. She was supposed to start a project with us and is retiring, effective immediately. It seems the reported bloodletting of the former Kurt Salmon employees is true.” ECG confirms that Elaine has retired as of Monday, but adds that she will probably be transitioning clients and projects for a few weeks. 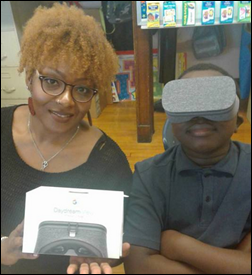 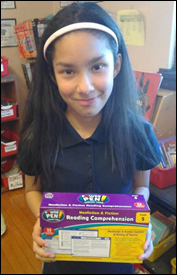 We funded the DonorsChoose grant request of Ms. A in Illinois, who created a family involvement and social-emotional learning program for her community that is “plagued with low social-economic ills, gang infestation, and violence.” We provided VR headsets, geometry kits, robotics and electronic doodling pens, and other interactive tools to allow “virtual field trips.”

Aging programmer test – how many of the four long-obsolete programming languages above can you identify without Googling? 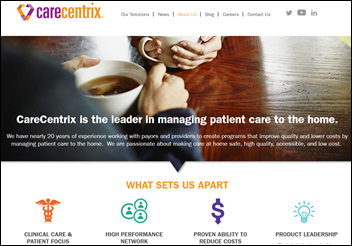 The Hartford business paper profiles CareCentrix, which manages technology-powered post-acute care services for insurers. The company recorded $1.4 billion in revenue in 2016 in managing 23 million covered lives. CEO John Driscoll was formerly president of Castlight Health and was a Medco executive. 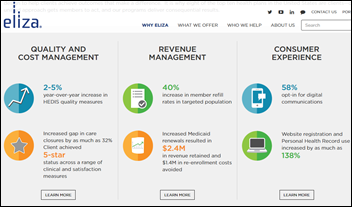 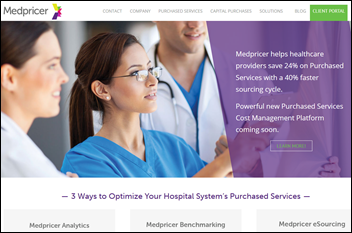 A federal court rules that the contracts of medical supply competitive bidding site Medpricer violate anti-kickback law since the company charges fees as a percentage of the dollar volume purchased. The federal judge determined that the company violated the law since federal healthcare programs could eventually be billed for the goods. Medpricer sued medical device maker Becton, Dickinson, and Co. for refusing to pay its 1.5 percent fee for three successful bids even though Becton had inserted language into its bid indicating that it would not pay any fees. 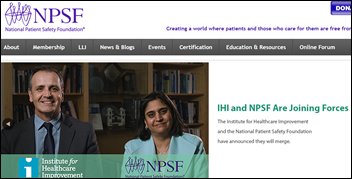 The National Patient Safety Foundation and the Institute for Healthcare Improvement will merge. IHI President and CEO Derek Feeley will lead the combined organizations. 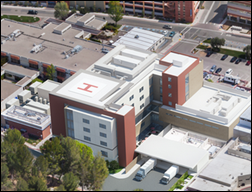 GetWellNetwork completes integration of its interactive patient care system with the VA’s VistA and other technology platforms.

The President nominates Scott Gottlieb, MD to run the FDA. He is a venture partner, investment banker, and hedge funder advisor who sits on the boards of several drug companies and has advocated FDA de-regulation. He was FDA’s deputy commissioner for medical and scientific affairs from 2005 to 2007, director of medical policy development before that, and a member of the Health IT Policy Committee.

Trade association Health IT Now urges HHS Secretary Tom Price and Congress to review ONC’s regulatory role in health IT, citing ONC”s plans to review EHR product safety that are seemingly in conflict with FDA’s role and ONC’s “we’ll know it when we see it” certification process. Health IT is a non-profit group, but incorporated as a 501(c)(4) organization, meaning it can engage in political lobbying, endorse candidates, and make political donations. Health IT Now’s odd lot of members include drug companies and few second-tier healthcare associations, with notable dropouts over the years that I noticed in comparing old vs. new member lists being the American Academy of Nursing, the American Cancer Society, AHIMA, ANA, IBM, and several hospitals. 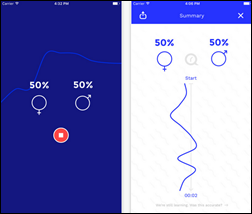 A Sweden-based design firm creates GenderEQ, a free iOS app that analyzes the percentage of time males and females speak during a meeting. I like the idea of calling out unintentional gender bias, but the app’s inherent shortcomings are obvious: (a) it may not always identify gender correctly by voice alone, and (b) it is not unreasonable that those of one gender might speak more than the other in a given meeting simply because of who is in the room or what roles they are serving in the meeting. I suggest a companion app that I’ll call TwitEQ, which matches who talked the most with the perception of fellow attendees that their comments were useful. Meeting dynamics encourage everyone to speak up, even those whose comments are of marginal value or relevance, especially in hospitals where too many people are invited and even more show up because they would otherwise feel slighted that decisions would be made without their self-assessed expertise. 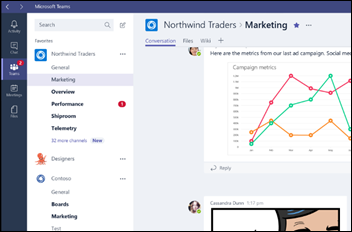 Microsoft begins the rollout of Teams, its free workplace collaboration platform and Slack competitor, to Office 365 users. Somehow it’s comforting to see Northwind Traders used as a sample business as Microsoft always does.

A review of an asthma study conducted using Apple ResearchKit apparently reaches an unexpected conclusion – fickle phone users are just as likely to allow their attention to wander from a clinical study over time as they are their use of any other app, as 6,500 baseline users yielded 2,300 who actively participated and 175 who completed a six-month milestone survey. Still, it’s not easy assembling a study cohort in general, so it’s probably not a bad outcome.

A Slate article ponders whether big data can be applied to predict when someone will die, contrasting the unbiased predictive capability of technology vs. the optimistic, subjective guesses of physicians. A NEJM opinion piece written by a Harvard ED doctor who is working on the technology suggests that the best use of such algorithms is by patients and families who can then make non-healthcare decisions for their remaining time, or as the Slate article concludes, “freeing us from trying to live longer so that we can just live.” 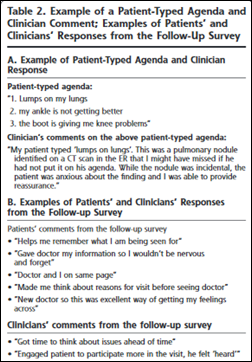 A tiny study performed in a safety net clinic finds that both doctors and patients benefit when patients are given permission to enter topics of concern into the EHR visit note before their arrival. 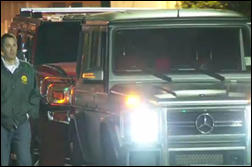 Three clinicians from University Medical Center (LA) testify that they don’t know who entered a description of “accidental discharge of a gun” in describing the ED treatment of the wife of slain former pro football player Will Smith of the New Orleans Saints. Smith was driving drunk in New Orleans in April 2016 when he rammed the car of another man who then shot several times into Smith’s car, killing Smith and injuring his wife, Raquel. The attorneys of the shooter hope to use the medical record entry to get their client a new trial in claiming that Raquel Smith told the ED staff that her shooting was accidental. The clinicians say the description might have been entered by a medical billing coder who just chose the first available computer dropdown, noting that Raquel Smith’s chart contains another incorrect entry. When asked what Raquel Smith said when she arrived in the ED, the trauma director replied, “Going from memory, I think it was just, ‘I was shot,’ but that was about 900 gunshot wounds ago."”

Weird News Andy questions the wording of a description of a spontaneous breathing trial, which involves cutting back on ventilator breathing assistance to assess the patient’s ability to breathe on their own. WNA challenges this sentence: “If it is not clear that the patient has passed at 120 minutes the SBT should be considered a failure,” wondering if the purpose of the test is to kill the patient.