I was able to sleep a bit later this morning – no breakfast meetings or client calls. Trying to determine which sessions I want to catch has been an exercise in frustration. It feels like most of the ones I’m interested in all occur at the same time.

While I was looking at the short list of possibilities for today and eyeballing what I missed, it struck me that some submitters were much better at creating eye-catching titles than others. Some of my favorites:

A couple of the sessions I was particularly interested in happen to occur on Friday, so I’m looking forward to finding them online. I’m also looking forward to reviewing “What Do You Do When Your Improvement Project Fails” because it’s near and dear to my heart. When I went for my Lean Six Sigma certification, my first project was a complete and total bust. It ended up being a good thing, however, since it led to the creation of an upgrade methodology that I still use today, but it was definitely painful at the time, not to mention embarrassing.

I had mentioned yesterday about the lack of recycling (or discussion of single stream management) and a reader commented that there were signs near the waste receptacles. I made a more concerted effort to notice today and still didn’t find any more than I had already seen. The conference center did have divided bins (waste vs. cans/bottles) that I saw previously and failed to acknowledge, but most of the bins I saw in the exhibit area were unmarked.

My hotel had no mention of recycling whatsoever. They did mention on the express check-out card that they don’t issue paper bills for environmental reasons. Still, I needed a paper copy for reasons of my own and the desk clerk actually scolded me, saying I’d receive it via email by the end of day. It’s midnight in my world and I still haven’t seen it, but I guess in Vegas time they have a couple more hours. 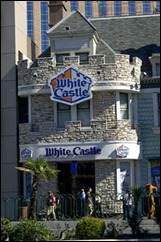 I noticed some bachelorette-appearing ladies coming out of Treasure Island in what appeared to be last night’s clothes. They were sporting some adult-themed balloon hats and I’m just sorry I wasn’t fast enough to get a picture. It’s a good thing that what happens in Vegas stays in Vegas because they were looking pretty rough. Perhaps they were headed up the street to White Castle for some hangover therapy. I didn’t remember seeing it on the strip last time I was here, but the strip can be overwhelming and things are easily missed.

I did a last-minute swing through the exhibit hall and heard quite a few comments about people getting ready to head out. I do wish I had more time to see more products and attend more sessions, but staying through Friday wasn’t an option. I’m not thrilled about the schedule shift that occurs when HIMSS is in Las Vegas and it seems like others aren’t so thrilled either. Next year we’re back in Orlando, which is challenging for its own reasons. I wish HIMSS would reconsider other options for the meeting.

The show floor was still fairly busy although nothing like opening day. I had equal numbers of reps who were smiling and trying to engage people walking by as compared to those who were looking pretty bored. I popped down to Hall G to see a couple of specific vendors and ended up running into someone I hadn’t seen in ages and chatting took up most of my remaining time.

It takes a lot of discipline to try to see everything and do everything at HIMSS. I’d like to blame my broken toe for slowing me down, but I think the whole event is almost too much. Thanks again to Edifecs and their #WhatIrun for literally making it possible for me to limp my way through the week in comfort.

I was fortunate again this year to have a vendor executive offer to share his car to the airport, allowing me to bypass the taxi queue craziness and providing a nice chat on the way. I enjoyed getting his thoughts on the industry and the move to value-based care. The airport was surprisingly low key and I made it through security in record time, for which I was grateful.

During my flight, I was able to catch up on the unbelievable amount of email that had come in during the week. One was from a PR firm correcting me for not using their client’s full name in my mention. Although I appreciate their position and their diligence to the brand, I hope they understand that (a) HIStalk is not my full-time job; (b) sometimes we write quickly and on the fly; and (c) during HIMSS, I usually end up writing at 1-2 a.m. after hitting the show all day and at least three or four vendor events each night. An email from a different vendor used the analogy of “a tree falling in a vast, cold, poison-ivy infested forest” gets my compliments for best prose of the day.

Weird News Andy wins the award for best fashion advice in the “What Not to Wear” category, sharing a piece explaining the perils of wearing shoes with gun-shaped heels and bullet-shaped accents.

I also received a note from a vendor exec apologizing for missing HIStalkapalooza. Apparently there was an EHRA dinner and awards ceremony that overlapped and they couldn’t make it to Mandalay Bay before the doors were closed. Another physician reader who did attend asked if I had any photos of her team and John Halamka doing the limbo at HIStalkapalooza. I am very sad to say that I do not, but if anyone does, please share.

What has been the best part of HIMSS? Email me.