Usually the travel day to HIMSS is uneventful and this year didn’t start any different. I boarded my flight at O Dark Thirty and settled in to watch some software training videos that my client had created, since I knew there was a good chance they’d put me right to sleep. After a nice nap, it was time for email clean up.

I must have missed this before, but CMS has extended the Medicare EHR Incentive Program hardship deadline until July 1, 2016. If you haven’t submitted your application yet and want to avoid adjustments to your 2017 Medicare payments, you have plenty of time.

I touched down in Las Vegas right around the start time of the Hot Chocolate 15k run, which had multiple roads closed. Fortunately I had a taxi driver with a great personality, which made the delay tolerable. Although the roads were closed, I never saw any actual runners.

Speaking of runners, I mentioned previously that Edifecs has their #WhatIRun campaign live. I’m flattered to have my profile posted under the healthcare leaders section and appreciate their willingness to keep me anonymous.

For those of you who pop over to take a peek, yes, the comment about the refrigerator is true. Once I arrived at my hotel, I found out that my promised (and paid for) early check-in had been pushed back an hour. It was difficult to find somewhere to hang out that wasn’t completely smoke filled, which reminded me why I am not a huge fan of Las Vegas.

Once I finally received my room keys, I was quite surprised (as was he!) to find a naked guy who had apparently just stepped out of the shower. The front desk was apologetic and reversed my early check-in fee and also upgraded my room. It wasn’t their fault, though – the guest had checked out before he was actually ready to depart, so let that be a good lesson to only check out when you’re ready and also to use the privacy lock.

Once I was settled, I enjoyed the opportunity to get outside and actually see the sun since there is still snow on the ground in my world. I’m always saddened to see the panhandlers on the elevated walkways. Although it’s a complex problem, one man today was clearly having a psychotic episode outside the Palazzo. Hotel security were keeping an eye on things since he was accosting pedestrians. I hope he gets the help he needs.

The fountain at the Wynn was getting some maintenance and I imagine electricians who own dry suits are in demand across down. Registration was smooth, although there was a snafu with picking up bags and materials. At the registration area, they were telling people to come back in three hours to get everything. I decided to wander around the meeting areas and found the bag desk a few dozen yards away, fully stocked and ready to distribute. There were several people headed to the CHIME golf outing toting their clubs. 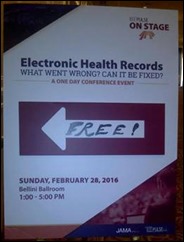 I stumbled across this Sunday session, featuring AMA president Steven Stack as well as Nancy Gagliano from CVS Minute Clinic and some others. From the time I saw it to when I returned to snap a photo, they had added the “free” to the signage. I registered and chatted with some of the staffers, who were very enthusiastic about their mission. I popped in for a bit and didn’t learn anything new, so headed back out for some more sun. 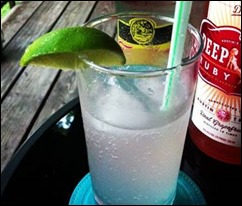 I connected later in the day with Dr. Lyle and some of his Healthfinch colleagues, who were on their way to a get-together at the Palazzo. My favorite part of HIMSS is catching up with people that I may only see once or twice a year. The rest of the evening was spent with friends old and new, as we christened the Southbound Greyhound as Dr. Jayne’s Official Drink of HIMSS16. (I personally like to muddle in a few blueberries, but there were none to be had.) Note to the bartenders at Treasure Island: you might want to stock in a few more bottles of Deep Eddy Ruby Red. You’re going to need them.

I was trying to unwind this morning in preparation for this evening’s big events, but despite the privacy sign on the door, the housekeeper opened the door without knocking. I always use the privacy lock, so she wasn’t able to get in, but it was annoying, especially since it was barely past 8 a.m. I know they’re in a hurry to turn over rooms, but I’m not checking out today and I did have the sign on the door.

I’m going to meet up with a good friend for lunch and lay out the battle plan for the week. Unfortunately I’ll miss the opening keynotes due to HIStalkapalooza prep, but I don’t think I’ll be missing anything earth-shaking. 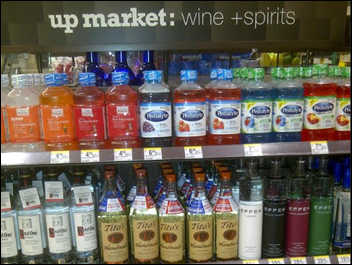 For the rest of you prepping for the big night, may I suggest the liquor section at Walgreens, which has the Pedialyte thoughtfully displayed with the Ketel and Tito’s. I’m looking forward to the dance-floor stylings of Matthew Holt as we Party on the Moon. See you there!