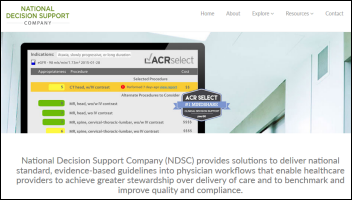 Tell me about yourself and the company.

This is company number three for me in my career. It’s been 27 years in healthcare IT. I started back in 1992. I think that’s before healthcare IT was even an industry. [laughs]

I’m an entrepreneur focused on disrupting inefficient processes, keyed in on healthcare. It’s never really been about a market size opportunity for me. It’s something that somehow clicked for me, something that I found my passion for.

Startups won’t succeed unless you are waking up in the morning ready to take on the world. It’s intense. It’s pressure packed. I’ve been fortunate to have found a love in virtually everything that I’ve been involved in.

I’m getting a big charge out of NDSC. We’re at the precipice of defining how guidelines and pathways can be used in an actionable way, beyond paper and flowcharts, to impact outcomes in a positive way. We wake up every morning thinking that we’re doing something great.

What is the status of Medicare’s imaging appropriate use criteria?

It’s for outpatient Medicare imaging, the use of appropriate use criteria for all high-tech diagnostic imaging services. The original target was January 1, 2017. That has since been delayed. They haven’t set a specific date, but if you look at the regulations, all the timelines line up to January 1, 2018.

Is it a given that properly presented appropriateness guidance will change usage patterns?

How wouldn’t it? It really comes down to how it’s implemented. If you’re going to put guidance in front of a doc who’s about to do something wrong, where normally that order would just go through, and you give him guidance, how would it not have a positive impact?

The mechanisms that commercial providers use are radiology benefits management services. That’s an old-world version of what CDS does. It’s phone call driven. I’m going to make a call. I’m going to tell somebody that I want to order a test for a given reason. They’re going to look in a book. They’re going to say that’s a good reason or it isn’t.

CDS is embedded in the ordering process. It’s at the point of service. The easiest way I can describe it is that it’s the difference between calling the travel agent back in the day or logging onto Expedia. Implemented properly, there’s absolutely no reason why it won’t work. There’s evidence that shows this in multiple studies.

Did you look at existing clinical decision support models to decide how to present the guidance without being obtrusive or causing resentment?

There are two things that we hold near and dear to our hearts. First is the source of those criteria, meaning s credible source using a defined process for the answers that are given. It doesn’t mean that everybody’s going to agree with every piece of guidance. That’s impossible. But having a defined process and a recognizable and a reputable source is key.

The second big one is that workload has to be a seamless in what they’re working in. There were earlier CDS products in the market. They were standalone solutions. It was go to this portal, click 14 times, and it will give you an answer.

Everything that we do leverages the existing EMR infrastructure, whether it’s Epic, Cerner, etc.. The user never leaves their environment. In the best integration, they don’t even know that it’s there unless they do something outside of the guidance.

Even then, the advisories are those that are native to the EMR. It’s like any other advisory that they would see. There is no ACR Select physically on a user’s desktop when they’re working inside of an EMR.

That level of integration requires both technical work as well as convincing those EHR vendors to allow a separate system to present messages to their users. How did you make that happen?

The source of the content as a standard really got their attention. That was one thing. The fact that we were coming to the market, there was something that recognizable, that it’s something that they believe that if they did it right, all their customers would use it, gave us a platform to get in front of them and work with them.

I would argue that these guys get a little bit of a bum rap with respect to interoperability. I know the stories. We’ve had nothing but positive experiences with the major EMR vendors out there. There are always improvements that need to be made. There’s always timing issues with release cycles. But we use whatever industry standards are out there and are available, whether it’s XML or Web services. Even now they are working with us on the new FHIR and SMART standards.

It was hard. It took time and an unbelievable amount of patience. Every release, the integration gets better. We are reliant on their release cycles. We move faster. We’re a smaller company. These guys have thousands of users. Even if they wanted to turn on a dime, they couldn’t. It’s just taken time, an open mind, and some patience.

Primarily it’s whoever is at risk for payment. The majority of our clients now primarily use ACR Select for their at-risk population. In scenarios where there’s a third-party payer involved, there’s a relationship there, too. Bit it’s primarily the providers, because it’s an efficiency on their end and a savings on their end. If the risk starts to shift to the providers, we’re going to see even more of that.

Your website suggests that you’ll be moving into other types of order guidance.

Yes. ACR Select keeps me up at night. The new stuff, which is something called Care Select — which we’re announcing at HIMSS — is what gets me up in the morning. Care Select is going to be a revolutionary way of looking at how to put guidance at the point of care for a clinician around these high-impact areas in an actionable way and a credible way.

We’re leveraging everything that we learned, everything from how to structure content so it can be read by an EMR to integration into the physician workload. Everything that we learned through ACR Select, we are leveraging for Care Select. Whether it’s for high-cost drugs, antibiotic stewardship, admission criteria, or anything in that area where providers are identifying high variability of care that is resulting in quality issues, Care Select is going to be able to handle.

We’re focusing right now on our Choosing Wisely criteria as well as criteria from the Number Needed to Treat, which will be very familiar to the ED docs out there. That’s our baseline. Like I said, that’s what gets me out of bed in the morning.

What kind of employees do you have to get the clinical content into the technology?

The thing with their criteria is they’re all narratives. I’ll look at a 40-page document that talks about how to image for low back pain or how to treat a full thickness rotator cuff tear. Literally, it’s a 40-page narrative. How do you turn that narrative into structured data of inputs and outputs that are consumable and known by the EMR so you can put it into the workflow?

We have informaticists on our team that do nothing but that — take these known sets of guidelines, criteria, and narratives and turn them into something that is consumable by the EMR. We have tools to do that. We have tools to localize them for site-specific needs, too.

That’s a big piece of the organization. I would say 75 percent of the company is informaticists and engineers. The rest are admin, sales, and marketing.

Since the clinical content is managed by mostly non-profit associations that have already earned the respect of your users, do you have to license that intellectual property from them?

In some, cases we have to. In others, we don’t.

We actually prefer to license. We’ll run into a society that has built criteria just because it’s the right thing to do. We’ll approach them and show what we’re going to do. Get someone excited. Then we tell them that we want to give them money.

We want to give them money because we want them to have the resources to continue to build and support. It costs money to do that. These are not-for-profits. To the extent that we’re able to generate dollars for them to continue doing good work, we want to facilitate that. We want to foster that.

Where do you see the company in five years?

Healthcare is undergoing a significant change, driven by alternative payment models and everything else. Everything else fixed and situated on and what we hear every day about how we’re spending too much money on care without comparable outcomes to Finland or Sweden or whatever other homogeneous population that is out there. We see ourselves as at the precipice of helping the market to define and to drive standards of care and put those at the point of service such that they can be acted on.

There’s a lot of effort being spent on deep analytics to understand outcomes and understand where the problems are. Once they’re defined, how do you act on it? How do you impact on a doc’s decision when they’re in front of the patient, when they’re documenting in the EMR? That’s the next step.

I could never predict five years out. But where we’re going is around actionable guidance embedded seamlessly in a physician’s workflow that will prevent mistakes from being made, driving appropriate care in accordance with agreed-upon pathways and guidelines. Five years from now, we’ll go from 100 customers to 1,000. That’s as accurate a statement as I can give you.