The Navy awards Leidos an additional $50.7 million for Cerner-provided hosting services for the DoD’s EHR as I reported here earlier, overriding the objections of IBM, CSC, Amazon, and General Dynamics. The announcement says the Cerner system can operate regardless of who hosts it, but its functionality would have been limited “to utilizing only DoD data, which greatly impacts the accuracy of analytics given the  much smaller population of data which, in turn, could negatively impact patient outcomes” and that Cerner refused to allow connection to its managed services. The document adds that third-party hosting “could adversely impact Cerner’s financial viability and competitive market advantage.” The DoD says the new award won’t increase the overall contract spending limit of $4.3 billion.

From Ickey Shuffle: “Re: Sandlot Solutions. Massive layoffs and the entire sales team was fired. They barely made payroll. Rumor is that ICW may buy the customer base.” Unverified. I reached out to board chair Rich Helppie but haven’t heard back. 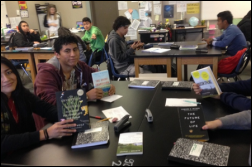 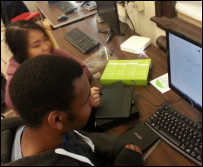 We funded Mr. Beeler’s DonorsChoose grant request for 13 environmental and science books for his high school class. He says many of the students at his Texas school go to work immediately after school and don’t get home until their work’s closing time, with only 14 percent of graduates going on to college, so he’s trying to motivate them. Mr. Chen’s class from Massachusetts also checked in to say they’re using the digital drawing tablet we provided to do sketches in Photoshop, then convert their ideas to CAD and then print them using donated 3D printers.

Iatric Systems included a question about my HIMSS exhibit hall pet peeve (booth people playing with their phones) in their employee role-playing training for the upcoming conference In return, they donated $500 to my DonorsChoose project, which funded these requests: 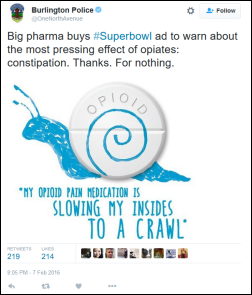 I have zero interest in sports but had the Super Bowl turned on for background noise. It caught my attention when I heard an ad pitching a prescription drug for treating opioid-induced constipation. We must have one heck of a doped-up population if the constipation of long-term narcotics users justifies running a multi-million dollar 60-second Super Bowl ad. The drug industry estimates that it’s a $2 billion market as Americans seek a second pill to fix the problems caused by the first. The commercial didn’t mention the drug Movantik at all, probably to avoid the FDA’s requirements that it rattle off a long list of side effects (third pill, anyone?) Movantik costs $300 for a month’s supply. I wonder how many patients will seek a prescription for it because they’re having side effects from illegally obtained narcotics? A lot of what you need to know about what’s wrong with American healthcare is contained in this one paragraph.

The celebrity guest in our microscopic HIMSS conference booth Tuesday afternoon March 1 will be David Schoolcraft, an attorney with Ogden Murphy Wallace PLLC of Seattle, WA. Our “HIT Lawyer in the House” will be happy to say hello, talk about lawyerly HIT issues, or “just chat about how great HIStalkapalooza was.” Email Lorre if you are unnaturally funny, smart, or famous and want to prove it at our booth — it’s not like we’re drawing for Vespas or running a golf simulator on our $5,000 little patch of carpet, so about all we’ll have is a table to stand behind. 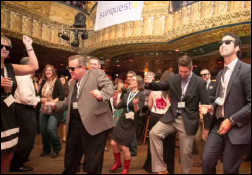 HIStalkapalooza invitation emails have gone out from Eventbrite. That service provides some nice benefits: you’ll be able to check in quickly via a barcode scan, it will send reminders that you signed up, and it will allow those whose plans change to let me know so I can give House of Blues a better estimated headcount. I’ll also know who took up a spot without attending so I can invite someone else in their place next year (the no-show rate is always at least 40 percent).

I wasn’t able to invite everyone to attend HIStalkapalooza since we needed one more sponsor to cover the cost for all the 1,700 or so people who wanted to come. I’m sorry if you didn’t receive an invitation. As usual, I invited all providers who expressed interest, then did the best I could with the people left on the list.

I had a mini-brainstorm this afternoon – since Eventbrite supports collecting online payment for tickets, next year I should simply charge the incremental price of attendance instead of just shutting down invitations once I hit the number covered by sponsors. Anyone who didn’t bother to sign up themselves or their guest who desperately wants to attend could buy a ticket for $150 or something like that instead of just being told they can’t come. My constraint is sponsor funding, not capacity, so we could handle a lot more people who are willing to pay their own way. I’ll consider that for next time.

Just as a reminder:

Like last year, the House of Blues doors will open at 6:30 and we’ll close the check-in table by 8:30. The event costs about $200 for each attendee who passes the House of Blues guy with the people-clicker, so swinging by after someone else’s party for a quick beer can wreck the already-stretched budget. Be there on time and you won’t have to listen to a muffled Party on the Moon from the casino outside the HOB’s walls.

You can follow along with whatever it is that people will tweet about the event using #HIStalkapalooza. I’m surprised that nobody has Twitter-bragged about getting an invitation. 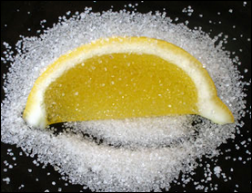 Several readers emailed to ask if we’ll have Longo Lemonade at HIStalkapalooza. I hadn’t heard of it, but figured industry long-timer Peter Longo would know (duh) so I asked him. It’s a game where you ask for a Longo Lemonade and then show the bartender how to make it if they’re stumped – apparently word has spread and many will need no further instruction. But for those bartenders who haven’t heard of it, here’s the recipe that will probably result in sugar-sticky bar surfaces all over the House of Blues:

Shake straight vodka with ice and pour into a shot class. Sprinkle a packet of sugar onto a napkin and dip a slice of lemon in the sugar to cover each side. Drink the shot and then eat the lemon slice.

February 23 (Tuesday) 1:00 ET. “Completing your EMR with a Medical Image Sharing Strategy.” Sponsored by LifeImage. Presenters: Don K. Dennison, consultant; Jim Forrester, director of imaging informatics, UR Medicine. Care coordination can suffer without an effective, cost-efficient way to share images across provider networks. Consolidating image management systems into a single platform such as VNA or PACS doesn’t address the need to exchange images with external organizations. This webinar will address incorporating the right image sharing methods into your health IT strategy.

Premier reports Q2 results: revenue up 17 percent, adjusted EPS $0.42 vs. $0.36, beating expectations for both but recording a GAAP loss of $54 million for the quarter. 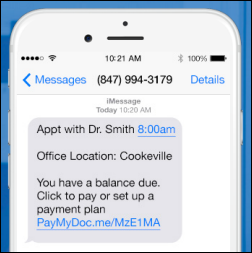 Mobile consumer payments vendor SwervePay raises $10 million in funding, increasing its total to $11.6 million. The company focuses on healthcare and auto-related services, which for appointment-setting and payments are not all that different now that I think of it.

Cognizant announces Q4 results: revenue up 18 percent, EPS $0.69 vs. $0.59, falling short of revenue expectations but beating on earnings. Shares dropped on lower revenue guidance due to expected reduced technology spending. The company’s healthcare division, its second-largest in contributing 30 percent of total revenue, had a 23 percent revenue increase, still a slowdown from previous quarters. Cognizant acquired TriZetto for $2.7 billion in 2014. 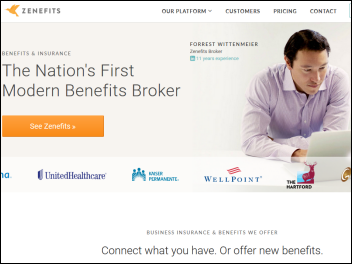 Human resources software vendor Zenefits fires founder and CEO Parker Conrad, informing employees that, “Many of our internal processes, controls, and actions around compliance have been inadequate, and some decisions have just been plain wrong.” Forbes estimates the net worth of 35-year-old Conrad at $900 million. The company, valued at $4.5 billion, has been accused of allowing unlicensed salespeople to sell medical insurance. Zenefits hired as its new CEO David Sacks, who co-founded Yammer (purchased by Microsoft for $1.2 billion) and who used the fortune he made as pre-IPO COO of PayPal to produce the movie “Thank You For Smoking.” 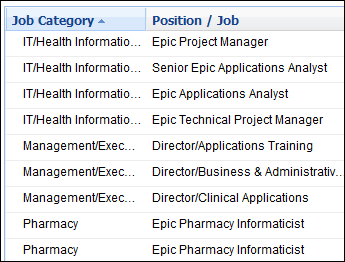 Skagit Regional Health (WA) posts 53 new IT positions with up 20 more coming in 2016 as it implements Epic, on which it expects to spend $72 million over the next five years. 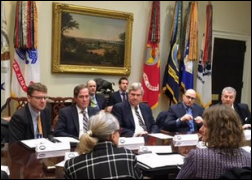 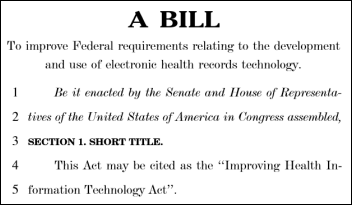 The Senate health committee unanimously passes S.2511, the Improving Health Information Technology Act. Some of what the bill contains:

The President sends Congress a $4.1 trillion 2017 budget that would raise taxes by $2.6 trillion in the next 10 years. It includes HHS funding for the “cancer moonshot” and programs to address opioid addiction, but the big jump in federal red ink would come from Medicare and Social Security entitlement programs that are being overwhelmed with retiring Baby Boomers. The budget includes $19 billion for improving the cybersecurity of government IT systems. It doesn’t address the economic elephant in the room: that even a tiny increase in increase rates could add $1 trillion in annual costs just to service the cost of the existing massive federal debt.

A medical school professor says doctors need to stop complaining about EHRs patients shouldn’t obsess over medical records confidentiality because EHR-created databases will change the way medicine is practiced and lead to new cures. He says that simple data mining can find information “lying in plain sight, no invasive procedures or testing required. We could have found it years earlier if we had had the date.” 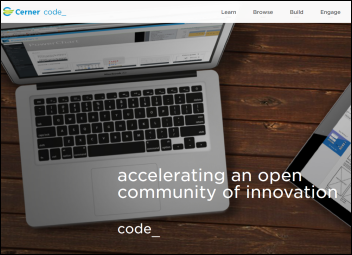 The British government will give NHS $6 billion to fund technology projects that will eliminate fax machines and paper, improve cyber security, create a new NHS website, and provide free wi-fi. Patients will gain online tools to schedule appointments, request prescription refills, and communicate electronically with their physicians. NHS hopes to monitor 25 percent of patients with chronic conditions remotely by 2020.

A tiny study finds that pediatricians who remotely evaluate children with fever or respiratory distress using FaceTime on an iPad perform just as well as those who conduct their examination in person.

Athenahealth’s Jonathan Bush, in a short interview, says that his aunt, Barbara Bush, donated $4 million in Athenahealth profits to the Barbara Bush Children’s Hospital at Maine Medical Center. He says:

The irony is the Barbara Bush Hospital just bought Epic with that money and is building a monopoly to capture referrals that they don’t have the volume to do well. A lot of the stuff they do probably should be done somewhere else. I didn’t say all this to Bar. I said, “That’s just great,” pinching my fingernails under the table.

Weird News Andy says, “I expect it to be in ICD-11” after failing to find an ICD-10 code for the claim that a man in India was killed by a meteorite. WNA codes the encounter as, “W20.8XXA Other cause of strike by thrown, projected or falling object, initial encounter.”