From the Athenahealth earnings call:

From Dixie Whistlen: “Re: top 25 blogs to read. Why did the magazine list Ed Marx on HIStalk but not the rest of HIStalk? Some of those they mentioned are not even popular.” You would have to ask the magazine. I don’t read those sites or pay attention because, like all such “awards,” it’s just a scheme to get people to click through the endless slide show to fool advertisers with a higher but meaningless metrics. One of the blogs that made the Top 25 hasn’t posted anything new since March 2011 and another winner’s newest post is from December 2013, which suggests a superficial editorial vetting process.

Speaking of junk health IT reporting and meaningless reporting intended to sell ads, I just noticed that US News and World Report is announcing its “Most Connected Hospitals” list, which it has apparently been running for years. That must offer competition to the equally pointless “Most Wired” list from H&HN that achieves little except allow CIOs to pad their resumes and hospital marketing people to place yet another logo on their ads that attempt to convince the locals of their organizational competence.

From Bob Wyer: “Re: cancelled sponsors. You said you would list them each month with the new and renewing ones, but I haven’t seen any.” I did promise to do that but I promptly forgot. Companies decide to stop sponsoring for a variety of reasons: they decide to spend their marketing money elsewhere, they are unreasonably obsessed with ad clicks, I wrote something unflattering but true that made them mad, they don’t have money in the budget, or the decision was made by a marketing person who knows nothing about HIStalk or the industry in general. Anyway, here’s the list of dearly departed sponsors going back several months. I appreciate their previous support, especially those that had sponsored for several years. 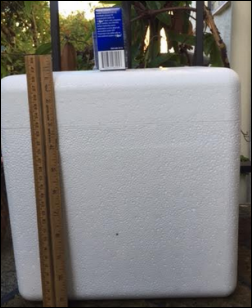 From Exotic Delicacy: “Re: Caremark. They won’t allow my prescription to be filled locally, so they ship by next-day air a 12×10 inch carton containing a 9×11 inch Styrofoam cooler packed with five ice packs. The actual meds are about 1×3 inches. Besides the cost, all of that (including the chemicals) goes into the landfill.” I was musing this week of what I call the Amazon Prime effect, where my near-daily Amazon orders create a never-ending mountain of boxes and packing material that I have to scrunch and tear to squeeze them into the large recycling bin that goes to the curb weekly. It reminds me of the department store stock boy job I had while working my way through college, in which the fun chore was feeding heaps of big, flattened boxes into the mall’s paper crusher deep in the bowels of the building. I also learned to hate Christmas gift wrap since it was stored in huge quantities in a truck trailer parked out back, causing me to freeze several times a day in November and December in bringing in more big boxes of it. It wasn’t nearly as fun as my summer job working at a public radio and TV station, which didn’t require me to do a whole lot except download satellite programs like “All Things Considered” to tape for later broadcast and to read the news for our infrequent live programming. 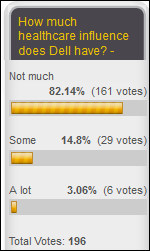 It’s apparently not just me that doesn’t see Dell as a significant healthcare IT player from my extra poll last week. Machete’s comment is an admirably concise interrogatory: “Dell’s in healthcare?”

The results of my regular poll are sobering, in which 6 percent of males and 52 percent of females say they’ve been sexually harassed at work in mostly unreported incidents. Woodstock Generation hopes a lot of the harassment happened in the 1990s when reporting was uncommon, while It’s Everywhere (Unfortunately) adds, “I was harassed by multiple attending physicians in medical school and witnessed them harassing other students and even patients. It was disgusting. As a practicing physician, I have been harassed by peers. Working with software vendor employees and consultants, I have seen entirely too much harassment, mostly fueled by alcohol and testosterone.”

New poll to your right or here: would you be willing to have your lab tests performed by Theranos?

I was interested after running a TV station’s photo of a hospital documentation sheet for a chemo overdose that a couple of readers complained that I had violated HIPAA, which is surprising since we’re supposed to be the HIPAA experts. First, the family took the photos and sent them to the TV station, presumably to bolster public opinion for their lawsuit against the hospital that was involved. Second, only covered entities (health plans, clearinghouses, and providers) are covered by HIPAA. Any other perceived breach of patient privacy can be addressed only through a lawsuit, which has nothing to do with HIPAA. 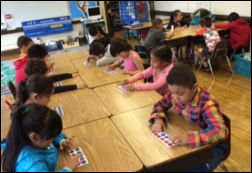 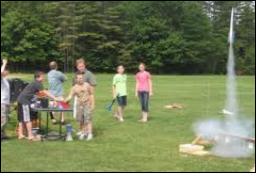 Reader Derek sent $50 for DonorsChoose, which thanks to the magic of matching funds from my anonymous vendor executive and The NEA Foundation, will provide four tablets that will be shared by three pre-K classrooms in Buffalo, NY, which they will use for math practice. Meanwhile, the photos above are of Mrs. Cole’s Minnesota first graders using the math games we provided and Mr. Burnitt’s Florida elementary school class working with the model rocketry equipment we bought. 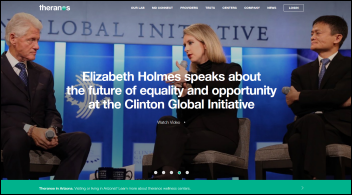 Lab innovator Theranos continues to unravel as its highest-profile partner, Walgreens, says it won’t open any new Theranos testing centers until the company answers questions about its technology and why nearly all the samples it draws are full-volume ones that are analyzed by traditional lab equipment rather than its proprietary microfluidics machines. In more bad news for CEO Elizabeth Holmes, CMS says its surveyor found nothing innovative in the company’s facilities but did observe quality control problems; some of its claimed partners (Pfizer, GSK, Cleveland Clinic) say they’ve never actually done anything with Theranos; and records show that the company has hired poorly qualified lab directors, including a part-time dermatologist who is not certified by the American Board of Pathology. Questions are also swirling about why the Theranos board is made up of old, politically connected white men without scientific or medical expertise.

Huron Consulting Group shares dropped 24 percent Friday after the company turned in decent Q3 results but also lowered revenue guidance due to expected delays in two big academic medical center projects. The company also says it has “seen a softening in demand for our performance improvement solutions,” which it attributes to stabilized hospital margins due to ACA-insured patients such that “cost reduction work at some hospitals is no longer seen as an urgent concern.” 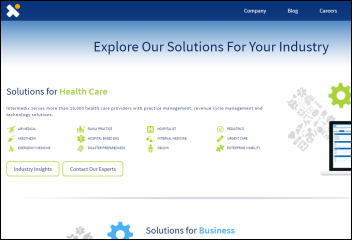 Fort Lauderdale, FL-based healthcare business services vendor Intermedix will open an operations center, innovation lab, and executive offices in Nashville, TN, creating 116 jobs. The company says the state and city “have welcomed Intermedix with open arms,” not mentioning the open taxpayer wallet that must have influenced its decision. 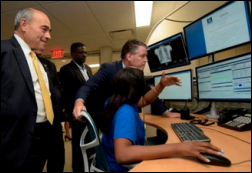 Westchester Medical Center Health Network (NY) opens its $7 million, 5,500 square foot eHealth operations center, which contains 20 telehealth monitoring stations that will be staffed around the clock by physicians and nurses. 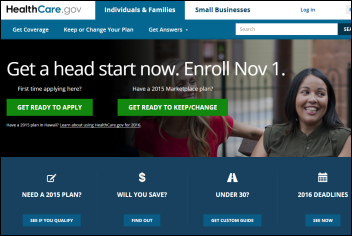 CMS goes live with an upgraded Healthcare.gov, saying the site will be 40 percent faster and will include the ability for users to see their estimated yearly costs for each plan. Features not yet ready will eventually allow consumers to filter the list of plans to those that cover a specific doctor, hospital, or drug.

A Springfield, MA gynecologist is indicted for accepting drug company bribes for prescribing its drugs and allowing its sales rep to dig through the medical records of her patients. The smoking gun is that as soon as the drug company stopped paying her, she stopped prescribing its products.

Local police in North Carolina speculate that scammers are using data from one of the recent high-profile healthcare data breaches to send unordered diabetic supplies by mail to people who who don’t need them. A recipient whose name, Social Security number, and doctor information was included on the unordered package tried to call the pharmacy number on the invoice, but it was phony. 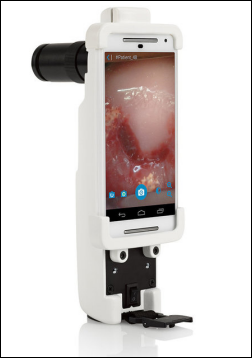 Israel-based MobileODT offers an $1,800 cervical cancer screening tool that connects a mobile colposcope to a cell phone, allowing clinicians to quickly take a cervical image that can also be sent out for a second opinion. The technology, which was trialed at Penn and Scripps, is being used in developing countries that can’t afford a traditional $15,000 colposcope. It will be sold in the US once the company obtains FDA approval.

AMA’s VP of professional satisfaction says EHRs are the biggest driver of physician dissatisfaction. She cites studies that show doctors waste 80 percent of their time performing activities that don’t benefit patients, suggesting that they hire scribes.

A study of nephrology patients finds that patient portals are being used more widely but also more selectively, with less involvement by patients who are poor, black, and elderly.

Like that old Chicago song, nobody really knows what time it is in Turkey, whose government  decides to push back the end of daylight saving time until after upcoming elections. The government doesn’t control computers and smartphones, which change time automatically based on rules rather than last-minute political pronouncements, so everybody is confused. 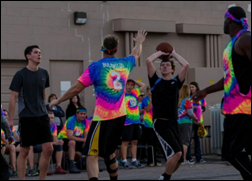 Centura Health SVP/CIO Dana Moore, whose ideas launched my DonorsChoose project during the last HIMSS conference, sent photos of the fundraising basketball game between the tie-dyed Centura team (which eventually won the game) and Epic. He said everybody had a great time and he’s sending me the $620 raised to fund more classroom projects, which will actually fulfill more grants when I apply the matching funds I have available. Good work by Centura, Epic, and Dana.