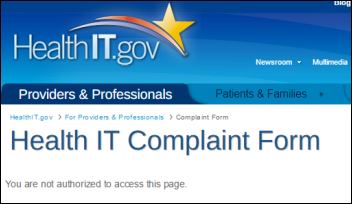 ONC launches a health IT complaints webpage for providers to report health IT concerns or challenges that they can’t resolve through other channels, including information blocking, EHR usability issues, or certified EHR products that aren’t performing as expected. ONC says it will triage, track, route, and respond to submissions, although it adds that “we may not always have the ability to step in and fix the problem.” Meanwhile, to whom should I complain about the error message I receive when trying to access the alleged complaints page?

The reason I set a $1,000 vendor minimum initially was because I was offering them an HIStalk plug for their donation and that seems worth a fair donation amount to a vendor. For companies or individuals who don’t need that exposure, you can donate whatever amount you like using the process above and I’ll take it from there. 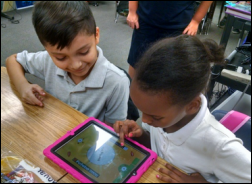 Speaking of DonorsChoose, Mrs. W reports from Las Vegas, “I cannot begin to explain what an impact the iPad case, iPad adapter, and Chromecast have made in my classroom! Since the day I received the package in the mail, the materials have been in the hands of students. The students love using apps to extend learning, we love watching academic content using the adapters on our projector, and we know our iPad is safe. These are such special tools that I will continue to use every day in my classroom. Thank you for making a difference and improving my classroom environment. I work so hard to provide the best education for my students, and this donation helps to make their classroom a fun and exciting place to learn!”

From The PACS Designer: “Re: Apple’s iPad Pro. Medical capabilities were demonstrated at Apple’s launch event. The iPad Pro has double the resolution of previous devices and also 3D.” Video of the announcement is here. I wouldn’t be a prospect for a “tablet” that weights 1.57 pounds and has a screen nearly as big as a laptop’s, especially when it costs $799 for just 32GB of storage. I could get two laptops for that price and have a terabyte hard drive, nice keyboard, and 8GB of memory (my Toshiba Satellite cost less than $400). Still, I’m sure the Apple fanboys will be waving their giant new toy conspicuously around at every opportunity. It’s fascinating to me that phones are now as big as tablets and tablets are now as big as laptops even thought portability was the genesis of all three. It will be interesting to see how the iPad Pro competes with Microsoft’s Surface Pro running Windows 10, especially since neither device seems to solve any particular problem or market deficiency except for people who desperately need an expensive, heavy, electronic version of a pencil and paper.

Seventy percent of poll respondents have designed or written clinical software, which I find commendable (since I’m one of the majority). New poll to your right or here: how much success will Salesforce have in healthcare?

An anonymous reader reported last week that Portland Adventist has experienced significant revenue cycle problems following their June go-live on Cerner. That’s not true, according to folks on site. Bills are processing, claims are being submitted, and nothing unusual is happening considering where they are in their conversion.

I filed an Office for Civil Rights complaint in early July after my hospital refused to give me an electronic copy of my medical record. I still haven’t heard anything from OCR or the hospital other than the auto-generated “we have received your submission” OCR message.

I’m not honored to be speaking at a conference, not thrilled to have been nominated for an award, not exhausted from a vacation to Bora Bora, and not grateful that some journal has published my article. We get it, Mr. Social Media humblebragger – you are way more wonderful than the rest of us. Meanwhile, I’m having fun unfollowing Twits who litter my feed with sports-related tweets, possibly unaware that I could just go to ESPN.com rather than follow healthcare IT people if I cared about tennis or college football updates.

September 22 (Tuesday) noon ET. “Just Step on the Scale: Measure Ongoing EHR Success and Focus Improvements Using Simple but Predictive Adoption Metrics.” Sponsored by The Breakaway Group. Presenters:  Heather Haugen, PhD, CEO and managing director, The Breakaway Group; Gene Thomas, VP/CIO, Memorial Hospital at Gulfport. Simple performance metrics such as those measuring end-user proficiency and clinical leadership engagement can accurately assess EHR adoption. This presentation will describe how Memorial Hospital at Gulfport used an EHR adoption assessment to quickly target priorities in gaining value from its large Cerner implementation, with real-life results proving the need for a disciplined approach to set and measure key success factors. Commit to taking that scary first step and step onto the scale, knowing that it will get measurably better every day.

September 22 (Tuesday) 5 p.m. ET. “Laying the Groundwork for an Effective CDS Strategy: Prepare for CMS’s Mandate for Advanced Imaging, Reduce Costs, and  Improve Care.” Sponsored by Stanson Health. Presenters: Scott Weingarten, MD, MPH, SVP and chief clinical transformation officer, Cedars-Sinai; Anne Wellington, VP of informatics, Stanson Health. Medicare will soon penalize physicians in specific settings who do not certify that they consulted "appropriate use" criteria before ordering advanced imaging services such as CT, MRI, nuclear medicine, and PET. This webinar will provide an overview of how this critical payment change is evolving, how it will likely be expanded, and how to begin preparations now. A key part of the CMS proposal is clinical decision support, which will help meet the new requirements while immediately unlocking EHR return on investment. Cedars-Sinai will discuss how they decreased inappropriate utilization of diagnostic tests and treatments, including imaging. 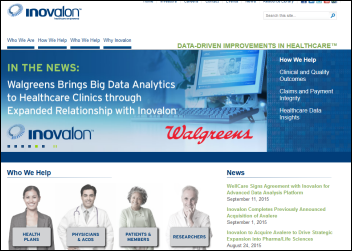 WellCare Health Plans will use analytics from Inovalon.

A study finds that longer, more complex passwords may actually be less secure than easier ones because users are likely to put them on sticky notes left lying around. It gives as an example a recent Super Bowl live TV camera shot that displayed the press-only Wi-Fi network credentials as jotted down by someone worried about forgetting them, allowing thousands of fans to jump on.

A New York Times article about family philanthropic foundations profiles the grandson of Meditech co-founder Morton Ruderman, who earns $225,000 per year to give away $10 million per year of the foundation’s $185 million in assets to recipients in the US and Israel while making sure not to run afoul of the IRS while disbursing the money to organizations that can have the desired social impact. Morton Ruderman (above), who died in 2011, was also involved in real estate development.

A federal judge declines to send a Chinese citizen and former NYU professor to prison for accepting a $4 million NIH grant that he used to patent his research findings on behalf of the China-based imaging company for which he was secretly working.

The Portland business paper profiles Michael Blum, MD, cardiologist and CMIO at UCSF Medical Center and his thoughts on the future of healthcare. He likes ever-shrinking sensors, analytics, treatment of addiction behaviors (including food), and DNA sequencing.

Weird News Andy will be sorry he didn’t get to the bottom of this gem of a story. A woman arrested on jewelry theft charges after surveillance video showed her swapping a fake diamond for the real one she then secretively swallowed produces the evidence when the six-carat, $278,000 diamond is removed via colonoscopy.