Google’s research division creates a prescription-only vital signs tracking wristband that will provide research-quality data for clinical trials. Testing of the device — which monitors heart rhythm, skin temperature, and environmental factors — will begin this summer and the company hopes to earn FDA approval. 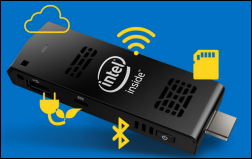 From The PACS Designer: “Re: USB computer. The Intel Compute Stick can be used anywhere with a wireless keyboard and could be used in wireless more via the HDTV USB port.” The $150 USB gadget turns an HDMI-ready TV or monitor into a computer, with the Atom-powered Windows 8.1 version including 2 GB of memory and 32 GB of storage. Intel suggests such use as digital signage, home entertainment, or as a thin client. User reviews on Amazon are mixed, mostly complaining about slow performance, iffy Wi-Fi, the single USB port, and the limited storage capacity. You could get a Chromebook, Android tablet, or almost a low-end laptop (certainly a refurb) for about the same money and then you’d have the keyboard, monitor, and USB ports.

From Graham: “Re: your comment about the healthcare status quo stifling innovation with political influence and financial clout. Regulatory capture will deepen for the next five years. It’s going to be a very rough ride, particularly in the USA where money is so influential in government. But eventually the stink will become too great for the treasure to ignore and change will happen.” My theory is that no matter what change begrudgingly occurs, the same companies and people will end up with all the money, just like that economic theory that you redistribute the wealth of the world’s 100 richest people and they would have it back within 10 years. That’s OK as long as overall healthcare cost and quality is improved – we’re wasting untold fortunes on US healthcare,  so at least we should perform better or spend less.

From James: “Re: Cache database. InterSystems claims it’s the fastest object database. I’d like to substantiate that claim by trying out their benchmark, but have made an inquiry with no response. Do your readers have insights?”

I always forgot to observe HIStalk’s birthday, which I believe was June 6. I started writing it in 2003, so that makes it 12 years old. 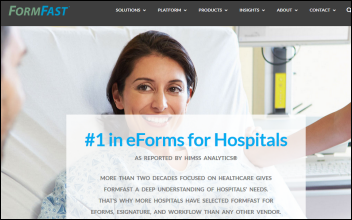 The folks at FormFast made a generous $1,000 donation to my DonorsChoose project, which was even more effective because of the matching funds provided by an anonymous health IT vendor executive (your company’s donation is welcome as well). I put the total $2,000 donation on the educational street quickly, as follows:

I’m running a summer special on both produced and promoted webinars since the industry is like a snoozing man in hammock for the next few weeks and I get antsy when it’s quiet. Sign up by July 31 and get a sizeable discount. Contact Lorre. We get good turnout — especially when companies take our advice about content, title, and presentation – and the ones we produce keep getting hundreds of views well after the fact from our YouTube channel. The record is held by the one Vince and Frank did on the Cerner takeover of Siemens, which has been viewed over 5,000 times.

Fantastically named Myelin Communications acquires Dodge Communications, which does quite a bit of public relations work for health IT vendors. That also pairs Dodge with an odd sibling – Duet Health, which sells patient engagement technology.

Accretive Health, which has been on a financial rollercoaster and executive merry-go-round since its strong-arm patient collection techniques got the attention of Minnesota’s attorney general in 2011, lost $80 million in 2014 as net services revenue dropped nearly 60 percent. 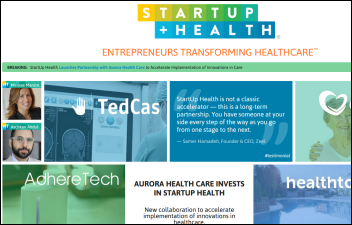 Heal, which desperately wants to be Uber in offering $99 doctor house calls in Los Angeles in San Francisco, raises $5 million in funding for expansion. The company uses technology such as AliveCor ECG, CellScope otoscope, and electronic medical records. 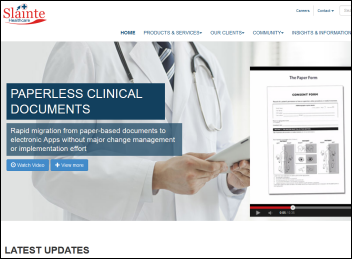 Dublin-based Beacon Hospital signs for Slainte Healthcare’s EHR, hoping to become Ireland’s first digital, paperless hospital. Hint: as in US “paperless” hospitals, the folks making the proclamation aren’t watching the pallets of paper coming in via the loading dock, the elimination of which would send the hospital into immediate chaos.

Staff scheduling system vendor OpenTempo names Andy Comeau (Cerner) as CEO, with former President, CEO, and Co-Founder Rich Miller moving to chief strategy officer. Andy’s LinkedIn profile has an artistic but news-worthless long shot of him standing unrecognizably in front of a mountain (which I’m using above anyway to make a point), so perhaps it’s a good time to recite the LinkedIn photo rules: (a) use a professional head shot only, not one cropped out of a frat party group photo or police lineup; (b) post the photo in large size and high resolution so that news sites can use it without excessive graininess – LinkedIn will automatically thumbnail it so that clicking brings up the high-res version; (c) don’t get artsy-craftsy with a picture taken at a weird angle, with head or chin cropped out, or with a mountain in the background. LinkedIn is for business and profiles should include an appropriate photo, although mine doesn’t because the LinkedIn police made me take by Carl Spackler photo down (kudos to them for recognizing it, though). 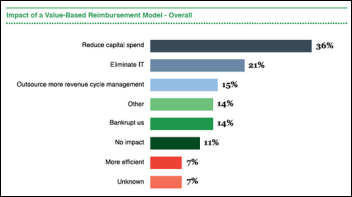 Peer60’s revenue cycle management report finds that CFOs are worried about value-based payment models and are anxious to reduce capital spending and IT costs. A pessimistic 14 percent of respondents say value-based payments will “bankrupt us,” while the roll-up-our-sleeves types are focusing on ICD-10 migration, improving the patient experience, and improving point-of-sale collection.

Nuance will include data analytics from Jvion in its Advance Practice Clinical Documentation Improvement to compare clinical documentation to payments and quality scores.

The Providence, RI newspaper observes that less than 15 percent of the state’s physicians use the state’s HIE, which cost $25 million in federal money plus the state’s cost. A representative from the state medical society says, “It will make docs’ lives easier eventually, but so far, it’s only made insurance companies and EHR companies happy.”

The American Society of Clinical Oncology publishes a formula to assess the cost vs. benefit of new cancer drugs, the first step in developing software that can be used by oncologists at the point of care. One drug that costs nearly $10,000 per month in generating $2.8 billion per year for its manufacturer scored a zero in net health benefit.

Weird News Andy says, “You CAN handle the truth” in describing the $13 bacteria-killing door handle invented by two Hong Kong high school students. WNA also proclaims “strangling her legs” in describing a case study of a woman with temporary leg nerve and tissue damage caused by squatting too much in her skinny jeans, which were so tight doctors had to cut them off.