Epic will launch App Exchange, which will publish Epic-compatible software developed by both customers and vendors, in the next few weeks. 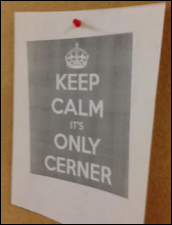 From Pima Pundit: “Re: Cerner. Saw this on the wall of a Carondelet Health Network office. They’re moving from Greenway Intergy to Cerner.”

From CC Ryder: “Re: Skycare. We implemented their EHR in 2014 to meet Meaningful Use requirements but found out today that the company has ceased operations. They told us that all employees were let go Friday and no further support is available. I’m the EHR champion at our small family practice and could use help understanding how to switch EHRs and any advice on what will happen for our 2015 attestation year.” I will forward information from anyone who can help.

I was helping a friend find a primary care provider for her new UnitedHealth insurance obtained via Healthcare gov. My suggestions, based on having worked in hospitals for nearly forever, was to look for a doctor with these criteria: (a) educated at a decent US-based medical school and reasonably good residency; (b) board certified in internal or family medicine; (c) graduated from medical school no more than 25 years ago since studies seem to show that mortality rates increase with each year after a doctor’s graduation. Extra points for good Healthgrades reviews and an affiliation with a good hospital. We called one doctor and group after another and the answer was always the same – not a single physician who met these criteria is accepting new patients. Nearly every available doctor graduated from a foreign medical school, while some were old enough to make you realize how hard it is to retire from primary care (one graduated from medical school in 1961, which must put him in his late 70s). UnitedHealth’s online provider directory incorrectly listed many doctors as accepting new patients when in fact they aren’t, making for a frustrating couple of hours of calls and web searches figuring out how to make undesirable compromises despite having a top-of-the-line medical plan. I’m beginning to realize that while it’s challenging to find and afford medical insurance, the battle isn’t won once you do.

Castlight Health reports Q4 results: revenue up 182 percent, adjusted EPS –$0.17 vs. –$1.79, beating estimates for both. Shares dropped 31 percent Thursday following an analyst’s downgrade, dropping the company’s market capitalization to $591 million. Above is the share price chart of CSLT since its March 2014 IPO (blue, down 84 percent) vs. the Dow (red, up 12 percent). 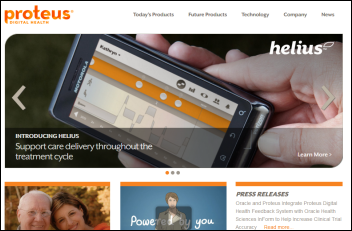 The Wall Street Journal names as one of its 73 startups valued at more than $1 billion Proteus Digital, whose smart prescription pills report back to doctors and drug companies when patients take their medicine.

Fortune places Cerner among its “World’s Most Admired Companies 2015.” 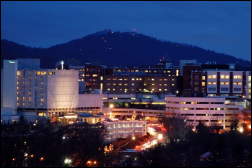 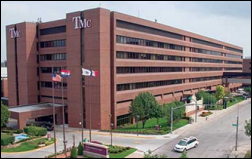 Oregon sues Oracle and seeks to permanently bar the company from doing business with the state, claiming Oracle reneged on its promise to continue running the state’s Medicaid enrollment system and instead plans to shut the system down at the end of February. Oracle says it made no such promise and the state should have developed a contingency plan, adding that Oregon defamed the company in saying its system isn’t working, then claiming that same system is essential. The state previously sued Oracle over its failed health insurance exchange. 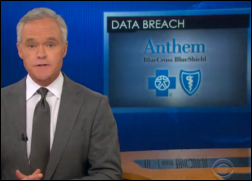 A “CBS Evening News” segment quotes a security expert who says, “Digitized health records are jet fuel for medical identity theft. The healthcare system built a digital record system without building the corresponding privacy-security safeguards.” It points out that HHS has audited only 115 of 700,000 healthcare providers.

NPR’s “All Things Considered” finds Medicare IDs being openly sold on the Internet, with a set of 10 costing $4,700. An expert says healthcare providers have grown to the point they often don’t even know how large their networks are, much less that those networks are secure. A comments says it’s surprising that many providers don’t realize that a Medicare number is just a Social Security number with the letter “A” at the end, while another says she opted out of her physician’s patient portal because the consent form said the company running it isn’t responsible for hacking or even if its own employees steal patient information. 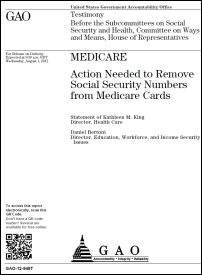 I Googled how Medicare numbers are created and the comment above is correct: CMS came up with the idea of placing SSNs on cards that 50 million people carry in their pockets, claiming that it would cost nearly a billion dollars to reprogram its systems to use a different ID. GAO wasn’t buying CMS’s excuses, saying it should have considered options to print only the last four SSN digits on the cards or to switch to barcodes or magnetic stripes.

Automated Assembly Corporation will market its InfoSkin near field communication (NFC) skin stickers to the healthcare industry. NFC allows a smartphone app to communicate with an inexpensive RFID-like tag over distances of a few inches, most commonly to make payments but with potential for identifying patients and communicating with implanted medical devices.

Chuck Feeney donates another $100 million to UCSF — part of the money earmarked for hospital construction and aging research — raising his total donations to the school to nearly $400 million. The 83-year-old billionaire philanthropist made his money running duty-free shops. Reports say he’s frugal: he doesn’t own a house, uses public transportation instead of owning a car, flies coach, and wears a $15 watch. His motto: “If you want to give it away, think about giving it away while you are alive because you’ll get a lot more satisfaction than if you wait until you’re dead. Besides, it’s a lot more fun.”

Rice University and the Baylor College of Medicine offer a free, four-week online course called “Medicine in the Digital Age” that begins on May 5.

A Forbes article about chief innovation officers says they have 16 months to shake things up radically or risk being fired, providing as an example an unnamed health system CINO who lasted less than three years because he played it safe by choosing board-pleasing, low-impact projects.