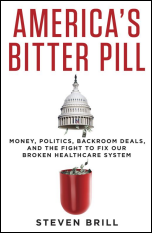 “America’s Bitter Pill” is not a feel-good book (pun intended). It’s not a fun read except for those folks who enjoy a maddening, blow-by-blow description of how legislative sausage is made. It tries to add drama and personal vignettes to events whose outcome is already known. Steven Brill tells us the obvious – the US healthcare system is a mess, the Affordable Care Act is a Band-Aid rather than major surgery, (and in fact made things worse in some ways), and there’s no resolution in sight.

The main message is that the Obama administration realized it had no chance of pushing through comprehensive healthcare reform given the presence of a strong healthcare lobby and rabid Republican opposition, so the ACA ended up being a Frankenstein law that was watered down with so many compromises that it did little except to expand the sales of medical insurance.

Political reality forced the administration to limit ACA to addressing coverage, not cost. Hospitals, drug companies, and device manufacturers stand to make even more money under ACA, which is why their powerful lobbyists – who practically sat at the table while the ACA was being negotiated – gave their required blessing.

Creating drama from politics requires characterizing people and organizations. President Obama is portrayed as well intentioned, but a bit detached and lazy in leaving the ACA details to others. White House staffers are seen as power-hungry and anxious to get Obama’s ear. CMS is a plodding, incompetent bureaucracy that vastly overestimated its ability to launch Healthcare.gov. Former US CTO Todd Park and HHS CTO Bryan Spivak are nice, geeky guys who weren’t invited to the Healthcare.gov table until it melted down. Insurance companies are low-margin businesses that are held hostage by greedy and ever-expanding hospitals that use their consumer brand identity to force high prices; insurance companies are also an easy but undeserving political target because that’s where the healthcare rubber meets the road for most consumers.

It’s interesting to read about how much influence data geeks have. An army of government number-crunchers has to to turn vaguely worded legalese into budget impact numbers that can make or break campaign promises, i.e. are new government ACA costs taxes or is the program budget neutral? Insurance companies have their own quant people whose insurance pool models determine their financial risk over many years. The stars of the book might just be the analysts whose numbers drove big political and business decisions.

The basis of Obamacare is the Romneycare three-legged stool: (a) a competitive insurance marketplace disentangled from employers; (b) a mandate that everyone buy medical insurance to avoid the self-selection in which healthy and young people opt out of subsidizing sicker and older ones by buying insurance; and (c) massive government welfare programs to help pay the medical insurance premiums for those who can’t afford them.

You can imagine the ugly details involved in rolling out this three-legged stool as a huge, complex law that even those legislators who passed it didn’t read in its entirety.

The book makes medical device makers as bad guys who escaped significant impact other than being charged a small medical device tax that they simply passed along to their customers. Their profit margins are extraordinary, their customers are hospitals who not only buy their products at high prices but then mark them up in selling them to patients, and they have positioned their products as a beacon of American medicine.

Drug manufacturers are bad guys, too, using their political influence to prevent importation of drugs from Canada (which like every other country, has much lower prices than here), to gain extended patent protection for biosimilar products, and to kill a provision that would have allowed Medicare to negotiate drug prices rather than paying made-up market prices.

Lobbyists had their fingers in the pie at every step, including those representing odd industries such as soft drink manufacturers, tanning bed groups, and ambulance services. Every member of Congress made sure to protect any back-home businesses that would have been negatively affected, including those that should have been targeted.

The author is sympathetic to physicians. He says Congress targeted them inappropriately in 1997 in its panic over rapidly increasing Medicare spending, implementing the Sustainable Growth Rate (SGR) payment cuts that have been overridden by Congress every year since. A fix was supposed to be in the ACA, but that, too didn’t make the final bill, and neither did tort reform.

CMS is characterized as just about as inept and bureaucratic as you would expect.They were afraid that Congress would de-fund some of their “offices” in their hatred of Obamacare, so they renamed them “centers” to make them an internal expense rather than a separately budgeted “office.” That bit of political sleight of hand came back to bite them, as the newly demoted “office” that was supposed to be overseeing Healthcare.gov was outranked by CMS’s procurement groups.

The result was a plodding bid process in which the same old government contractors made promises they couldn’t keep, with CMS deciding it would run the project internally. Literally nobody knew who was in charge – the author asked a bunch of people where the buck stopped and rarely got the same answer twice. Brill says the Beltway contractors “never met a botched product, cost overrun, or missed deadline they can’t pin on someone else.”

Still, the blow-by-blow on Healthcare.gov seems to be a distracting attempt at injecting drama and maybe selling a few more copies of the book. Government software failures, cozy contractor deals, and cost overruns are the rule more than the exception. The site was quickly implemented and horrendously complex, a massive integration effort involving other government systems run by the IRS, Homeland Security, and others. It failed, but it was fixed fairly quickly. Healthcare.gov is only a tiny part of the ACA. There were no particular lessons learned except perhaps that rushed, complex legislation that requires a rushed, complex technology solution is probably a bad idea all around.

Non-profit health systems are portrayed as somewhat well-intentioned monopolists unwilling to give up huge profits and executive salaries, using their hometown pride as big employers and their vague public threats of reduced quality from reduced payments to protect their huge incomes. The author mentions the complaints of the CEO of Montefiore Medical Center, who wailed about potential ACA-caused patient harm through lower margins just as the hospital turned a $197 million profit and that same CEO took home $4 million for the year. Brill talks about the cutthroat Pittsburgh market in which UPMC and Highmark hardballed each other and got into each other’s businesses trying to dominate the market.

Brill concludes that President Obama should be admired for pushing through broad healthcare reform even though he hadn’t expressed much interest as a candidate, but says that his failure to get involved with the details of ACA’s implementation will be be his unfortunate legacy. The backroom deals with profit-making entities ensured that the ACA fell far short of true reform and in fact will probably increase corporate profits as newly insured people consume their products and services as patients.

Brill says Obamacare won’t stand as a popular Democratic program such as Medicare and Social Security since it only helped the 20 percent of Americans without an insurance and another 10 percent or so who had been fooled into buying low-quality insurance whose benefits would run out after even a short hospitalization.

The end result is that most middle-class Americans continue to struggle to pay insurance premiums and inflated medical bills, the country still can’t afford the out-of-control medical spending that makes the US globally noncompetitive, and employers and hospitals got an easy out in blaming their ensuing self-serving actions on Obamacare.

Brill makes it clear that he would have preferred a single-payer health system, but he doesn’t notice the irony that in calling out CMS as inept bureaucrats, they run the closest thing we have to a single-payer system in the form of Medicare. He should have spent more time writing about that (and the VA’s government healthcare delivery system) than in trying to create TV moments in the form of Healthcare.gov war room arguments.

For all the problems recited, the book is short on solutions. Brill proposes:

Steven Brill knew little about healthcare when he wrote his Time article and this book. In that regard, he comes across as a curious layperson outraged by what he learns, but perhaps too easily swayed by people and policies that he has filed away as “good” or “bad” in his populist outrage.

The Affordable Care Act is a political lightning road and isn’t likely to be fine tuned by intelligent Congressional deliberation, so good or bad, it’s here to stay. Most of the people involved in creating it have already left government work and the Obama administration is counting down its remaining months. Meanwhile, the healthcare cash register keeps ringing for the same companies, organizations, politicians, and people who know how to make the system work for them. That’s what makes “America’s Bitter Pill’ unsatisfying as a reader – it’s unlikely that anything will really change as a result as healthcare costs continue to bankrupt individuals, companies, and the country itself.