CSC will pay $190 million and will restate previous years’ financial statements to settle a variety of SEC fraud charges that includes its participation in the UK’s NPfIT program. That’s a minor amount compared to the $2.75 billion the company already wrote off for its work on the failed NPfIT project. CSC will change its 2011 balance sheet to reflect a $1.16 billion impairment charge. 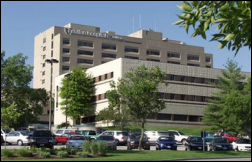 From Brandom: “Re: Barnes Jewish Christian. Rumor is it they will be installing Epic.” Unverified, but I ran a reader’s rumor saying the same thing on December 5. Often the earliest confirmation is a health system’s posting of a ton of open Epic positions, but BJC doesn’t have any of those on its recruitment site.

I have to disclose a brilliant idea I heard in listening to the rehearsal of the Versus webinar I mention below, which I honestly think is the most interesting webinar I’ve ever watched. John Olmstead of Community Munster captivated me all the way through on the hospital’s use of ED technology, but he really grabbed me at the end when he suggested technology tools he needs. His holy grail is a way-finding, GPS-type app that patients and visitors can use on their own devices to locate themselves precisely on a hospital floor plan, then receive directions to get them to a desired location. Example: I’m in room 4401 with my mom and I want to go to the cafeteria, then to the financial counselor, then to the gift shop, and then back to 4401, so give me turn-by-turn directions like I get with my car GPS. His take is interesting: patients will become so attached to hospitals that offer this app that they won’t consider going elsewhere, where they’ll go back to stumbling around lost or trying to follow decades-old red vs. green lines on the floor that lead to confusing elevators. Hospitals are always a poorly conceived patchwork of added-on construction that went up quickly as funding allowed, so visitors spend a lot of time wandering and wasting the time of employees who have to assist them. Turning that universally embarrassing situation into a competitive advantage is brilliant.

What’s really bugging me lately (it always has, but even more so now): companies that make portions of their name incorrectly upper or lower case, defying all of the civilized rules of spelling just because someone in marketing who’s never run a business has decided that being flagrantly incorrect is a desperate way to distinguish a company from its competitors. I’ve always refused to recognize all-caps vendor names like Meditech, Medseek, and Medhost, but I’ve also decided that I’m also no longer letting Athenahealth slide with the oh-so-cute small “a” at the beginning of the company’s name. Names in America start with a capitalized letter and then have all lower case letters following, so now I have to decide what to do with the many cutesy company names that stick capitalized letters midstream (even providers like Partners HealthCare mistakenly think that’s cool). I’ll even concede that HIStalk should really be Histalk if that will convince other companies to value conformity to accepted rules over marketing nonsense.

January 13 (Tuesday) 1:00 ET. “The Bug Stops Here: How Our Hospital Used its EHR and RTLS Systems to Contain a Deadly New Virus.” Sponsored by Versus Technology. Presenter: John Olmstead, RN, MBA, FACHE, director of surgical and emergency services, The Community Hospital, Munster, Indiana. Community Hospital was the first US hospital to treat a patient with MERS (Middle East Respiratory Syndrome). It used clinical data from its EHR and staff contact information from a real-time locating system to provide on-site CDC staff with the information they needed to contain the virus and to study how it spreads. Employees who were identified as being exposed were quickly tested, avoiding a hospital shutdown. 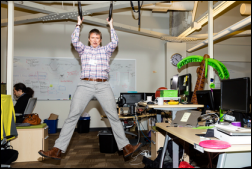 Fortune describes Athenahealth’s “More Disruption Please” conference as “the Animal House of corporate gatherings,” with the company’s 387-acre Maine resort hosting drinking games and an after-party cabin for investors and corporate hangers-on led by CEO Jonathan Bush, described as a “hyperactive, no-filter goofball of a chief executive.” The article contrasts the party atmosphere to skeptical investors who believe that Athenahealth shares are massively overvalued, especially since the company just announced that revenue growth has slowed as it continues to lose money. Bush says those naysayers don’t understand the company’s business model and will miss the building of a Salesforce-like technology company that will “create and curate the healthcare Internet.” Hedge fund manager and ATHN short-seller David Einhorn isn’t buying it (literally), saying, “They’re a niche provider way out on the periphery with a tiny market share. I don’t see how they’re going to become a backbone of anything.” My take is that Athenahealth would have been an obscure, offshore-powered medical paper pusher without the cult of Bush’s personality; investors had better hope he sticks around and keeps his mojo since that’s the only way shares can continue to trade independently of tepid company performance as a self-proclaimed Internet high flyer. The money gods would lose interest quickly if recommending or owning ATHN stock no longer paid the dues for being a member of JB’s frenetic fraternity.

Athenahealth shares (in blue above) did OK in the past year, falling a bit short of the Nasdaq’s 15.6 percent gain but 25 percent off their March 2014 highs. The company is valued at $5.6 billion on annual revenue of $711 million and a negative operating margin. Jonathan Bush hold shares worth $46 million.

The Forbes article on Athenahealth mentions that the company’s $1.1 million investment in Castlight Health was worth $75 million at the end of Q1, allowing Athenahealth to buy a private plane it calls “the Castlight jet.” At least Athenahealth ended up with something more high flying than CSLT shares — above is the CSLT price chart since its March IPO (blue, down 71 percent) vs. the Dow (up 12 percent). 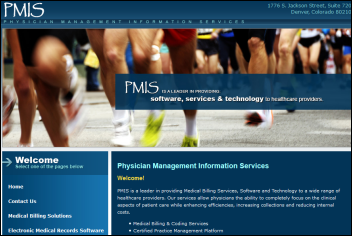 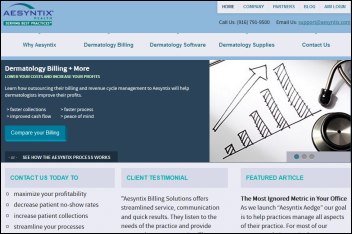 The federal government awards Accenture a five-year, $563 million contract to continue the work it started on Healthcare.gov after CGI Federal was fired.

Tom Palermo, a 41-year-old senior software engineer at The Johns Hopkins Hospital (MD), was killed in a bicycling accident Saturday. Memorial Mass will be celebrated Saturday in Towson, MD. 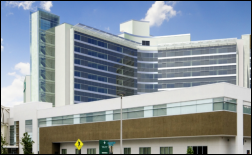 Lafayette General Medical Center (LA) donates a telemedicine station to a local elementary school, allowing ill students to be evaluated by a physician without leaving school. 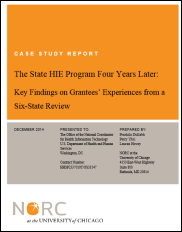 An ONC-commissioned report studying HIEs in six states finds that they commonly offer care summary exchange, lab results reporting and exchange, public health reporting, and ADT messaging, but otherwise their technologies and strategies vary. Lessons learned include setting attainable short-term goals to maintain stakeholder interest, recognizing that big health systems can be either supporters or competitors of grant-funded HIEs, and data standards are often voluntary but need to be standardized to achieve real interoperability. Five of the six states plan to charge subscription fees but haven’t set rates (the sixth HIE already shut down). The study found that Direct is still a confounder, with HIEs originally seeing it as a competing model but are now looking at Direct as an easier workaround to problems they found with query-based services, but Direct is still poorly integrated with EHRS (usually requiring providers to log in to a separate portal) since it wasn’t required of vendors until Meaningful Use Stage 2 and they’ve been slow to incorporate it. Wyoming’s HIE gets a special mention for shutting down immediately once its federal grant money ran out. The issue of sustainability is nicely summarized by this statement: “In the short term, grantees are trying to identify use cases that align with the market” (i.e., we built it and they didn’t come before the government money ran out, so it’s like being the owner of a tattoo shop when the local military base closes). 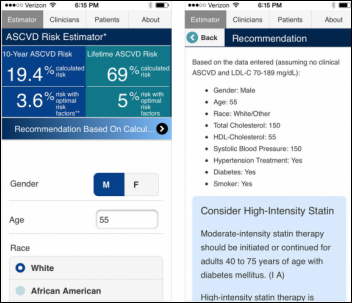 A German hacker replicates a politician’s biometric thumbprint using only a press conference photo and off-the-shelf software. The politician, ironically, was speaking at a hacker’s convention. The hacker, who’s apparently not a fan of biometric security, says he assumes that politicians will start wearing gloves when speaking in public.

Siemens has been caught countless times over at least 100 years for bribing people to earn government bids, so this is hardly news: Israel’s securities regulator arrests six electric company employees for accepting $20 million in Siemens bribes related to a power station turbine bid.

Geisinger Health System CEO Glenn Steele, Jr., MD, PhD, who is retiring next year, comments on physician complaints about health IT in a Modern Healthcare interview:

Here’s my Jonathan Gruber statement: This is an issue of stupidity. If people believe that you can put IT in, continue working the same way you did before IT, and not get inefficiency, we are talking double-digit IQs here. What everybody’s learned over the last 15 to 20 years is if you put IT in, whether it’s hospital-based or ambulatory, you have to look at the entire workflow and use the IT implementation as an excuse for re-engineering your workflow from beginning to end. If you don’t do that, it’s going to create havoc. You’ve got to look at your patient-care processes from beginning to end and say, “How are we going to do it differently? How is this going to make it better?”

On the benefits of health IT, we couldn’t do point-of-service care innovation without having near real-time data fed back to us. You’ve got to have data both from the insurer side and the provider side to predict which patients or cohorts of patients are most likely to need the highest-intensity vigilance. If you don’t have feedback in a timely fashion, it’s not going to work.

The president and CEO of Campbell Soup Company says she’s a fan of the quantified self movement, in which people will “[take] charge of their well-being through the use of data and digital sensors, wearable health bands, and smartphone apps that can track and quantify everything from their heart rate, blood pressure, and sleep quality to steps walked and calories consumed. The word ‘quantify’ is what’s really important because people will use the personal data and feedback from these devices to make healthier lifestyle choices and adjust the way they eat, exercise, work and rest.”

I’m not interested enough to look up the details, but somehow Cerner and Allscripts are both involved in a patent dispute with RLIS, which apparently took a stab at the EMR market in the late 1990s but then folded. I mentioned a reader’s report of the lawsuit in mid-2012, so apparently it’s still churning its way through the court system.

CDC declares the 2014-15 flu season as an epidemic, with 22 states reporting significant influenza-like activity vs. 13 last week. Flu vaccine doesn’t seem to be working well against this year’s strain.

This is sad: a hospital Santa of 30 years hangs up her red and white suit, saying the drug test, background check, fingerprinting, and HIPAA requirements make it too much trouble to give young inpatients their December dose of Christmas cheer. At least a new Santa is happy to take over the suit, which the former Santa donated.

Only in America, home of too many lawyers trying to drum up work and too many righteously indignant people convinced that everything that happens to them is an egregious injustice wrought by deep-pockets defendants: the family of  a woman killed when a driver allegedly high on nitrous oxide rear-ends her as she slows for a traffic light sues: (a) the driver, which makes sense; (b) Toyota, because the family claimed the victim’s car was defective; (c) the driver’s sister, a doctor the family claimed helped the woman get drugs; (d) the towing company who released the driver’s car to her; and (e) a local ambulance company, who the family says caused the crash by responding to an accident with flashing lights on, causing cars to pull over right before the crash.