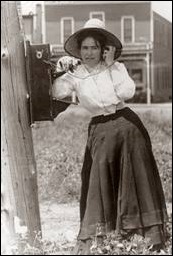 I usually start my day with a bagel and the local news, courtesy of a newspaper website. Once I catch up on homefront happenings (the comments are usually more entertaining than the articles they accompany) I hit a couple of national websites.

In the course of my usual surfing, I came across a link to “The End of Absence: Reclaiming What We’ve Lost in a World of Constant Connection.” I was able to find a couple of reviews and it looks like it will probably be one of my next reads.

Author Michael Harris looks at people born before 1985, namely because they “know what life is like both with the Internet and without.” For non-IT professionals and the general consumer base, I’d broaden that to include those that experienced life BC and AC: before computers and after.

I enjoy history, but never thought of myself as having lived through a major transformation. Don’t get me wrong — there have been many sociopolitical changes in the last few decades, but I missed out on the moon landing and other key “tech” touchstones.

I remember thinking some years ago about my great grandfather (who was born in the late 1800s and died in his 90s) and all he had seen in his life: from the Wright Brothers to the Concorde, and from Sputnik to space stations. He also saw the progression from the crank-powered phone to the cell phone and many other advances. At the time I thought of how cool that would be – to see that kind of change – and I also remember thinking that technology had come so far that I couldn’t fathom something that revolutionary.

Back then, broadband Internet was available, but it wasn’t a fixture in peoples’ daily lives like it is now. There was no Facebook, no Twitter, no cell phones in every person’s pocket. The iPod had barely been invented and it was for music only. We didn’t know we were on the cusp of an information revolution.

I was talking about this idea with a friend of mine over lunch yesterday. She has kids in middle and high school and was joking about the classic “back in my day, we rode dinosaurs to school uphill both ways” sayings she finds herself throwing at them. We talked about when we were exposed to our first computers (Commodore 64, anyone? TI-99? Apple II?) and what kids of today would think if they saw them in action compared to the smartphone firepower in everyone’s pockets. It used to be a major undertaking to put a computer lab in a school and now it’s expected.

Still, there are completely different sets of issues that today’s kids are dealing with involving technology and its appropriate use or lack thereof. At my friend’s local school, some teachers demand that students use technology in the classrooms and others ban it. I can only assume that the pre/post Internet generation gap might have something to do with it.

In thinking about my physicians who complain about the EHR, I don’t see a clear line age-wise. At least in our group, some of the older physicians tend to be more forgiving of the software’s shortcomings, perhaps because they expect less than the more tech-savvy physicians who tend to be younger. It would be interesting to do some actual research on their attitudes and opinions regarding technology in general as well as the EHR, but I’m not likely to find the time (or funding) to do something like that anytime soon.

One of the other concepts the book addresses is how people now use technology to quantify their self worth. I know the HIStalk team enjoys seeing how many Facebook friends, LinkedIn connections, and Twitter followers we have, but we don’t let it drive who we are.

I’ve seen multiple discussions on physician forums looking at teenagers who have significant psychological issues that stem from interactions with social media. One might infer that those of us in the “before” column had established our own sense of self independently of that kind of input, where those in the “after” column “lose the ability to decide for ourselves what we think about who we are,” according to the review’s interview with Harris.

I mentioned my own run-in with the “quantified self” after my running GPS was waterlogged. Being able to translate subjective experiences such as daily activities into actionable numbers is a powerful thing. It’s made a tremendous difference in my health and well-being, but I can see how data points might be overwhelming or discouraging to some. I can’t run a half marathon as fast as I could three years ago, but I can chalk that up to a bad knee and an uncooperative training schedule rather than letting it get me down.

Harris ends up taking a month off from the Internet while writing the book. Most of us could never do that for occupational reasons, but I like the idea of the challenge. As a physician, I frequently ask patients to limit “screen time” for their children. For many adults, it might be time to do the same. A quick search of ICD-10 codes fails to reveal much Internet-specific pathology, but we’ll have to see what ICD-11 brings.

Who’s with me for some time off the ‘net? Email me.