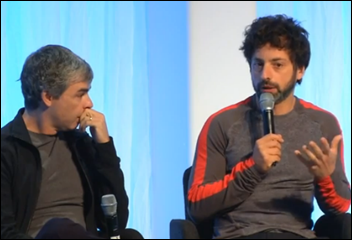 Google co-founders Sergey Brin and Larry Page (net worth: $31 billion each) don’t seem too excited about moving Google into healthcare (again) despite recent developments with Google Fit. Brin, responding to a question about the company’s experimental glucose-reading contact lenses, says, “Generally, health is just so heavily regulated. It’s just a painful business to be in. It’s just not necessarily how I want to spend my time. Even though we do have some health projects, and we’ll be doing that to a certain extent. But I think the regulatory burden in the US is so high that think it would dissuade a lot of entrepreneurs.” He’s probably talking specifically about FDA-approved medical devices, but that’s not clear. Page repeats his claim that data mining would save lives, although in this iteration he puts the number at 10,000 saved lives in the first year rather than the 100,000 he gave several times previously. You know healthcare is a mess when the guys who can take pictures of every street in the US and make self-driving cars can’t figure out how to crack the bureaucracy and special interests. On the other hand, their own efforts with Google Health and Google Flu Trends were pathetic, so maybe that just gives credence to the argument that it’s easy to criticize healthcare when you don’t know much about it.

From Fort Apache: “Re: Dim-Sum’s comments about DoD claims processing and Epic. Kaiser is implementing Epic’s Tapestry Claims Payment System (AP Claims) throughout the country for all of their business. Epic won’t need to find a third-party partner for the DoD bid.” Verified.

From SQSUX: “Re: Riverside, IL. I spoke to the lab director — they are moving to Epic and Beaker.” Unverified. I will note the apparent trend, however, that hospitals previously wary of Beaker’s readiness seem more inclined to replace incumbent their incumbent LISs, even best-of-breed ones, with Beaker given that it carries no additional license fee, it has a theoretical integration advantage (whether that’s real depends on who you ask), and gives the hospital a single vendor to contact for support. I doubt that implementing Beaker is ever the favorite option of the lab director, but he or she is often pressured by hospital administration to justify why Beaker isn’t “good enough” given the perceived advantages outside the lab. I’d be interested in hearing from a lab director who’s made the switch and what was gained and lost from the lab’s perspective since I know the issue is coming up a lot.

From The PACS Designer: “Re: Windows 9. ‘Threshold’ is the code name for the upcoming release of Windows 9 next year. Microsoft will be bringing back a new version of the their popular Start Menu that many currently miss in their present Windows version.” The hard drive of my main computer, an Asus desktop, failed last week. I found a suitable replacement desktop PC on clearance at Office Depot for around $400 that met my minimal specs (8GB memory, 1TB hard drive, USB 3.0). It had Windows 8.1 pre-loaded with a change that bypasses the Metro tile display as its default. My suggestion is to not obsess with the Windows 8.1 changes and don’t do something silly like wipe the drive and reinstall Windows 7 just to avoid learning something slightly new when most people only barely interact with the OS anyway. Everybody knows that every other version of Windows is crap and that’s been the case since the late 1990s, but at least this latest Windows 8 kludge upgrade fixes Microsoft’s colossal blunder in trying to force a tile-based mobile interface on the vast majority of computer users who don’t have (and don’t want) a touch screen for desktop use. My only hesitation was whether to buy a laptop or a desktop and I went with the latter – even though they are a dying breed, I like having lots of USB ports without needing a hub, easy dual-monitor support, and having all the wires under the desk instead of on top of it.

More than half of respondents to my poll would recommend the Epic-IBM EHR package to the Department of Defense. The skeptic in me wonders if the large number of participants suggests vendor vote-urging. New poll to your right (or here): does your PCP offer a patient portal and have you used it in the past six months?

Listening: new post-grunge from South Africa-based Seether, which has been rocking a Nirvana-ish sound since 2002.

A few readers reported seeing pop-up ads (some with audio) when visiting HIStalk-related sites, to which I always suggested running an antivirus/spyware scan since it wasn’t happening for me. I tracked it down – the company that provided the hit counter that displayed at the lower right of the page (the “8 million visits since June 20, 2003” text) had slipped in some sneaky ad software in Javascript that could hijack the page, so I replaced it. The page loads faster and the hijacking problem is fixed, with the only downside being that the new stats package I installed can’t display the cumulative total on the page.

Here’s an overview video of GE Healthcare IT that I found on YouTube. I think it’s the same one mentioned in their sponsor ad.

Orion Health is considering going public with an IPO on the New Zealand Stock Exchange, with an unnamed source suggesting a value of around $440 million US. 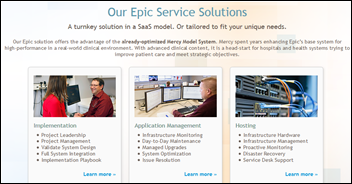 CaroMont Health (NC) contracts with Mercy Technology Services to implement its Epic system. MTS is the IT services division of Mercy, the 33-hospital Catholic system that is accredited as the first Epic Connect provider. The health system provides implementation, hosting, application management, consulting, and analytics. MTS also provides its model of Epic that includes its own customizations, or as it says, “Unlike Epic’s out-of-the-box base model, Mercy’s system contains years of enhancements driven by the physicians and nurses who use it.”

Amy Abernethy, MD, PhD (Duke Medicine) is named CMO/SVP Oncology of oncology data technology vendor Flatiron Health, which recently raised $130 million from Google Ventures. She is also on athenahealth’s board of directors and will retain a part-time oncology role at Duke. Amy is a regular HIStalk reader and we’ve decided that an interview might be fun. 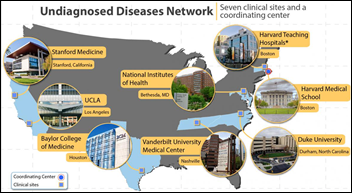 NIH awards a four-year, $43 million grant to form the NIH Undiagnosed Diseases Network, which will use genetic and clinical screening to focus on diseases that affect as few as 50 people in the entire world.

A Washington Post analysis finds that 90 percent of the emails intercepted by the National Security Agency came from ordinary US citizens rather than suspected terrorists, some of them including medical records emailed between family members. The agency’s tools can sniff data from all voice and data networks and can extract email information from Yahoo, Microsoft, Facebook, and Google, all without requiring a probable cause warrant. 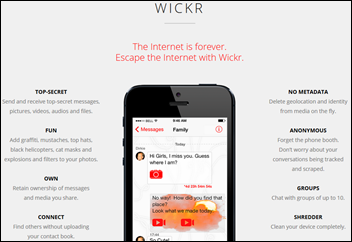 An Inc. article says that Facebook’s declining usage makes it a target for startup competitors that won’t sell the personal data of their users. According to one startup CEO, Facebook has three big problems: “The first one is privacy–you want to be able to communicate without having your communication monitored and monetized. The second is monopoly. You don’t have open competition; you have somebody who controls who wins and who loses and how much they charge for the service. There is no way a social network should be a monopoly–everybody suffers, from the vendors to the consumers. And that’s the third problem: It really stifles innovation." The article predicts replacement apps that allow users to control (and sell, if they want) their own information, declaring, “If this is the information age, then information has value. And if it has value, how come everybody has it but us?”  The parallels to healthcare data are significant. 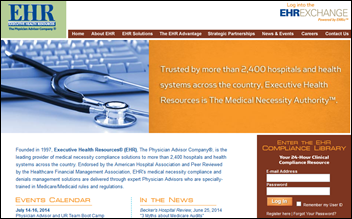 A New York Times article points out that insurance company UnitedHealth plays both sides of Medicare hospital payments as it pays hospitals less than they’d like via its Medicare Advantage plans but also charges hospitals via its Executive Health Resources subsidiary (acquired in 2010) to help them justify higher payments from Medicare.

Milwaukee Health Services (WI) receives a $190,000 city loan to upgrade its GE Healthcare EHR to earn Meaningful Use incentives. The community health center spent $3.1 million on its previous Pearl EHR from Atlanta-based Business Computer Applications, Inc., which it sued in a dispute over being locked out of its system over unpaid invoices. BCA, which did a lot of government work with CDC and NIH and sold EHR systems to prisons, was acquired in February 2014 by government contractor Acentia.

The Raleigh, NC newspaper covers local implementation of Epic at all three major systems:  UNC Healthcare, Duke University Health System, and WakeMed. It also mentions Epic-related billing problems at Cone Health and Wake Forest Baptist Medical Center, but WakeMed says its clean bill rates jumped from 80 percent to 96 percent after moving practices to Epic. Like most things in life, it’s not what you have but how you use it.

ICU telemedicine services are saving lives in war-torn Syria, where the both the government and rebel forces are accused of bombing hospitals that they claim are harboring opposing forces. The US-based Syrian American Medical Society (SAMS) started a telemedicine program last year to alleviate a shortage of doctors to care for ICU patients, most of them civilians injured by randomly dropped barrel bombs. Doctors from Canada, England, the US, and Saudi Arabia use Skype and webcams to oversee ICU patients and offer suggestions during surgeries. Syria previously had one of the Middle East’s best healthcare systems but has lost half of its doctors. Another 460 healthcare professionals have been killed in 156 hospital attacks, 90 percent of them carried out by government forces. 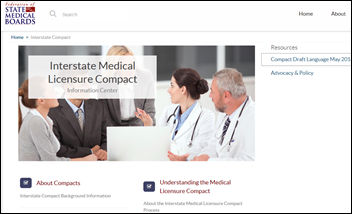 The Federation of State Medical Boards issues a telemedicine-focused model state policy that would make it easier for doctors to obtain licenses in multiple states. Expedited licensure would be available for certified specialists with no history of disciplinary problems. The patient’s location at the time of the encounter would determine which state’s medical regulations would apply. FSMB subject matter Alexis Gilroy, JD mentioned this change when I interviewed her in May. This is a great and potentially quickly implemented alternative to national licensure, allowing doctors to practice in multiple states (telemedicine, referrals from other locations) without having to apply for licensure state by state.

Weird News Andy calls out the sad story of a veteran who died waiting for an ambulance while he was inside a VA hospital. The man collapsed in the cafeteria of the Albuquerque VA hospital, but hospital policy required him to be transported by ambulance to its ED, just 500 yards from where he went down. Employees called 911 and performed CPR in the cafeteria during the 15-20 minute wait for the ambulance. The hospital is reviewing its policy, but despite the negative press, it’s pretty much standard in every hospital I’ve worked in. You can’t have ED people leaving the building (and their patients) to sprint down the sidewalk with a gurney. The article didn’t say whether those performing CPR were clinicians with code cart support, and if so, the outcome was probably predetermined regardless of location.