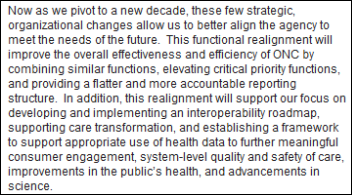 From Anonymous Tipster: “Re: ONC reorganization. Looks like the current leadership is basically staying in place. Flattening of the structure and some folks got big promotions. Rearranging deck chairs on the Titanic?” An internal email to ONC staffers from Karen DeSalvo announces that the following will serve as ONC’s leadership team along with Deputy National Coordinator Jacob Reider, MD:

It’s not uncommon for a new leader of an organization to restructure the org chart, so I don’t read too much into that. I do wonder with provider pushback on the fading Meaningful Use program whether ONC will retain its influence and keep all its people busy. Government agencies never just go away on their own – they always find ways to survive and try to keep their funding. ONC is part of HHS, which is swollen with so much bureaucracy that nobody’s going to notice ONC’s little corner of it, but other than cheerleading for EMRs, RECs, HIEs, and other big ideas whose funding (and thus interest) has expired, what will ONC’s couple of hundred employees work on?

From Anonymous Tipster: “Re: VA. My prediction: The VA and DoD will eventually decide to use a commercial vendor for a combined EHR (with a multi-billion dollar price tag) and Epic will ultimately win the bid. With the forgone conclusion of the Shinseki resignation now a reality, I am wondering if there are any implications for the VistA EHR system used by the VA. While the VA OIG report points to serious problems with the scheduling system, at last year’s summit of the Open Source Electronic Health Record Alliance (OSEHRA), Stephen W. Warren, executive in charge for information and technology at the VA, bragged about the scheduling system. The whistleblower in the case is pointing out some of these technology deficiencies and it seems that VistA could wind up being a tech fall guy for some of the VA’s problem. The VA inspector general has reported that an audit by an outside accounting firm revealed continuing problems protecting mission critical systems. Many of these problems rise from the fact that VA hasn’t instituted security standards on all its servers and systems. Remember back in 2009 when the VA canceled its patient scheduling system — dubbed the Replacement Scheduling Application Development Program — after spending $167 million over eight years and failing to deliver a usable product.” I agree that the VA scandal will blacken VistA’s eye along with the VA’s ability to run big software projects since people are starting to notice the VA’s scheduling history. On the other hand, DoD is a black hole of wasted taxpayer dollars. I think it’s safe to say that giving either agency a bunch of money for software in any form is likely to result in the usual budget overruns, missed dates, internal mismanagement, and a poor ROI when considering veteran/service member outcomes. Epic might be a safer choice, but those ever-present beltway bandits will figure out a way to make it less functional and more expensive. Regard Shinseki, I doubt he had any personal knowledge of the scheduling issues despite ample OIG warnings (which could also be said of the President) but clearly political pressure meant he had to go.

From The PACS Designer: “Re: Windows 8.1 for free. Microsoft has announced that it will offer tablet producers Windows 8.1 with Bing for free to ensure that it’s the platform sold to new customers. With Windows 9 coming next year, they’ll be able to get their next OS on these recently purchased tablets with an upgrade offer.” I would much rather get Android for free than Windows 8.1.

Respondents were split on whether the Meaningful Use slowdown is good or bad. New poll to your right: how do you see Meditech’s competitive position compared to a year ago? 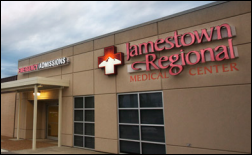 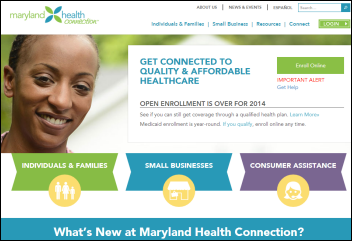 The State of Maryland says it will fund development of a replacement health insurance exchange using $40-50 million in leftover funds and Medicaid funding without tapping into federal money. The state will pay Deloitte to customize Connecticut’s exchange for its use. Maryland fired contractor Noridian Healthcare Solutions in February after the $170 million Maryland Health Connection failed immediately on its October 1 go-live. Some state legislators wonder why it doesn’t just use Healthcare.gov, with one saying, “What still is amazing to me is why they don’t go to the federal exchange, which is free and works. You still have to spend $40 to $50 million. It is still money they are spending on something they don’t have to.”

UPMC finally admits that that all of its 62,000 employees could be at risk for identity theft rather than the 27,000 it announced in April as unknown hackers breached its payroll system and used IDs to file 800 fraudulent tax returns.

A Kansas urologist who is also the president-elect of the Kansas Medical Society says his practice’s biggest problem is electronic medical records. “Now, we’re basically key-punch operators, transcriptionists having to input the data ourselves.  Voice-recognition software and some of those things help, but it has essentially tripled the time to complete a medical record. How do you accomplish that when we are already working 12 to 14 hours a day?” He says EMRs will shake out within 10 years, but doctors are quitting over them now. 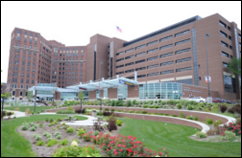 Hurley Medical Center (MI) accidentally discloses the Social Security numbers of several employees when someone accidentally attaches an employee worksheet to a mass email about insurance.