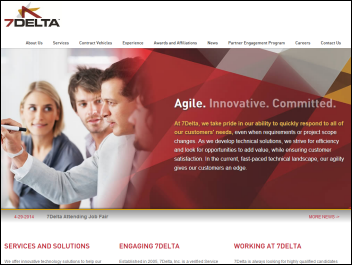 Defense contractor ManTech International will acquire 7Delta, which provides healthcare IT contracting to the VA, DoD, and HHS. ManTech wants a piece of the VA’s Transformation Twenty-One Total Technology program, for which 7Delta has won more task orders than any other vendor.

From Matthew Holt: “Re: HIMSS Analytics interview. Can the HIMSS PR people just stop with the BS? How many times do they have to say that they are a ‘cause-based, mission-based organization?’ This guy is selling market research to IT vendors and HIMSS non-vendor ‘members’ are all providers feeding at the federal teat. None of them are helping the starving in Africa. HIMSS has been on an acquisition tear in the conference and media business, including doing some extremely uncharitable activities towards its competitors there (not to mention the way they treat their vendor clients.) And Steve Lieber got paid $900K in 2011 and presumably over $1m by now. I’m a capitalist, I have no problem with anyone making money in healthcare while trying to change the world for the better, and I support the idea of more IT being a good thing. But seriously, who are they trying to fool with this rhetoric?” I seem to remember that HIMSS Analytics was originally set up as a for-profit subsidiary of HIMSS when it was first acquired many years, but something (presumably the IRS) forced a change. HIMSS is like hospitals: somehow it keeps minting more and more money and using it to buy for-profit companies (conference organizers and publishers, mostly) and then suddenly declaring them to be non-profit. The annual conference generates a ton of cash that can only go so many places: big salaries (check) and acquisitions (check). Or the less-obvious choice: HIMSS could scale its income to its expenses rather than vice-versa.

From Boy Wonder: “Re: Allscripts. The company sent an email to its portal users saying Medfusion caught the the company off guard with its announcement.” Medfusion announced this week that an unspecified payment dispute will force it to shut down access to its portal by Allscripts customers as of May 31, 2014 unless they sign a new contract directly with Medfusion. The Allscripts email reassures those users that they can be live on the Allscripts FollowMyHealth portal (the former Jardogs product it acquired in March 2013) by October 1 if they commit by May 31. The bottom line is that those 30,000 users have to make a commitment to one of the companies within four weeks, and if they choose Allscripts, they’ll have to try to strike their own deal with Medfusion to keep their portal running until they can make the switch. The Tullman-era Allscripts made a colossally bad decision to redistribute Medfusion’s portal instead of developing or acquiring its own, making both the company and its customers vulnerable to the actions of an external vendor. Allscripts predecessor Misys made a similarly bad decision in licensing a customer version of iMedica (now Aprima) that Allscripts resold as MyWay before retiring it and leaving those users in an equally unpalatable position through no fault of their own. In both cases, Allscripts gets a black eye for putting its customers in a jam and then trying to migrate them to another Allscripts product to fix it.

Dim-Sum provides the usual cryptic and amusing update of the Department of Defense’s commercial EHR system selection process, or as he or she describes, “Status and latest rumors in the halls of bedlam, located right K Street.” This is a huge many-billion dollar deal and the only insider reports I’ve seen are coming right here from Dim-Sum, so thanks for the update.

I hear through murky sources that a huge acquisition will be announced Friday morning (by “huge” I mean “you won’t believe it.”) I’m skeptical, but also receptive to being tipped off early if you are knowledgeable of the supposed deal. The fact that I’ve heard it only once suggests that my caution is well placed. 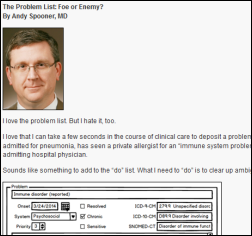 The latest “CMIO Rant” from Andy Spooner, MD is on HIStalk Practice where he addresses “The Problem List: Foe or Enemy?” complete with screen mockups. His first rant was “The Great Prescription Pad Race.”

Highlights from HIStalk Practice this week include: Medfusion parts ways with Allscripts over payment disputes. The EHRA opposes ONC’s proposed 2015 voluntary EHR certification criteria. A National Quality Forum panel finds pay-for-performance programs unintentionally worsen disparities between rich and poor. Forty percent of physician practices are looking to replace their EHRs, while those struggling to improve collections are taking on more aggressive billing strategies. Researchers find that almost one-third of patients fail to fill first-time prescriptions. 2014 MU incentive payments indicate a potential slow-down in EP participation. Thanks for reading. This week on HIStalk Connect: NIH announces a series of grants aimed at spurring mHealth research focused on chronic disease management, remote patient monitoring, and telemedicine. Doximity, often described as LinkedIn for doctors, announces a $54 million Series C round. Israeli startup Consumer Physics launches a Kickstarter campaign to fund a handheld digital spectrometer that it claims can scan food and calculate calorie and nutritional content. Dr. Travis discusses the 10-year horizon of connected health devices and the implications that they could one day have on healthcare overall. 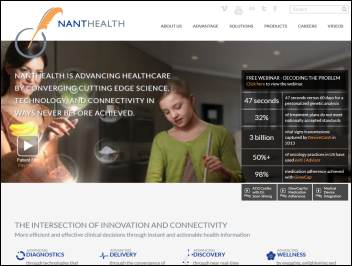 The Kuwait Investment Authority takes a $100 million position in Patrick Soon-Shiong’s NantHealth. I wasn’t paying attention to the company’s logo placement on the page above and thought that the female on the left was sporting a Hiawatha-like Native American headdress.

Streamline Health announces that its Q4 and FY2013 results will be delayed until the end of May as the company’s new auditors review its internal controls. The company says three unnamed go-lives will contribute recurring revenue beginning in Q2 and it booked a new sale for one of the products it obtained in its $6.5 million acquisition of Unibased Systems Architecture in February 2014. 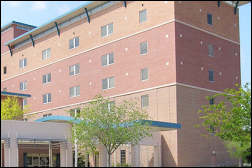 IBM names Keith Salzman, MD (CACI International) as CMIO for IBM Federal, which hopes to sell Watson and other technologies to the federal government for healthcare use.

John Thornbury, a highly awarded hospital IT leader in England, died on April 28.

We are live with @Cerner OneChart @StVincentsMC as of 4 AM. Patients are safe. Hospital and medical staff are amazing.

St. Vincent’s Medical Center (CT) goes live with Cerner, according to a tweet from the hospital’s CEO. 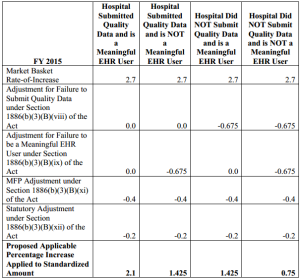 The VA says it will develop the next generation of its VistA EHR with the help of contests and challenges. Former VA guru Tom Munnecke is unimpressed: “It is not clear how the government owning all submissions in a contest will attract the best in the field. It is unlikely that many people would be interested in spending time and money to enter a contest where they give away their intellectual property.”

The Health IT Policy Committee will hold a May 7 public hearing in Washington, DC to review ONC’s certification process. It seeks input on allowing anyone to submit test cases so that certification measures real-world scenarios.

HHS didn’t want the Congress-mandated ICD-10 delay in the first place so it’s hardly shocking, but a proposed 1,700-page rule changing Medicare payments seems to confirm that ICD-10 will be implemented at the earliest date allowed by law – October 1, 2015. It could be that someone just updated the pre-delay document and forgot that Congress mandated only the earliest date, not the actual date – it’s only a proposed rule. The same document also spells “HIPAA” as “HIPPA,” so even the federal government gets confused.

Most physicians order unnecessary tests and procedures if their patients insist, but they also agree that ordering such tests and procedures is a big problem. They think doctors are better equipped to solve the problem (58 percent) than the government (15 percent), according to the telephone survey funded by the Robert Wood Johnson Foundation. 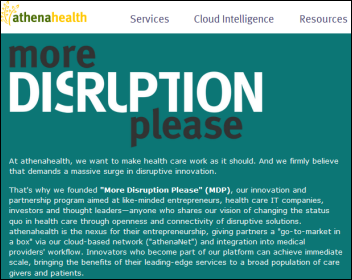 Our unique spin is that, because we take a percentage of net collection, we don’t actually partner with technology companies. We partner with outcomes companies like ourselves. So to be a part of the More Disruption Please program, we give our partner the scorecard, and that scorecard shows how they’re either driving more revenue to the doctors for doing the right things, or decreasing operational inefficiencies inside the providers’ workflow, or helping to improve patient and provider outcomes.

I’m always fascinated when family members riot and destroy hospital infrastructure after an unfortunate patient outcome (which doesn’t usually happen in the US, thankfully.) In Pakistan, a mob riots at a hospital, trashes the place, vandalizes cars in the parking lot, and beats up doctors and other employees after an appendectomy goes wrong and the patient ends up on a ventilator. Five days later, doctors haven’t declared the patient dead, and I wouldn’t either given the situation. 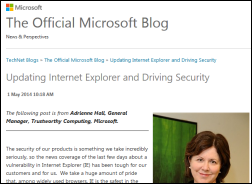 Microsoft gives in on its “no more updates for Windows XP” policy after the Department Homeland Security warns people to stop using Internet Explorer until the company fixes a security hole present in versions 6 through 11 that “could lead to complete compromise of the affected system.” The company says it will issue a one-time-only Windows XP auto-update to fix the vulnerability. 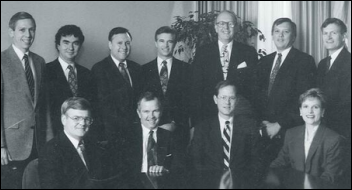 CHIME tweet out this photo of its 1994 Board of Trustees. Who can name them all?

Weird News Andy calls this story “Well Shut My Mouth.” Pediatrics nurses in a Saudi Arabian hospital are caught taping the mouths of babies shut to stop them from crying.

Mr. H already scooped me on this one, but the Federation of State Medical Boards (FSMB) recently adopted “Policy Guidelines for Safe Practice of Telemedicine.” My gut reaction is that this is just another way for licensing boards to extract more money from physicians by requiring additional licensure. My second response in actually reading the document (numbered line by line such that it reminded me of a deposition) is that there seems to be a whole lot of self-importance going on here. The seven-and-a-half page document has a Preamble, for goodness sake.

Physicians have been practicing by telephone and using secure messages for years, but apparently now we need to codify new standards just because there is technology involved. News flash: all the old standards (HIPAA, standard of care, ethics, etc.) already apply.

Some of the policy’s contents are very much common sense:

On a subsequent read, however, several other provisions caught my eye.

In this day and age with the mobility of our society, mobility of physicians, and the technology at hand, it seems more and more preposterous that individual states should continue to license physicians individually and/or without a greater degree of reciprocity. There are all kinds of problems with physicians being disciplined in one state and just going for a license in another state. Why not have a national licensure process? I suppose a counter argument would be that Medicare has a single provider identifier but still can’t correctly identify fraud, but that’s another story.

I really like their closing paragraph. Here’s a winner: “…physician remuneration or treatment recommendations should not be materially based on the delivery of patient-desired outcomes (i.e. a prescription or referral)…” Why should this be unique to telemedicine? Isn’t this something we grapple with on a daily basis, patients who come in wanting a script or referral they don’t need? What about those that want a test “because Medicare pays for it” whether they need it or not? Often our remuneration is ultimately based on whether we comply, either through patient satisfaction scores or the simple fact that they will vote with their feet. On the flip side, what about aesthetic medical services? Aren’t those ultimately driven by patient-desired outcomes? Especially ones like this recent find for aesthetic foot surgery.

On its face, this policy regulates us too much in regards to telemedicine, but perhaps I’ll go a little Jonathan Swift and suggest that maybe we’re not regulated enough in regards to everything else. It’s like saying we’re going to regulate wine in a box but not in a bottle. At this point, the policy is “advisory” so states can take it, leave it, or modify it.