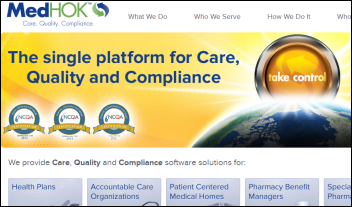 Press Ganey acquires On The Spot Systems, developer of a real-time data capture system for patient feedback, and launches Point of Care, a solution that allows providers to capture patient feedback via tablets and mobile devices.

The Guam Regional Medical City hospital will deploy Allscripts Sunrise EHR and Financial Manager platforms when it opens in late 2014.

T-System promotes Mark Horner from VP of client services to SVP/GM of RevCycle+ and  expands CFO Steve Armond’s duties to include leading the company’s documentation solutions. 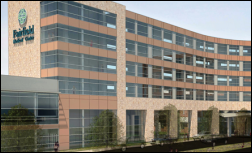 McKesson announces the general availability of its Paragon Ambulatory Care Practice Management solution, which is an extension of its single database HIS for inpatient facilities and designed for hospital-owned practices. I understand the PM module was developed internally, as opposed to a bolt-on of one of McKesson’s acquired products, and that an EHR module is also in the works. Sounds like McKesson is positioning itself to compete with Epic and Cerner in the IDN market.

The Office for Civil Rights proposes an amendment to the HIPAA privacy rule to allow certain entities to disclose the identities of individuals with mental health “prohibitor” status to the gun background check system. The change would apply to individuals who have been involuntarily committed to a mental institution; found incompetent to stand trial or not guilty by reason of insanity; or otherwise deemed by a lawful authority to be in danger of themselves.

CMS reports that more than 30,000 hospitals, physicians, and medical equipment providers are using its online esMD documentation system instead of mail or faxes for auditor medical record requests and prior authorizations requests for power mobility devices. 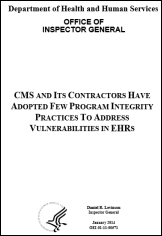 A new OIG report says CMS and its contractors haven’t done enough to address Medicare fraud related to EHRs. It recommends that CMS provide guidance to its contractors on detecting fraud and suggests they review provider EHR audit logs. The report identifies inappropriate EHR copy-pasting and creating of false documentation to support higher charges as key fraud issues. CMS responded by saying it will develop copy-paste guidance and identify best practices for its contractors to detect fraud associated with EHRs.

South Dakota philanthropist T. Denny Sanford donates $125 million to Sanford Health (SD) to support the incorporation of genomics into the health system’s primary care programs, including added genetic testing information to the EHR to allow clinicians to personalize drug therapies. Sanford has donated $1 billion to the health system that bears his name. 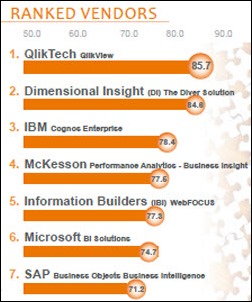 QlikTech’s QlikView earns the top spot among business intelligence products in a KLAS report on the healthcare analytics market.

According to a JAMA-published study, not too many physicians are joining Mr. H’s smoking doc for smoke breaks. Only about two percent of physicians admit to smoking, compared to 16 percent of the general population and 25 percent of licensed practical nurses.

A local paper profiles Whidbey General Hospital (WA), which experienced critical cash flow issues during its transition to Meditech. The hospital claims its billing process was abnormally slow after the system went live in May and caused A/R levels to climb and cash on hand to decline. The hospital, which expects to spend $7.5 million on its Meditech installation, is recovering. The paper incorrectly blames the ACA rather than than HITECH for requiring the use of EMR to avoid financial penalties.

A federal judge dismisses a patient’s lawsuit that charged a healthcare provider violated HIPAA laws when an employee’s laptop was stolen. The judge ruled that only HHS can enforce HIPAA and individuals do not have the right to bring lawsuits for its enforcement.

IBM’s “Jeopardy”-winning Watson computer is falling far short on the company’s revenue targets. Healthcare is its most promising market, but a $15 million M.D Anderson cancer genomics project is “in a ditch” according to the IBM executive in charge. A Watson oncology regimen project at Memorial-Sloan Kettering could go live later this year. IBM’s business plan calls for Watson to contribute $1 billion in annual revenue by 2018, but it has only generated $100 million in its three-year existence. The main problem is the effort required for engineers to program Watson for each business case so that it can learn from available information.

Massachusetts will launch the second phase of the Mass HIway HIE Wednesday at Beth Israel Deaconess Medical Center. The HIE  has received $55 million in federal funding.

E-Health Ontario, the provincial agency tasked with creating EHRs for all Ontarians, will share $2.3 million in performance bonuses across its 704 staff members. The payout follows a court settlement that restored payouts that were cancelled in 2011 as part of a controversial wage freeze.

John Lynn of EMR and HIPAA is producing an April 7-8 Las Vegas conference covering healthcare IT marketing and PR.

The governor of Minnesota blames IBM for problems with its state-run health insurance exchange that launched October 1. Minnesota Governor Mark Dayton sent a highly critical letter to CEO Ginny Rometty last month that blamed the company for a laundry list of items:

Your product has not delivered promised functionality and has seriously hindered Minnesotans’ abilities to purchase health insurance or apply for public health care programs through MNsure…. your product has significant defects, which have seriously harmed Minnesota consumers.