Two Kansas HIEs, one covering Kansas City and the other serving the rest of the state, risk losing their federal grant money if they can’t agree on data exchange terms by the state-imposed deadline of September 30 (already extended from July 30). LACIE and KHIN could be forced to shut down by the end of the year if they haven’t worked out their differences by then. KHIN doesn’t want the network to share data with insurance companies that aren’t KHIN members, while LACIE says the agreement would prohibit organizations that are connected to an ACO from accessing the network’s data. At issue is aggregated information that could be used for non-patient care purposes. The Kansas HIE board voted to shut itself down in September 2012 and let the Kansas Department of Health and Environment take over its duties, which means the state is in charge. Kansas has no secondary data use policy. 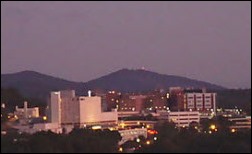 From Joyce: “Re: Mission Hospital, Asheville, NC. Laying off 70 workers, which is big news in a small town where healthcare supports the local economy.” The 730-bed hospital will cut the CEO’s salary by 26 percent, slash management salaries from 13 to 20 percent, eliminate merit increases, implement a three-month PTO freeze where time off is not accrued for worked hours, reduce its 403(b) matching, and reduce the employee wellness incentive. The hospital’s CEO made $480K in 2010, while the CIO was paid $349K. That’s the problem with hospitals – they provide growth to their local economy, but much of that is paid for by federal taxpayers in the form of unsustainably rising national healthcare costs. Building an economy based on healthcare won’t work, which politicians seem reluctant to admit since hospitals employ a lot of people and write nice political donation checks. 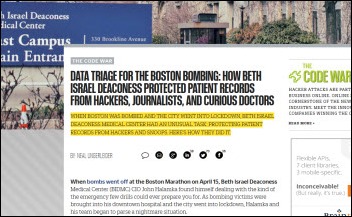 From Mennonite Rockstar: “Re: BIDMC IT security after the Boston bombing. I had the impression they rearranged the setup of their homegrown application’s security from reading the Fast Company article. Perhaps Mr. HIStalk can get Halamka to clarify?” John says that his IT shop made no changes to their applications, but did tweak their audit log reports to allow the hospital’s compliance department to monitor the specific situation.

Group purchasing organization Premier Inc., owned by 181 hospitals, health systems, and other healthcare organizations, files plans for an IPO of up to $100 million in common stock. Premier had $869 million in net revenue for the fiscal year that ended June 30, up 13 percent from the prior year.

Merge Healthcare Chairman Michael Ferro, Jr. resigns and is replaced by board member Dennis Bell. Ferro, Merge’s top shareholder, has indicated that he may eventually explore ways to boost shareholder value, including taking the company private. MRGE shares were unchanged on the news. 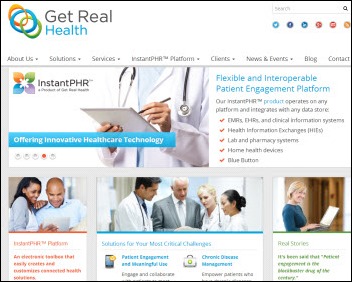 The strategic venture arm of Canada’s TELUS makes an unspecified investment in Rockville, MD-based Get Real Health, which offers the InstantPHR personal health record. Three of the company’s seven executives came from US Web, while two were Microsoft HealthVault developers.

Southern Prairie Community Care ACO (MN) will deploy technology from Sandlot Solutions to manage patient health information and give providers access to data  at the point of care.

Greenway Medical will develop an HIE for more than 500 physician members of the Denver-area Rose Medical Group, Rose Medical Center, and their patients. 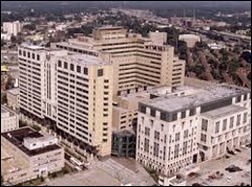 PinnacleHealth will use Care Team Connect’s integration and rules engine to integrate biometric data from Honeywell monitoring devices with other patient health data. 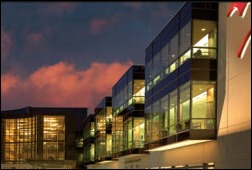 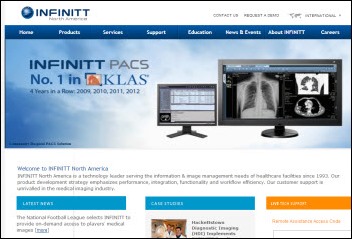 The National Football League signs a 10-year agreement for the ININITT Smart-NET PACS, which will allow the medical images of players to be viewed remotely or from mobile devices on the sidelines.

Emdeon launches a self-service testing exchange solution for ICD-10, allowing providers and channel partners to submit ICD-10 test claims and receive claim status feedback. The Emdeon Testing Exchange for ICD-10, which Emdeon purports is the first of its kind in the industry, requires no additional software and is a free service to Emdeon providers, channel partners, and payer customers. Sounds like a great service that would be even more valuable if more payers were ready and if providers already had ICD-10-ready software updates from their vendors. 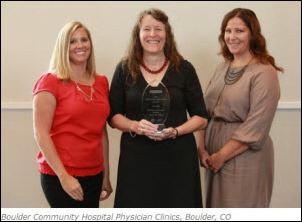 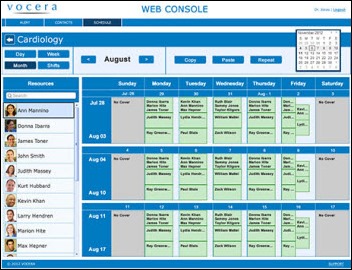 I came across this tweet today. Ah, athenahealth, I don’t think you can convince me that switching EHRs is as easy as switching from Time Warner to AT&T U-verse. 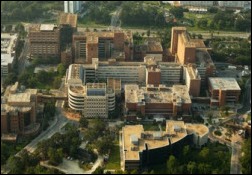 University of Florida researchers are developing a scoring model that will use hospital EHR information to identify inpatients most likely to experience an adverse drug event, allowing those patients to be more aggressively monitored. The result will be rolled out to 13 hospitals for validation in the study’s second year. 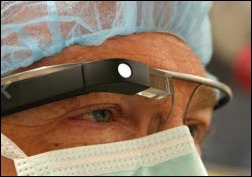 An Ohio surgeon wearing Google Glass during a surgery broadcasts the procedure over the campus network, also using it to consult with a colleague.

Apple is rumored to be planning a trade-in program for iPhones in an attempt to increase the percentage of units it sells directly. What Apple is really trying to do is get  more people like me to walk into their retail stores and spontaneously drop $50 on the latest, greatest cool Apple accessory. The speculation is that Apple will tie the trade-in value to the cost of an upgraded iPhone and offer an amount less than the open market value or what third-party companies like Gazelle would pay. I’m not due for a discounted upgrade any time soon, but my 16GB iPhone 5 is almost filled up. Maybe I’ll be one of the nerdy folks queuing up in line at the Apple store the first day the newest iPhone is released, supposedly in late September. 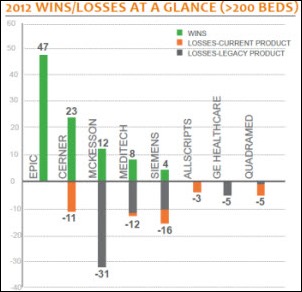 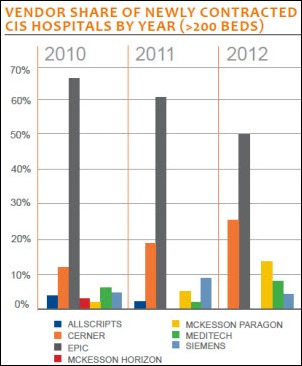 Cerner and Epic are winning three-fourths of all new large-hospital EMR deals, according to a new KLAS report on clinical market share. Cerner and Epic dominate in community hospitals, though McKesson Paragon and Meditech are gaining some traction. Biggest net customer losers for 2012 were McKesson and Siemens, while Epic was the only vendor that didn’t lose any customers. Allscripts, GE Healthcare, and QuadraMed had no wins at all.

HIMSS opens registration for its annual conference February 23-27 in Orlando. Aetna CEO Mark Bertolini will deliver the keynote address bright and early Monday, while Wednesday afternoon’s keynote speaker is still TBA. The Thursday afternoon keynote is “world class blind adventurer” Erik Weihenmayer, who unfortunately may not be enough of a draw to prevent weary crowds from making a mass exodus Thursday morning.

A California Nurses Association press release claims that Sutter Health’s Epic system went down Monday at its Northern California hospitals following an eight-hour upgrade-related downtime on Friday. A union spokesperson was quoted as saying, “This incident is especially worrisome. It is a reminder of the false promise of information technology in medical care. No access to medication orders, patient allergies and other information puts patients at serious risk. These systems should never be relied upon for protecting patients or assuring the delivery of the safest care.” While the union did not issue an equally passionate press release extolling the virtues of paper charts, it did throw in unrelated shots at management for urging nurses to enter patient charges correctly, apparently preferring that Sutter not bill what it’s owed even though those funds allow it to generously pay unionized nurses. 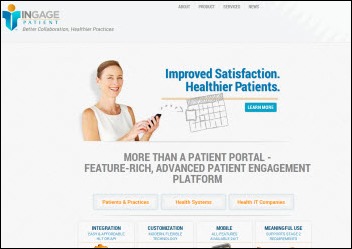 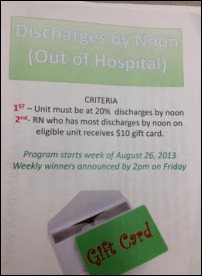 This photo by @Nurse_Rachel_ is surely embarrassing Sinai Hospital of Baltimore as it lights up Twitter. Nobody should be surprised that hospitals and doctors do whatever pays them the most; to expect otherwise is naive.

Weird News Andy says, “Nurse, doctor, what’s the difference?” A draft VA policy would eliminate the requirement that advanced practice nurses, including nurse anesthetists, be supervised by physicians. Take a wild guess at how the American Society of Anesthesiologists feels about that.

WNA also notes an AARP report warning  that 20 years from now, aging baby boomers won’t have enough family members to take care of them because of increased longevity, fewer children, and a high divorce rate. Family care is worth an unpaid $450 billion per year

Technical problems with the site Sunday and early Monday forced me (for reasons too hard to explain) to remove Vince’s HIS-tory of Cerner in the Monday Morning Update and simply link to it instead. Here it is again. Meanwhile, the site is now running on a supercharged new server that will better handle the readership growth. I’ll probably appreciate that more after I’ve caught up for all the sleep I lost over the weekend as the web hosting people fixed the inevitable problems.