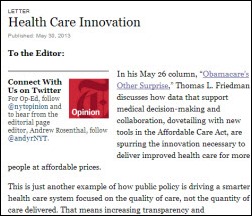 A letter to the editor in The New York Times by National Coordinator Farzad Mostashari says public policy is making the healthcare system smarter, citing the recently announced figures that half of practicing physicians and 80 percent of hospitals are using EHRs.

Some HIStalk Practice highlights from the last week or so: WNA makes a rare HIStalk Practice appearance to comment on a physician who has quit taking insurance. Physician satisfaction with their EHR vendors has declined over the last year. Almost one-third of physicians buying EHRs today are replacing legacy EHRs. Physicians fear that declining reimbursements, rising costs, and ACA-related requirements will threaten practice profitability. Athenahealth recognizes Midland Orthopaedics with its athenaVision award. Most nurse practitioners believe a practice led by an NP should be certified as a PCMH, but most physicians disagree. Dr. Gregg posts a letter to Allscripts. Thanks for reading.

We’ve had some interesting posts on HIStalk Connect lately, so you might want to sign up for e-mail updates if you follow mHealth, innovative technology, and startups. Lt. Dan also does a Friday weekly news recap there that provides a great summary. Some recent articles: 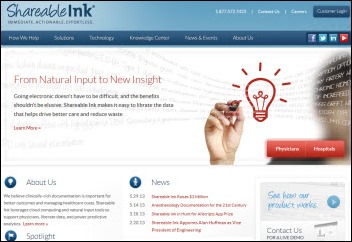 Shareable Ink raises an additional $3 million, bringing its total funding in the last three years to over $14 million. 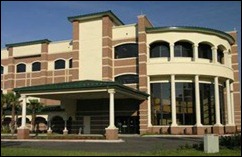 AirStrip names OptumInsight CEO Bill Miller to its board.

Explorys appoints Cleveland Clinic CFO Steve Glass to its board. 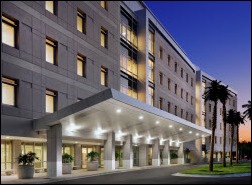 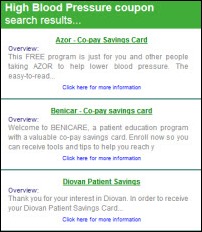 Nuance publicly confirms for the first time that its speech recognition technology powers Apple’s Siri, with CEO Paul Ricci stating at a conference, “We are the fundamental provider of voice recognition for Apple.”

In England,NHS chooses BJSS and Valtech as finalists to develop an electronic referrals service to replace Cerner’s system. 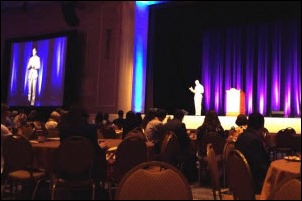 The MUSE conference is underway this week in National Harbor, MD, wrapping up Friday. The photo above of Farzad Mostashari delivering the keynote was posted to Twitter by Dan McQueen. 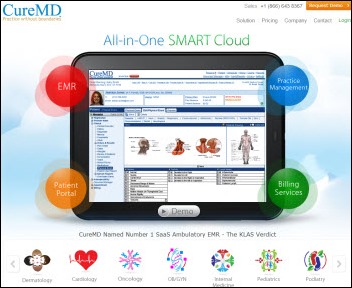 CureMD will demonstrate a new chemotherapy administration module of its oncology EHR that it says took five years to develop next week at the American Society of Clinical Oncologists conference in Chicago. 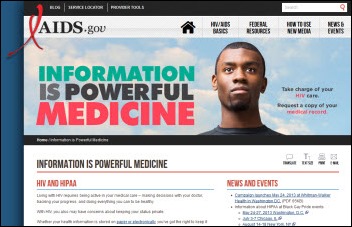 A group of Senate Republicans calls for an independent investigation of HHS Secretary Kathleen Sebelius, claiming that her fundraising efforts for Enroll America, a non-profit that promotes the Affordable Care Act, is inappropriate and possibly illegal in appearing to solicit donations from industries she is responsible for regulating. 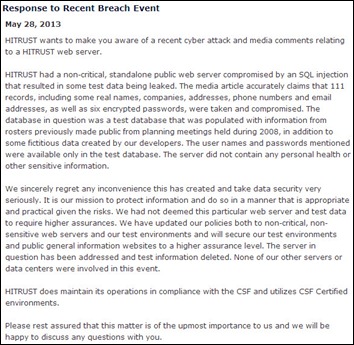 Bon Secours Hampton Roads Health System notifies 5,000 patients of a potential EHR security breach after discovering that two clinicians had accessed patients’ medical records “in a manner that was inconsistent with their job functions and hospital procedures.” The hospital has terminated the pair and is offering affected patients free credit monitoring services.

In England, Royal Berkshire Hospital says its problem-plagued Cerner Millennium EPR forced it to write down $23 million. According to the hospital’s CEO, “Unfortunately, implementing the EPR system has at times been a difficult process and we acknowledge that we did not fully appreciate the challenges and resources required in a number of areas.”

Australian researchers review the use of CSC and Cerner CPOE systems in a small-scale study that suggests systems with more drop-down menus may increase error risk.

EMR reminders driven by a connection to New York City’s vaccine registry increased children’s flu vaccine rates by 9 percent, and when physicians chose not to order the vaccine, they documented the reason 98 percent of the time. The results were presented at a pediatrics conference earlier this month.

Despite performance challenges with Meditech 6.0, 95 percent of the company’s customers surveyed by KLAS say Meditech is part of their long-term plans, citing affordability and usability. 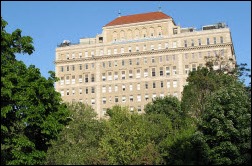 A New York Times article says Beth Israel Medical Center (NY) allowed an elderly heiress worth $300 million to occupy one of its rooms for the last 20 years of her life, but launched “an all-out fundraising campaign” in having executives hang around her room to hit her up for donations and drop hints about making a will. The CEO’s mother even watched a Smurfs video with her hoping to get on her good side.

Weird News Andy titles this story Step 1: Insert Pencil. A German man complaining of headaches and a runny nose is found to have a four-inch pencil embedded in his head, lodged there 15 years previously in a childhood accident.

The HIMSS14 Call for Proposals ends next week. It’s hard to submit timely topics nearly a year in advance, but if you’re like those of us in the nonprofit trenches, it may be the only way to have a trip to HIMSS approved. You wouldn’t want to miss an opportunity to attend HIStalkapalooza, would you?

Speaking of educational opportunities, CMS offers a National Provider Call on June 5 to help providers get started with PQRS and the Value-Based Payment Modifier programs. CMS experts will also be available after the presentation to answer questions. 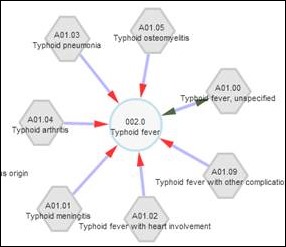 The University of Illinois at Chicago creates an ICD-9 to ICD-10 website. Maybe I have a warped sense of fun, but I enjoyed fiddling with it, and the results make for some frightening diagrams to spice up ICD-10 presentations.

A friend of mine e-mailed this blog by Reid Blackwelder MD, president-elect of the American Academy of Family Physicians. He tells the tale of a neighbor who fell and was taken to the ER where he was possibly misdiagnosed and discharged, then had to return for more extensive testing and a final diagnosis. Along the way, key clinical signs (like his inability to walk) were missed. Treating the numbers (test/lab/film) rather than the patient has become epidemic in the US. Is it defensive medicine, time pressure, the influence of Big Data, or simple lack of caring? I don’t know the answer, but we have to figure out a way to do better.

The article came at the same time that I was having a heated e-mail exchange with an IT colleague about whether we should push our vendor to incorporate genomics content in the EHR. I find it difficult to think that the average physician is going to be able to understand and act on genomic data when our healthcare delivery system so stressed that stories like Dr. Blackwelder’s exist. Of course that’s assuming we figure out a way to pay for gene sequencing and the subsequent treatments suggested by the data, which was the source of the original heated exchange.