Secretary of Defense Chuck Hagel tells the DoD that he supports the use of commercial software to replace the department’s AHLTA EHR rather than switching to the VA’s VistA platform as he previously hinted was his preference. The DoD says it has identified 20 commercial software vendors capable of meeting its EHR needs. You’d have to bet on Epic given that it’s outselling everybody in big hospitals, they were allegedly the DoD frontrunner in 2010, and the Wisconsin Congressional delegation was squeezing the federal government to choose Epic awhile back (and not to mention that there are nowhere near 20 serious players to choose from.) On the other hand, DoD loves throwing billions at the fat cat contractors and Epic might not want to work through them.

From Lil Wayne: “Re: Practice Fusion. Does anyone buy into their claim of having 30 percent of the primary care market? Seems beyond ludicrous.” I’m always curious about their methodology for counting actual users vs. someone who signs up with minimal usage. I would also be interested in seeing audited user statistics. Practice Fusion isn’t in the top five vendors by Meaningful Use attestation as I recall, in the low single digit percentages of all attesting providers.

From Stephanie: “Re: certification. If I already have a certified completed EHR and use another vendor’s patient portal within the HIE, does my patient portal also need to be certified? I’m just placing patient documents out in the portal for patients to view.” I know Frank Poggio will answer if nobody else does.

From Sleepless Fax Server Administrator: “Re: HITECH modifications to HIPAA. Will add risk to faxing or mailing results. There is a 100 percent chance of a violation when a provider changes practices since no healthcare IT system can determine the right address or fax number based on the date the patient was seen – they always use the current information. Even if you solved that problem, how would any system know if the patient followed the provider to the new practice? Also, critical radiology results are required by regulation to be faxed within 24 hours.”

From Major Tom: “Re: conference. Thought you would enjoy this e-mail.” A promoter pitches their conference as offering “peer-to-beer” knowledge exchange, creating mental images of sullen, bar-perched attendees mumbling into their mugs.

From Non-Sequitur: “Re: RAC recoveries hit $1.37 billion. Forwarding a synopsis from Wolters Kluwer. You are still the brightest spot in many of my mornings!” Thanks, milady, that’s sweet of you to say. The article says RACs collected $1.371 billion in Medicare overpayments and returned $65.4 million in underpayments in the first six months of FY2013 (obviously like with the IRS, your odds of an unexpected refund aren’t so good when the RACs come knocking). The current major issue is documentation for cardiovascular procedures.

Listening: Superchunk, possibly the best and most prolific indie band in history. I’ve played all 15 of their albums on Spotify and it’s a stunning body of influential work spanning almost 25 years. A new album will be out in August and a tour follows. 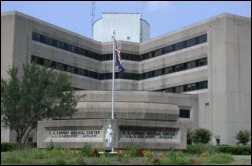 The New Jersey chapter of Entrepreneurs’ Organization and the Star-Ledger/NJ.com name SRS CEO Evan Steele the winner of the Garden State Entrepreneur Excellence Award in the $10M+ category.

Yousuf Ahmad, who will take over as CEO of Mercy Hospital (OH), is profiled in the local business paper because of an earlier position as CIO of Mercy Health Partners. Interestingly, he attended University of London on a cricket scholarship, graduated at 19, and is ranked among the world’s 400 best Scrabble players.

All of Maine’s 38 acute-care hospitals and 376 ambulatory provider sites have agreed to participate in the state’s HIE, operated by HealthInfoNet.

Idaho State University will pay $400,000 to settle alleged HIPAA violations stemming from a breach of unsecured data on 17,500 patients from an ISU family medicine clinic. The university notified HHS of the breach upon realizing that a disabled firewall had left patient data unsecured for at least 10 months. 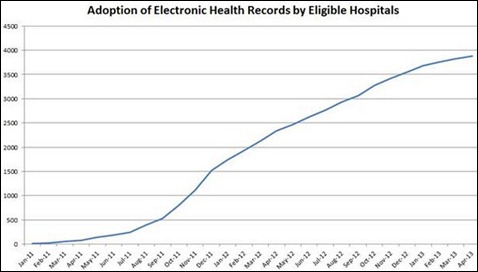 North Carolina’s state auditor finds that the state’s DHHS hasn’t overseen the implementation of its new $484 million Medicaid claims system properly, making it likely it will not be ready by the scheduled go-live in 40 days. CSC developed the system, which was written in COBOL by programmers from India copying code the company developed for a similar system in New York, and previous audits found poor documentation and unauthorized changes. DHHS allowed CSC to develop the acceptance criteria for its own project. The system was supposed to go live in August 2011 at a cost of $265 million. The state had already cancelled a 2003 contract with ACS saying their system wasn’t working before hiring CSC. Residents of other states are on the hook since the federal government is covering  90 percent of the development costs and at least 50 percent of the ongoing operational costs. Nothing good has ever come from combining state and federal governments, taxpayer money, contractors, and ambitious computer system plans.

Intermountain Healthcare announces a system that will track cumulative radiation exposure from higher-dose imaging exams and report it via the EMR.

The County of Monroe Industrial Development Agency (NY) approves $369,359 in tax exemptions for eHealth Technologies, which is building a $4 million, 36,000 square-foot facility and is planning to add 60 jobs over the next three years.

Via Christi Health (KS) blames lower than anticipated revenues for its decision to lay off up to 400 staff members — about four percent of its workforce — across the state by the end of June.

Conservative columnist Michelle Malkin, known for writing screamingly partisan books such as Culture of Corruption: Obama and His Team of Tax Cheats, Crooks, and Cronies sets her sights for the second time on Epic’s Judy Faulkner in an article titled “The Obama crony in charge of your medical records.” She also weighs in that HITECH is “government malpractice at work;” calls out Epic and not its competitors for having “enhanced power to consolidate and control Americans’ private health information” (missing the point that only Cerner runs a profitable business unit that sells de-identified data from the hospital systems it hosts); and accuses the President of choosing Faulkner as the vendor representative on the HIT Policy Committee because of partisan politics (“the foxes are guarding the Obamacare henhouse.”) It’s a safe bet due to partisanship on both ends of the political spectrum that anyone who follows her faithfully believes every word, and anyone who doesn’t wouldn’t believe even one.

In Detroit, Henry Ford and Beaumont call off their merger plans, with the unstated sticking points apparently being cultural differences, disagreements over keeping both academic medical centers, and the unwillingness of Beaumont’s independent physicians to work with Henry Ford’s management.

All you need to know about the inevitable demise of most HIEs once the government grant trough has been lapped dry is contained in this story. The squabbling CEOs of two Kansas HIEs  force the state’s lame duck HIE regulatory body to pass a resolution preventing them from trying to charge each other connection fees. KHIN and LACIE are required to connect their networks by July, but KHIN demanded that LACIE pay it a fee. The date has been moved back to December, and meanwhile the regulatory board – KHIE – will turn over its responsibilities to the state’s Department of Health and Environment on July 1 in a cost-cutting move. The dialog from the May 9 meeting:

[KHIN CEO] "If we give that data to another (network) they will have a competitive advantage, if we give it to them for free. We know that LACIE knows this — they’ve been out talking to providers all across the state of Kansas saying ‘If you join LACIE you can join at a lower fee, and you’ll get all of KHIN’s data for free.”

A University of Florida study finds that ED employees spend 12 minutes per hour on Facebook, and strangely enough their usage increases with ED patient volume and severity. On the other hand, it was a one-hospital study covering a 15-day period in late 2009 covering mostly the time between Christmas and New Year’s, so the method isn’t convincing.

A Pennsylvania judge orders the hiring of a forensic examiner to review the Facebook page of a woman who claims she slipped and fell due to a puddle of liquid on the floor of Lancaster Regional Medical Center. The woman claims she suffered serious injuries and can’t afford the surgery; the hospital found Facebook pictures and videos from up to 17 days after the accident after showing her frolicking in the snow. 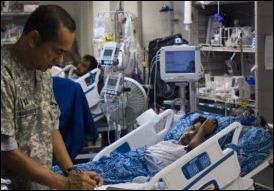 From Anotherdrgregg: “Re: your recent piece on gimmicks. Preparing for our EMR, we looked at all our diets, some 30 in all, including the oddly named ‘anti-atherogenic diet.’ We reduced the number of diets to four, not including bariatric diets. The reasoning was that if you could hold it down, you were probably going to be discharged home. Administration nodded sagely, then went ahead with diet on demand complete with special breakfasts and a chef in a toque. Now they want to know why utilization is not high.” Any reader who can use the word “toque” gets my vote. He went on to list other frivolous hospital expenditures: flat screen TVs, real oak moldings on the doors, and carpets so thick that you can’t roll a gurney on them. He closed with this thought: “The finest hospital I ever worked at had painted cinderblock walls. it was a forward operating base.”

Hard to believe it’s almost June. In CMS terms, that means barely more than a month before Eligible Hospitals in the first year of Meaningful Use run out of time to begin the reporting period for Fiscal Year 2013. If you don’t start your reporting period by July 3, you’re out of luck as the federal fiscal year ends September 30.

Reuters Health reports that many health Web sites are too complicated and full of jargon, leading to confusion for patients. Instead of the fourth to sixth grade reading level recommended by the American Medical Association and the Department of Health and Human Services, the average reading level of online materials studied ranged from high school to college. Reviewers also found information that was oversimplified to the point of inaccuracy and large numbers of clichés at some specialty sites.

Scientists have often debated whether white coats and neckties spread germs. Unfortunately for fashionistas like Inga, handbags are now under scrutiny. Twenty percent of handbags studied had levels of bacteria high enough to cross-contaminate other surfaces. I wonder if the findings would also apply to brief cases or laptop bags?