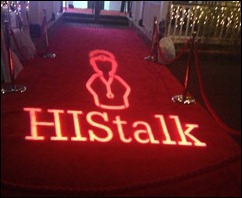 Tuesday morning came particularly early today after a long night of HIStalkapalooza fun. The Medicomp crew did an outstanding job, as did our emcees Lindsay Miller from RelayHealth, James Aita and Dave Lareau from Medicomp, and Jennifer Lyle from Software Testing Solutions. Thanks also to our shoe and fashion judges Timur Tugberk (DrFirst), Matt Holt (Health 2.0), and Jennifer Dennard (Billians). The attire was a fun mix of bowling chic, serious chic, and a few vendor-logoed t-shirts. And plenty of fun shoes!

I tried the Typhoon Jayne and Hurricane Inga, but quickly decided both would be a bad choice for a long evening. The food was yummy, especially the jambalaya. I haven’t heard who won the bowling tournament but everyone seemed to having fun. The Medicomp team will need to advise us on the final number of attendees but I am sure it was north of 700. And, the music was definitely hopping. I didn’t take too many pictures but I have seen a few on Twitter (#histalkaplooza if you want to check them out). I will find a few good ones to share. 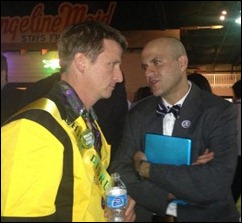 Jonathan Bush and Farzard Mostashari had what appeared to be a serious discussion. 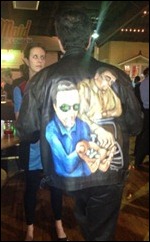 I have noticed several Regina Holliday jackets, both at HIStalkapalooza and at the convention center. She was in attendance and had many admirers saying hello. 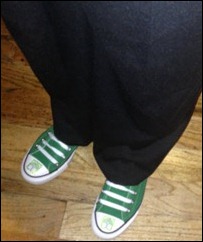 The ESD folks collectively won best bowling shoes, which included a sparkly version of their logo on the toes. 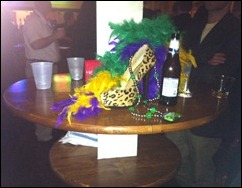 More than a few fabulous shoes were removed from tired feet late into the evening.

I went to the ONC Town Hall Monday afternoon, which was just OK. I was hoping for breaking news, but it was more of an introduction to some of the ONC leadership team. I spent the afternoon walking the exhibit hall before watching my BFF do a fabulous job playing Quipstar at the Medicomp booth. 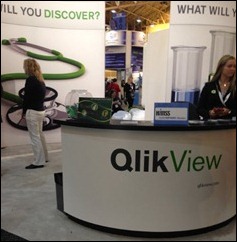 Thanks QlikView for having your HIStalk sign out. Many other sponsors found a spot for a sign as well, which we appreciate. Be sure to tell these folks thanks for supporting HIStalk. 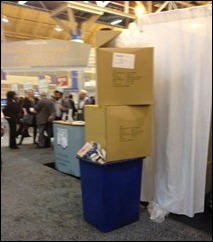 I noticed several overflowing trashcans, leading me to believe the convention center may have a shortage of workers.

Hot shoes outside the athenahealth booth. 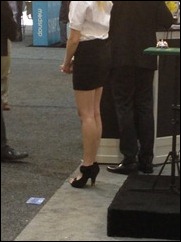 Another hot look, though I can’t imagine how her whole body felt by the end of the day. 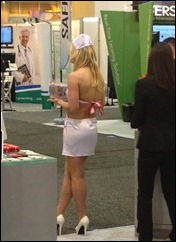 I did more cruising than I actually taking time for demos, though I did see a quick run-through of CareCloud’s newest EHR version. 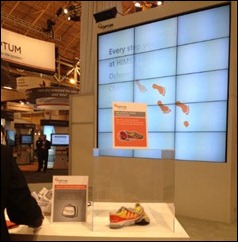 I got a pedometer from the Optum booth. I only had about 2,500 steps by the time I left the exhibit floor, but I only wore it a couple of hours. Optum is donating money to charity for every step logged.

Generally most booths seemed quite busy throughout the afternoon. I didn’t pick up too much swag, but the OnBase chocolate was super yummy. HealthPort was giving out beignets but told me they could not give me one since I am not a provider. Did I mention it was a beignet and not an iPad??? 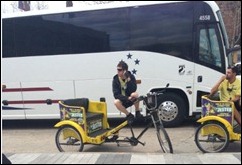 Attendees had multiple transportation options after a long day.

I’m out the door to hit the opening session, then will spend some time digger deeper at the exhibit hall. Dr. Jayne has us all lined up for parties tonight, but I may need extra caffeine to survive.