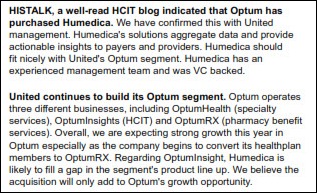 From Optumized: “Re: Optum’s acquisition of Humedica. Confirmed by Lazard Capital Markets.” I appreciate that the update from Steven Halper, managing director of equity research, credited HIStalk as the original source (as I, in turn, should thank Embers and another couple of readers who tipped me off). A Boston Business Journal article says the acquisition is valued by an insider in the hundreds of million dollars. I interviewed Humedica President and CEO Michael Weintraub a year ago. I notice that the Boston paper is getting credit for breaking the news with its Friday afternoon article even though I ran and confirmed it Tuesday evening with the help of readers.

From False Positive: “Re: Farzad’s rebuttal that talks about ‘cynical critics.’ Who are they? How does he know that they don’t like paper?” The cynical critics, at least those constantly seeking attention, are easy to spot because they sing only one loud and sustained note. When I read an emotional, overwrought restaurant review on Yelp, I always click that person’s profile to see if they have a mix of positive and negative reviews and ignore them if not. Likewise, I twit filter the monotonic EMR whiners and cheerleaders alike, placing a lot more value on the 80 percent who don’t flaunt their blinders publicly. Farzad was right about the RAND study – they said their original projections about EMR savings were wrong because EMR adoption was less than expected and payment incentives are still screwed up. The job of EMRs is to support reform, not to create it. He’s also right that those cynical critics haven’t written smug and pedantic articles extolling the virtues of paper medical records, so they’re leaving us to breathlessly anticipate their suggested alternative. And if they’re intentionally avoiding EMR-using doctors and hospitals for their own care, they aren’t blowing that horn either. What they should be criticizing is the healthcare system that created the current batch of EMRs that conform precisely to its ridiculousness. 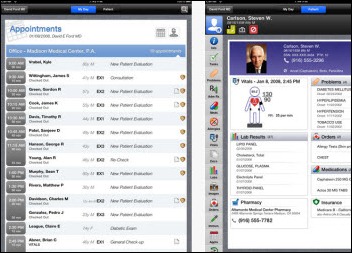 From The PACS Designer: “Re: TPD’s List. The recent update of TPD’s List of iPhone Apps that added a HIStalk Sponsors section has created new interest amongst them to recognize their iPhone apps. Vitera informed us about an app (above) that provides healthcare providers access to their Intergy EHR solution enabling anytime, anywhere access to schedules, tasks, patient records, and e-prescribing. Humetrix alerted us to several iBlueButton apps they developed with HHS. These new apps will be added to the next TPD’s List update.”

From Ear-Ground Continuum: “Re: MEDecision. Huge downsizing – they let 83 people go last month with another round this week and next.” Unverified. Recent comments on Glassdoor are certainly interesting. UPDATE: Verified by a reader’s link.

From Nasty Parts: “Re: Greenway reseller iPractice Group. Closed its doors today. Sources say cash flow problems despite strong sales, so the board pulled the plug.” Unverified. I e-mailed the company but haven’t heard back.

Speaking of the RAND study, more readers think it was naïve rather than biased (and yes, RAND should be capitalized, at least if you buy the idea that it’s OK to make up acronyms solely to create a conveniently pronounceable word, in this case Research ANd Development.) Anyway, new poll to your right: if you had to buy a vendor’s stock, which of the five listed would you choose?

Several readers (me included) expressed an interest in hearing more from Robert D. Lafsky, MD, whose guest articles always contain an impressive mix of medical knowledge, wry cynicism, and grammatical excellence (he always e-mails me when he finds my mistakes, and the threat of incurring his gentle wrath caused me to double-check the spelling of RAND). He has agreed to elevation to regular contributor under the nameplate The Skeptical Convert, with his first installment running this weekend.

Welcome to new HIStalk Platinum sponsor The McHenry Group, an executive search firm focused entirely on the healthcare software and services vendor market. TMG’s team of search consultants averages more than 11 years with the company, having placed over 2,000 candidates since 1991. TMG has developed the industry’s largest candidate database of hard-to-find talent, including the hidden candidate market. The company conducts videoconference interviews with every candidate and forwards the videos of the strongest to the client for their review which moves things along faster and gives a better fit, enabling TMG to offer an extra-long 12-month replacement guarantee. TMG has filled positions for CEO, COO, CMO, CMIO, SVP, business development, sales VP, and informatics roles for companies such as RelayHealth, McKesson, Orion Health, and Health Language. They have conducted searches across the entire US as well as for non-US companies building their US operations. Featured business development stars are experts in clinical software, Meaningful Use, and payor technology, while project manager and implementation candidates are available in EMR, multi-hospital implementations, and client services. TMG provides well-screened candidates, ethical search consultants, and a promise to understand the client’s business needs. Thanks to The McHenry Group for supporting HIStalk.

Athenahealth files notice with the State of Alabama that it will lay off 36 employees at its Birmingham office on March 6. The company has not announced what types of workers are affected, although Birmingham was the location of Proxsys, the care coordination systems vendor athenahealth acquired in 2011 to boost its athenaCoordinator product.

Compuware turns down the $2.3 billion buyout offer of Elliott Management Corp and says it will instead spin off Covisint as originally planned. 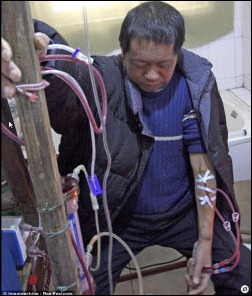 Weird News Andy says this is better than die-alysis. A kidney patient in China who can’t afford dialysis treatments has lived for 13 years so far by dialyzing himself three times each week using a machine he built from kitchen tools and old medical equipment. He recently declined the Chinese government’s offer of free dialysis that was extended after his story was picked up worldwide, saying the hospitals are too far away and too crowded. He’s not worried that two of his friends died after trying a similar setup.

Farzad Mostashari can bask in the knowledge that he’s a big enough name to be featured in a CAP News parody (it’s like The Onion, but not as well done). I think they probably chose him randomly for the article Toilet Sizes Expand to Meet Needs of Obese Nation, quoting him in describing a new HHS standard called “Ass Cheek/Toilet Seat Ratio.” 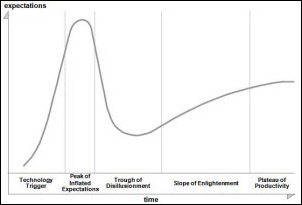 Gartner says Big Data has reached the Trough of Disillusionment stage of its ingenious Hype Cycle, of which I’ve been a long-time fan. If the author is correct – and I would say she is – the previously Big Data-fawning press will start running negative articles, which is OK since once that negativity has been purged, it’s on to the Trough of Enlightenment, where organizations whose interest is more than fad-chasing start delivering results. A Wall Street Journal blog post on the Gartner item quotes Aurelia Boyer, CIO of New York Presbyterian Hospital, who says they’re using Hadoop with natural language processing to analyze millions of patient records to find, for example, how many of them have mentioned a gunshot wound.

A study looks at why patients may think doctors who use clinical decision support are less capable. Apparently patients worry more about doctors using non-human tools rather than having a doctor who seeks external advice.

An online publication HITECH article elicited interesting comments. Granted some of them veer into death panel nut job territory, but they’re still fun to read and some are insightful.

I’m scooping Weird News Andy on this story: a drunken Englishman is hospitalized after the paramedics he called found his frigid sexual partner dismembered in a snowy field. The partner was a snowman; the man’s injury involved frostbite of his manhood, which nearly required amputation.

It’s NextGen Part 3 from Vince this week as he covers Opus Healthcare Solutions.